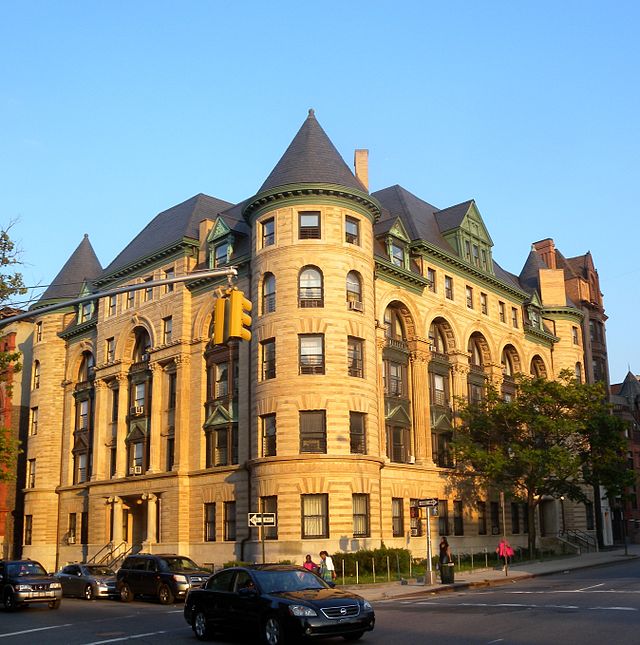 The Imperial Apartments on Bedford Avenue were built in 1892. Photo: Jim Henderson

There’s no doubt that Crown Heights is one of Brooklyn’s most rapidly changing neighborhoods. It seems like every week we hear about a new restaurant, bar or shop that’s opening in the area, and the variety of row houses and expansive pre-war apartment buildings, as well as convenient access to several train lines, are drawing new residents in droves.

Once called Crow Hill, Crown Heights is bordered by Bed-Stuy to the north, where Atlantic Avenue forms the boundary between the two neighborhoods. To the south, Empire Boulevard separates the neighborhood from Prospect-Lefferts Gardens and East Flatbush. Prospect Park and Washington Avenue (though some argue that Franklin Avenue is actually the boundary) form the western border, shared with Prospect Heights. And to the east, of East New York and Ralph Avenues lies Brownsville.

While Eastern Parkway is the main transit hub for cars and for the 2, 3, 4 and 5 train lines, Franklin Avenue is the neighborhood’s up-and-coming main drag, home to an ever-expanding selection of shops and restaurants, and Nostrand is the busiest commercial strip, lined with long-time stores and services.

Crown Heights remains a diverse neighborhood, even by New York City standards. There’s a large population of Hasidic Jews living in the area, which is also home to one of the largest Caribbean populations outside of the West Indies–a combination that turned explosive during the 1991 Crown Heights riots, which erupted after the death of Gavin Cato, a 7-year-old who was hit and killed by a Hasidic driver. More than 20 years later the Hasidic and Caribbean communities share the distinction of being the old guard amid waves of gentrification.

“The Caribbean presence in Crown Heights is ubiquitous,” says Saiyd Roberts, a 20-year resident of East Flatbush/Crown Heights. “From the music being played out of people’s shops, cars, and homes to the language and accents heard while walking any street, Crown Heights is a blend of Caribbean cultures. It is a second home to all of the diaspora and most folks in the English [speaking] West Indies have family here.”

“You live here for a year and you see a lot of changes,” says Michael de Zayas, a Crown Heights resident and owner of three local shops. “We have a mix of Caribbean families who have been here for decades and a younger, white after-college crowd that brings a lot of energy. You have a nice set of people mixing and exciting new businesses popping up.”

“It is a neighborhood for the people,” says Georgia Kral, a Crown Heights resident of one year.

So what should you hit up if you’re headed to the area? Here are a few of the favorite local spots. 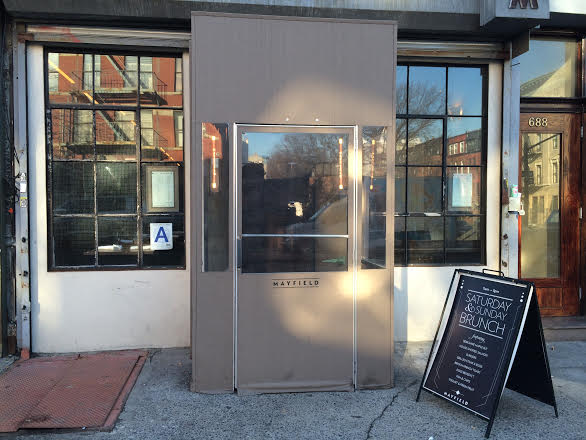 Where to eat: Mayfield is a popular seasonal American spot operated by Crown Heights local Lev Gewirtzman. Crowds flock here for the dollar oyster happy hour and upscale soul food selection. “I think it’s the best food,” says de Zayas. “In my opinion it is one of the best restaurants in Brooklyn and it is great to have here.” If you are feeling decadent, Kral recommends the chicken liver mousse. For pizza, Barboncino serves up brick-oven Neapolitan pies like the sopressata picante, which is topped with organic Italian tomatoes, fior di latte, garlic, oregano and extra virgin olive oil.

When it comes to Cajun/Creole/BBQ, Catfish pulls inspiration from New Orleans and offers dishes like gumbo and shrimp and grits served up in a rustic dining room or sweet backyard. “This place is packed all the time,” says de Zayas. Catfish is also a great spot to grab a cocktail like a Lady Laveau, made from absinthe, St. Germain and cucumber lemonade.

For Caribbean cuisine, head over to Gloria’s and order some curry or roti, available for eating in or taking out. “Their jerk chicken is really good,” says Kral. Mango Seed [in nearby Flatbush] is also a popular Caribbean spot, attracting patrons with upscale cuisine, outdoor seating, and a rum bar happy hour. “Their Rasta Pasta is on point,” says Saiyd Roberts. Roberts is also a fan of Allan’s Bakery on the border of Crown Heights and Prospect Park Lefferts Garden. Serving up fresh baked Caribbean pastries and cakes, Allan’s offers a variety of fresh breads, currant and coconut rolls, buns, and cookies, as well as chicken and beef patties. 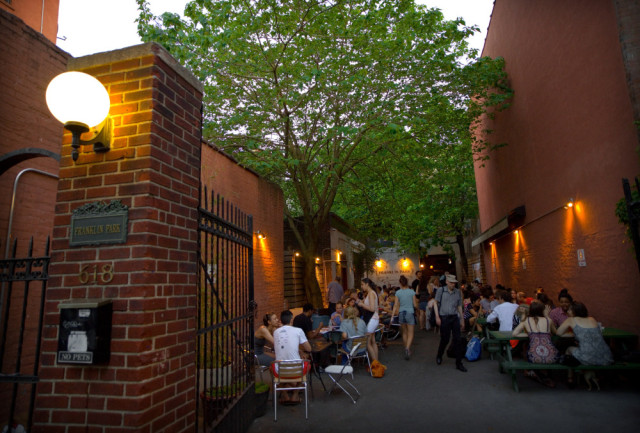 Where to drink: Nostrand Avenue Pub has a big backyard with lots of picnic tables for sipping and lounging. Inside, the space offers a long wooden bar complete with craft beer taps and snacks. For cocktails in an intimate setting, The Crown Inn offers patrons black leather booths and wooden floors as well as a pretty backyard. The cocktail menu gets creative–a drink called Dandelions combines gin, maraschino, Suze (a French brand of bitters that’s heavy on the gentian), lemon and salt. Want to hit up a bar with more than just booze? Franklin Park is a popular neighborhood beer garden, offering a DJ, games, fireplace, and large outdoor drinking space. “It is always a scene,” says Kral of her favorite bar. “The drinks are basic–beer and shots–but if you are looking for a fun night out that’s the place. It is big and attracts a mix of people.”

Where to take the kids: With a growing number of families moving into the area, many are seeking out places to take their children. “I think Crown Heights is a special place to be a young family,” says de Zayas, who also started the Crown Heights Parent Association. “There is a village atmosphere.” As for kid friendly destinations, de Zayas is a fan of the Brooklyn Children’s Museum. “It is one of the neighborhood’s key assets,” he says. The museum offers after school activities as well as programs like Bug Out! where the kids get to play around with worms, grasshoppers, stick bugs and more.

Straddling the line between Crown and Prospect Heights, Brooklyn Botanic Garden is free for children under 12 years of age. The BBG is not only beautiful for walking around and checking out the flora, but also offers activities and classes in the winter. Want something free and easy? Brower Park is located in the heart of the neighborhood, and provides children with a playground and spray fountains in the summer. Adults can enjoy the handball and basketball courts as well as the tree-lined fitness paths for running or biking. For indoor movement, The Stomping Ground is a kids’ play space run by parent volunteers. 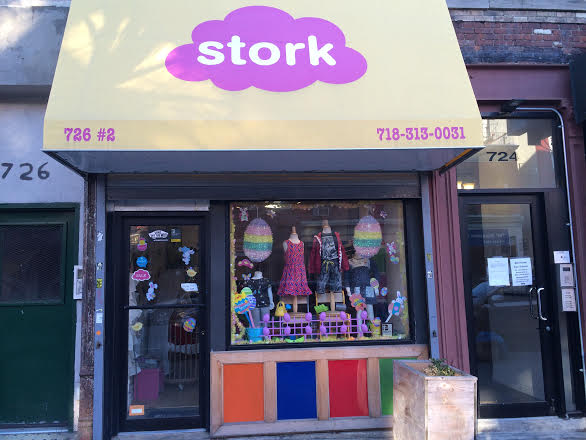 With the Brooklyn Children’s Museum nearby and shops like Stork, Crown Heights has a family friendly reputation. Photo: Gabrielle Sierra

Where to shop: For some fun buys, Kral recommends Cool Pony, which boasts antique wares, vintage clothing and accessories, and lots of music from rock to blues. Rosebud Vintage is jam packed with adorable old-fashioned items that have been carefully selected and curated. For books, stop into the micro-sized Hullabaloo Books, opened by de Zayas in the fall of last year. “I like to say that we are the smallest bookstore in the country and the largest in Crown Heights,” he says. Stop into Stork for infant and toddler clothes, furniture, toys and gifts. Bicyclists who need a tune-up, some gear, or a new ride can head over to Bicycle Roots for everything from baskets and bells to mountain bikes. For your garden (or window box) bring your green thumb to Natty Garden on the border of Crown Heights and Prospect Heights. This nursery sells everything from potted plants, fruit trees, and seeds to Christmas trees in the winter.

Were to get caffeinated: Little Zelda, owned by Michael de Zayas (and named after his daughter), is known for its drip coffee, cold brew, and kick-ass cheddar and chive biscuits. “It is very intimate and has a friendly European feel to it,” says de Zayas. When it comes to pairing your coffee with some sweets, try Richol Bakery for a café au lait and one of their fresh baked pastries (the pain au raisin is a great choice). The space also offers free wifi. Bread Love, on the Crown Heights/Bed-Stuy border is an urban farm-stand offering fresh produce, breads, cookies and cakes, and delicious coffee. There’s an outdoor patio to enjoy during warm weather. [UPDATE: Bread Love is currently closed due to a fire, check their website for pop-ups around the neighborhood and news about re-opening.]