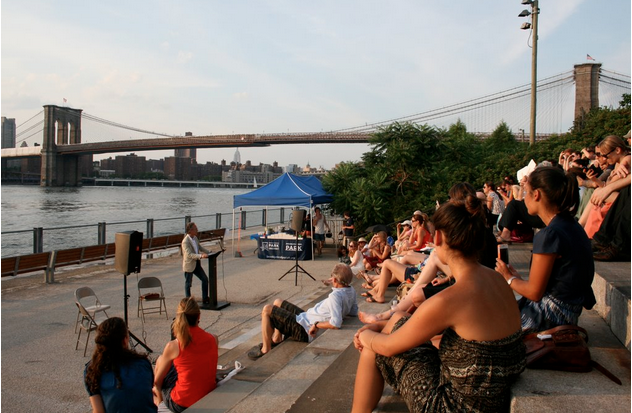 Back for its third year, Books Beneath the Bridge is quickly becoming a staple of Brooklyn’s summer reading series.

For the past two summers, Brooklyn Bridge Park Conservancy has invited local independent bookstores to curate readings for its Books Beneath the Bridge series, which takes place on the steps of Pier 1’s Granite Prospect overlooking the East River. With the Manhattan skyline as a backdrop and the Brooklyn Bridge to the right, it’s a pretty picturesque place to spend a Monday evening enjoying readings from the likes of Patti Smith, Colson Whitehead and Lizz Winstead. This year’s lineup looks to be another great group, starting with a reading organized by Freebird Books on July 7.

Elizabeth Mitchell will kickoff this year’s series by discussing the history of the Statue of Liberty and reading from her book, Liberty’s Torch. The 151-foot gift from the French has been greeting the world’s tired, hungry and poor in New York Harbor for the past 128 years, not to mention a countless number of tourists on city cruises, too. Mitchell’s talk, as well as all the rest of this summer’s readings, starts at 7pm. Here is a rundown of what else to expect over the next six weeks—including a night with the new Morbid Anatomy Museum we filled you in about last week.