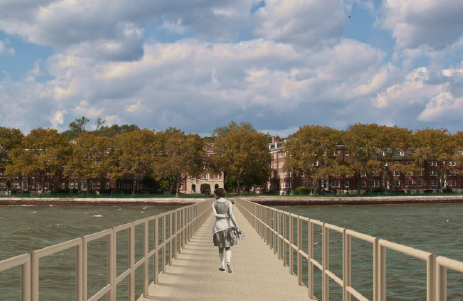 At one point in time, you could walk from Brooklyn to Governors Island. During low tide, as one story by Walt Whitman goes, Revolutionary War-era farmers would walk their cows across a sandbar to graze on the island. If they were too late in walking back, and the tide rolled in, The Brooklyn Daily Eagle further reported in August of 1900, the water would affect the cattle’s “lacteal processes,” and result in sour milk. Which is one of the most tantalizing explanations for how this tidal straight, long since dredged for cargo ships, came to be known as Buttermilk Channel.

Artist Nancy Nowacek discovered this story after moving to Columbia Street a few years ago. From the back windows of her apartment, she could see Buttermilk Channel and Governors Island, and it struck her that the island seemed terribly close. In fact, it’s only roughly 1,200 feet away, the equivalent of four city blocks. “You think about that as a New Yorker, “ says Nowacek, “and you think, ‘That’s nothing.’”

She soon found herself imagining ways to reconnect the island to Brooklyn. It had been attempted before—Robert Moses once proposed a superhighway bridge connecting the Belt Parkway to Lower Manhattan via Governors Island, and the Spanish architect Santiago Calatrava envisioned a futuristic gondola. But both these ideas seemed out of scale to Nowacek, too capital- and labor-intensive to bridge such a small distance. So, said Nowacek, “The question became ‘Could it be possible to reconnect Brooklyn to Governors Island by hand, with the most minimal means necessary, without large, industrial infrastructure?’” For the past two years, she’s been answering that question, and has already developed working prototypes, one of which she’ll unveil at City of Water Day on Governors Island tomorrow. 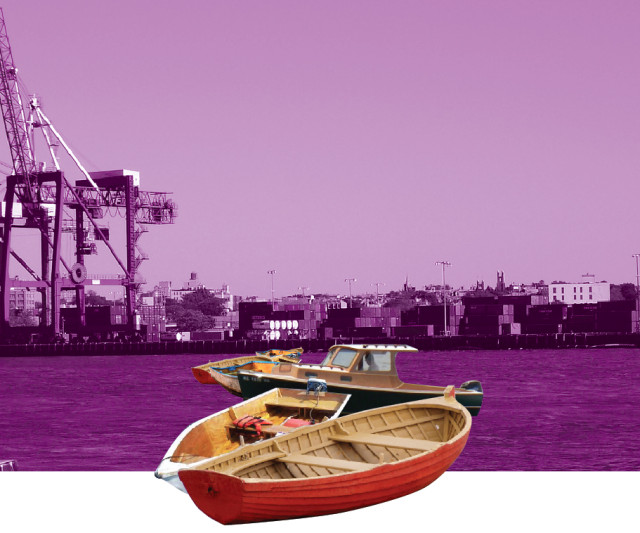 The public will be invited to climb upon this fourth prototype on Colonel’s Row, on Governors Island itself. (A test on water, the third to date, is scheduled for later next month.) This latest version of Nowacek’s grand vision is a far cry from her initial sketches, some pretty wild ideas that she developed without consulting any of the experts that now advise her. One depicted a string of adult-sized hamster balls, another a flotilla of boats, still another a bridge constructed of stitched-together pool floats, all highly creative scenarios that seemed a little tricky to actually walk across.

“I didn’t know much, but I knew I needed to talk to the Coast Guard,” Nowacek said. She presented her ideas to the Waterway Management Division and they considered them, advised her on the ways to get the project off the ground, and told her they could imagine closing Buttermilk Channel to traffic to allow it to happen–for just one day.

It was just enough encouragement to continue Nowacek’s quest to build Citizen Bridge, the name she’s given her vision of a floating bridge from Red Hook to Governors Island because of the group effort it requires. Around a hundred people have contributed their time and expertise to the project so far, from a captain named John Doswell to architect Brady Caldwell to students at the Webb Institute, a college for naval architects and marine engineers on Long Island. “It’s really nothing that can be done alone; it’s done completely through the efforts of citizens banding together from the ground up. Rather than the top down.”

A participatory work called “Karaoke Ice,“ a karaoke-rigged ice cream truck, was Nowacek’s first foray into public art. She collaborated on the project as a graphic designer, but seeing people interact with her work inspired her to shift her talents to the public sphere. Now she describes her practice as “trying to create new interfaces for togetherness.” 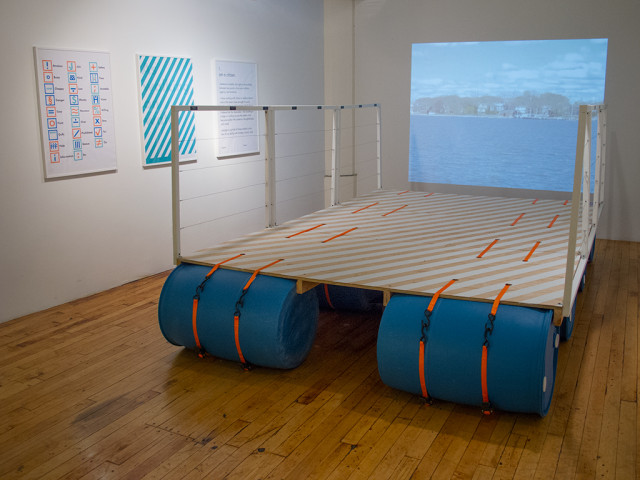 She described the genesis of Citizen Bridge as we sat together in her studio at the Marie Walsh Sharpe Foundation in DUMBO, a prestigious organization that grants roughly 20 visual artists free studio space for one year.

A working section of the bridge sits on the floor of the white room–eight-foot-wide planks of plywood that are fastened to shipping drums for buoyancy, with railings on either side to provide a much more stable, sea-worthy design than her initial visions.

Taped to the walls are photos of two Citizen Bridge test runs in the New York harbor, in which some life vest-clad people appear to be walking very carefully on a floating dock. Above her desk is a map of the New York harbor, and on a shelf beside it, Nowacek is compiling a stack of correspondence to date. She’s printed out every email exchange about Citizen Bridge, and has tied them together with rope. It’s now three reams high.

“When I started this project,” she said, “I thought I could do it in the first six months of the residency. I think after maybe the first five weeks, I realized that I would be lucky if I could complete it in the course of two or three years. Now I’ll be lucky if I can complete it in another two to three years but the longer I do it, the more possible it seems so it’s worth the commitment.” 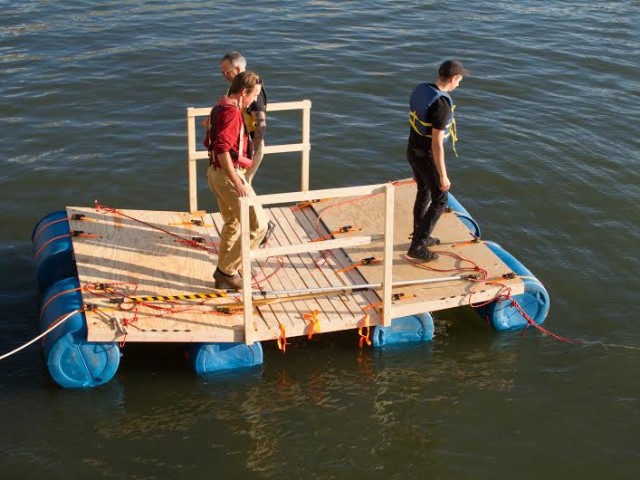 Nowacek estimates that the price tag for Citizen Bridge will total roughly one million dollars, to cover not just the construction but also, “safety boats and dive rescue experts and loading cranes. All the things that are actually going to be necessary not only to get the structure in the water but to keep it stable and make it safe and make it a really lifelong, memorable experience for people.”

If that seems like a lot, it’s worth considering that Olaf Eliasson’s “The Waterfalls” cost over $15 million, “The Gates” $21 million, and the Floating + Pool recently ran a Kickstarter to make a dent in the $100,000 needed to test its filtration system.

Of course, Citizen Bridge will only be open for one day, which Nowacek roughly predicts will be broken down into three parts—eight hours to set up, eight hours to walk across, eight hours to break down. She has no intention of compromising a major shipping thoroughfare, and recognizes that closing the channel just one day will impact the flow of barges, Water Taxis and cruise ships that use it.

If the city deems it a success, Citizen Bridge could be installed annually, on City of Water Day perhaps, or perhaps it will just exist as that day when some lucky New Yorkers got to walk across a stretch of the New York Harbor you can only cross by boat. “There will be some ceremony to it,” muses Nowacek, thinking about that moment.

Beyond the sheer experience of walking across Citizen Bridge, Nowacek points to the innovative ideas that could follow in its wake.

“Water is a huge part of our collective global future, and I think putting resources to learning how to engineer all sorts of things on the water is really important. It’s clear that flood conditions and weather events are a foregone conclusion in the future of our city. I think art is a great framework to investigate these ideas because it’s not held to a bottom line, it’s not held to a kind of research outcome, but it does start to require thinking towards those other ends and it does catalyze people’s imaginations with wanting to be involved in those sorts of bigger projects.”

Earlier this week, she sent an email inviting volunteers to help build the latest prototype today, on Pier 101 in advance of City of Water Day tomorrow, where, along with cardboard kayak races and other events celebrating the waterways of the city, she’ll be demonstrating the latest design on Colonel’s Row. While the prototype in her studio features eight-foot-wide planks that would allow for two-way traffic, students at the Webb Institute suggested a four-foot-wide expanse instead. This would transform the experience into a one-way crossing, but could potentially make it easier to traverse.

“I think the magical thing about the project is that it seems utterly impossible yet completely possible,” said Nowacek. “It’s the tension of those two things that I think makes it really exciting.”

To learn more or get involved with Citizen Bridge, visit CITIZENBRIDGE.TUMBLR.COM and CITIZEN-BRIDGE.COM.