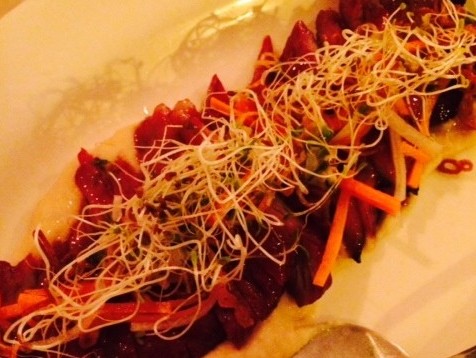 Many years ago, I spent a college summer living with my aunt and uncle and their two young kids in Cambridge, Massachusetts. Among the many things about this arrangement that benefitted me, I had access to the excellent homecooked Cantonese food prepared by my cousins’ babysitter, a neighbor and Chinese immigrant named Yuan Yuan.

I’m happy to report that the soy sauce chicken at 2 Duck Goose, a new Cantonese spot that just opened on the corner of Fourth Avenue and Sixth Street, is just as good as the version I ate in my aunt and uncle’s kitchen so long ago.

In particular, I remember Yuan Yuan’s soy sauce chicken– drumsticks and wings marinated and simmered for the better part of a day in dark brewed soy sauce, ginger, and garlic until the meat and skin turned deep mahogany. It was a revelation, salty and tender and equally delicious when served hot or cold, which I discovered when I stumbled in one night after too many drinks and found leftovers in the fridge. I begged Yuan Yuan to teach me to make it and she graciously agreed, but it was one of those maddeningly vague lessons you get from an innately skilled chef, with instructions like “add some spices” and “cook until you feel like it’s done,” that was way over my head at the time. I think I tried once in vain to make it for my roommates when I got back to school and promptly gave up the dream.

I’m happy to report that the soy sauce chicken at 2 Duck Goose, a new Cantonese spot that just opened on the corner of Fourth Avenue and Sixth Street, is just as good as the version I ate in my aunt and uncle’s kitchen so long ago. The restaurant, which is still serving a limited menu during its soft opening, is the joint venture of three friends, a former lawyer, a former finance guy, and a Hong Kong-raised chef. Traditional dishes like char siu–slow roasted pork served at room temperature, are well-prepared with a modern twist—the “seasonal” version I tried came with pickled daikon and celery root puree. The Cantonese Roast Duck Feast, which costs $100, serves three to four people and requires 24-hour advance notice, is something that I hope to partake in on a return visit.

The space is simple and industrial, with whitewashed exposed brick and light bulbs hanging from lengths of rubber electrical cord, and when we were leaving after dinner on Sunday night the friendly owners were cutting pieces of foam eggcrate to stuff under chairs to absorb noise. 2 Duck Goose is laid-back, cheerful addition to the immediately surrounding area, which is currently at risk of being taken over by an influx of sterile highrise development. Most importantly, the food is good, and a great option for dinner if you live nearby or are in the neighborhood for The Bellhouse, Royal Palms, Whole Foods, or any of the other new attractions that continue to spring up in Gowanus with no sign of imminent abatement.