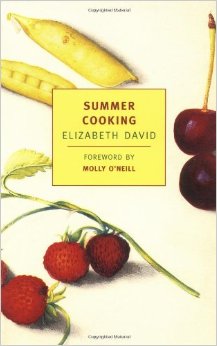 Our cooking advice column, Dear Liza, is penned by Liza Queen, one of the pioneers of the New Brooklyn food scene. Her restaurants Queen’s Hideaway and later Potlikker both attracted a cult-like following and transcended easy categorizing, save for their reliance upon Greenmarket fresh foods and Queen’s Southern-tinged style of cooking. Now she is between restaurants–and fortunately for us, answering questions from inquisitive home cooks. Send her your questions here. This week Liza shares her culinary must-reads with us.

Let just say, for simplicity’s sake, that Elizabeth David was Britain’s Julia Child. Like Julia Child, she wrote books on food and cooking post World War II, focusing on fresh ingredients and country/home-style cooking of the Mediterranean at a time when processed foods and the mechanization of the food industry was in full swing, new enough and useful enough to be much celebrated.

It is said that she did not like to talk about herself or give away personal details of her life, and that people were always shocked by the “unconventionality” of her life when the prose in her cookbooks was so “dull.”

I always thought that perception was deeply strange as, when I read this book, I always thought her voice and personality come through so clearly: a dry as a bone wit, an impatience with laziness or stupidity, a withering hatred of inferior product, all surrounded with a true sensualist’s love of beautiful food and an awareness of how context fuels the feeling of a meal.

I absolutely loved her for it, finding myself giggling my way through this cookbook at little well turned, subtle digs placed within the body of a recipe. Any fans of George Eliot, Jane Austin, or the TV show Empire can tell you how entertaining this can be, especially when it is coming from somebody who so clearly has a deep well of decency and kindness.

The section titled “Picnics” may well be one of my favorite pieces of writing in any cookbook ever. Nine pages that managed to cause in me a painful and intense nostalgia for a time and place I never knew. It is also a decent shorthand for how to live well, peppered with hilarious and salty turns of phrase like referring to anchovies as as “squalid mess.”

Her recipes in Summer Cooking are, at first glance, incredibly stripped down. Many recipes march down the page at a two-inch clip. Elizabeth David is no hand-holder and she assumes a certain amount of knowledge. That being said, I cannot think of a better book to have in your library during the growing season. Pick an ingredient, find the section in the book, and you’ll have five or so options on what to do with your beautiful, local produce, all of which are centered around the idea that your job, when lucky enough to have access to in-season, potent summer produce, is to coax out the very best of it, without ever overwhelming the essence of the thing. It is the epitome of ego-less cooking, and the antithesis of celebrity chefdom. 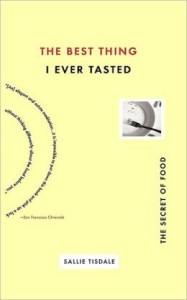 The Best Thing I Ever Tasted by Sallie Tisdale

This last one is a bit in the realm of required reading, as it is an academic, though intensely readable, look at the history of the mechanization of the food industry post World War II and the emergence of the farm-to-table movement.

I was fortunate enough to have a small parade of ex-Diner sous chefs at the Hideaway after Caroline Fidanza left the helm of Diner/Marlow & Sons. This book was given to my by the talented, sweet, and wonderfully cranky Rebecca Collerton, who is now one of the owners of Saltie. Those Diner kids were always a thousand miles ahead of me, and this was an important book to all of them in the kitchen there, and like many things, I caught on much later and with much gratitude.

Tisdale manages to merge a very warm and personal voice with thorough historical perspective as well as a rigorous examination of what how recent world history played out in the realm of cooking and everyday lives. Her simple premise, the idea that “cooking dinner” is a product of hundreds of years of cooking in homes, and reflects place and time like few other disciplines, that is is tied to class, gender, science, economy, etc, is not a new one. Oddly, though, I cannot think of many other books that cover this same territory so well and in such a clear and readable way that are not cookbooks themselves.

Also she is damn good with the words. My own copy is littered with scraps of paper marking sentences I found enlightening, or just plain old beautiful, like this “. . .the bleak, petty despair of a dirty kitchen after a bad meal, after small disappointments.”

I re-read this book last summer, and I was struck by how different the experience was from when I read it back in 2007 (the book itself came out in 2000). In 2007 it felt like a call to arms and a clarification of all the disordered, undisciplined, academically un-rigorous, incoherent thoughts I had in my head about food and cooking.

In 2015 it feels a little bit. . .well, sad. For one, through no fault of her own or the book, she strikes me now as kind of starry-eyed. She doesn’t know yet that the farm-to-table movement itself will soon become a marker of class, and will fail to be as inclusive of the many women who helped create and champion it, as one might think. Or that many of it’s advocates will end up thinking and reacting in the same old knee-jerk, short sighted, failing to read and understand the science or economics, kinds of ways as the corporations they claim to stand against.

The publication date is proof of how quickly this particular movement was commodified and branded, and how little we really took in. If I could, I would make it impossible to buy, in all of Brooklyn, any reclaimed wood, any Edison bulb, any product from the farmer’s market, any meal at a “Brooklyn” restaurant, any food at Smorgasburg and the various Fleas, without having read this book. 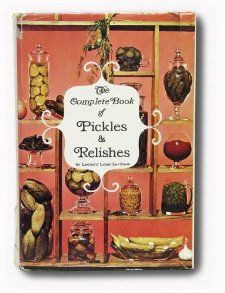 The Complete Book of Pickles & Relishes by Leonard Louis Levinson

This book was given to me by an insane woman who I came to despise not long after meeting and working with her. It is a testament to the usefulness of this book that I did not burn the thing in a fit of rage upon realizing that she had hacked into my recipe files and deleted them all.

No doubt there are better cookbooks out there now about fermentation and pickling, as it a subject that has already ascended to popular status, and long since rounded the bend to satire (see: Portlandia episode: “We Can Pickle That!”). This particular book, published in 1965, is not going to lay out the science involved in fermentation, or identify different kinds of bacteria in different methods of pickling.

It is, however, a wonderfully old fashioned and complete book of pickles and relishes, and includes both quick and fermented pickles. I tend to use it to remind myself of forgotten relishes, (“Oh yeah, Piccalilli!) or to compile a list of common pickling spices for different vegetables so that I can decide which flavor profile I’d like to use. It also has sections on homemade condiments and chutneys.

If you, like most people, have a tendency to buy more than you need at the farmer’s market because you went and got yourself seduced by the bounty, but then find yourself angry that your six-dollars-per-pound whatever is going to rot because you bought too damn much of it, pickling and relishes are the best solution.

The book is particularly useful as, like Elizabeth David’s Summer Cooking, it is organized by ingredient. So if you were to have too much of say, green tomatoes or baby carrots or corn or cucumber or baby bell peppers, you can just find that section and have between five to ten different types of pickles and relishes that star that particular ingredient. So handy! 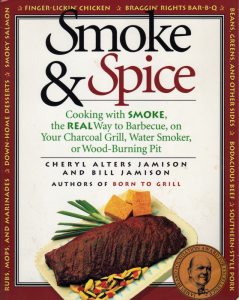 This book came out in 1994, at a time when most people would ask you to come over for a barbecue, and what you would find were burgers and hotdogs slowing shriveling on a grill. If you were me, you were just barely were able to contain your rage at being so horribly tricked, and would try, with varying results, possibly depending on how overcooked the burgers were, to remain a gracious guest aware that any food offered is a kindness.

In short, it was a different time. BBQ had still not come much further north than Virginia or Tennessee, much less become one of the darlings of the NYC food scene. I write this because I have no idea if a better, more thorough book on BBQ has come out since then. Pretty much I read this thing, starting using the hell out of my smoker, gained a lot of experiential knowledge and never looked back.

In point of fact, I hadn’t opened this particular book in so long, as most of this knowledge is now completely ingrained, that I was thrilled to find, taped to the first page, an old Polaroid of the inside of my smoker in Austin. In the picture there is: a beer can chicken, two racks of pork ribs, a pork butt, and some sausage. (This particular smoker was huge, built by a friend who learned masonry in New Orleans from his uncle. It had a foundation, I kid you not.) I am beside myself with incredulity and glee at seeing this picture, as it was only my boyfriend at the time and me living in this tiny house, so I am wondering who in god’s name I was planning to feed!

I tell you this story as both a warning and endorsement for this book. There is a reason why there are so many BBQ obsessives out there, and it is because it is one of those dead simple cooking techniques that can require of lifetime to perfect to one’s taste.

This book does a great job of laying out the basics: types of wood, smokers, temperatures and timing, cuts of meat, sauces, mops and rubs. Even better, they pay real tribute and time to regional styles, as well as dipping down a bit into Mexico for some sauces of which even Diana Kennedy or Rick Bayless might approve.

Real BBQ is tricky in NYC. Yards are scarce, small, and surrounded by neighbors that may not love your smoke as much as you do. My own smoker, given to me for my 30th birthday by my oldest friend and once used at Queen’s Hideaway, still bears the dents from when my landlord attacked it with a metal pipe and I had to call the cops. It now resides in said oldest friend’s backyard in Bed-Stuy. I see it maybe once a year where I give it a fond pat, promise I haven’t forgotten it, and apologize for the indignities of veggie burgers and marinated portobello mushrooms that come with being in the hands of a vegetarian.

But if you have all of the above worked out and your pretty little egg smoker is sitting there unused in your NYC yard, I highly recommend slash warn you about this book.