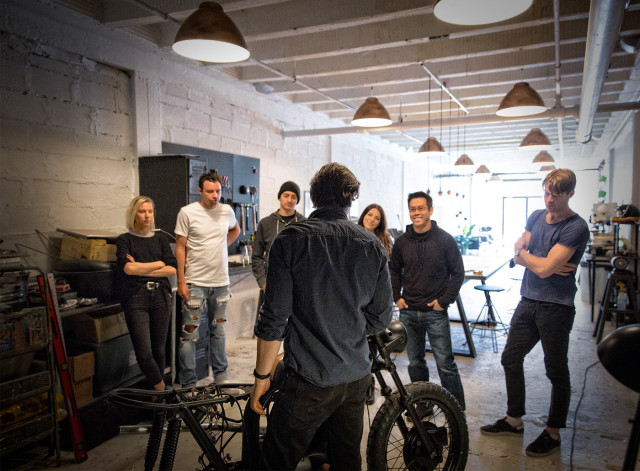 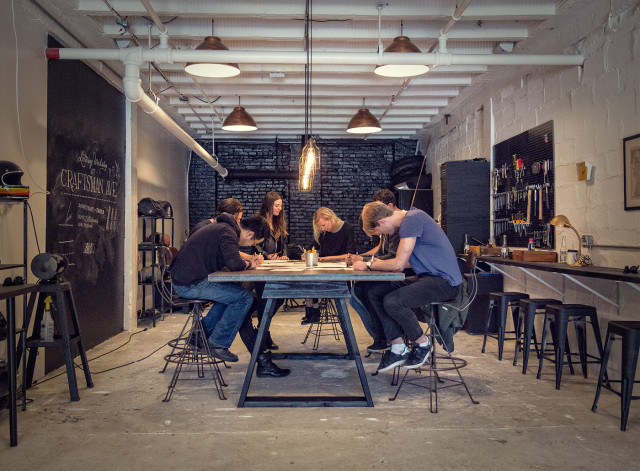 Inside Craftsman Ave., where intimate workshops on everything from letter making to woodworking will begin in July. Photo: Craftsman Ave.

Just steps from Lowe’s, and right next door to the Global Cooling Inc. HVAC shop on an industrial stretch of 11th St., a new school called Craftsman Ave. blends right in with Gowanus’s repair shops and fabrication studios. The only clues that it caters to a different clientele is the minimal, black and gold sign outside and the fact that it’s actively seeking unskilled laborers.

“There’s no place where you can learn everything from letter making to product design—basically every kind of skill you need to bring a physical product to life,” said Taras Kravtchouk, the founder of this DIY school. The digital and industrial designer discovered a love of physical work when he began restoring vintage motorcycles—two of which are on display inside his shop. He plans to teach this skill, and is inviting other artists and designers to teach similar, three-hour-long workshops on trades like woodworking and jewelry making. Those who are more serious about perfecting a craft can become members and use the professional woodworking, prototyping and welding tools to hone their skills. Ideally, with the right mix of instructors and members, everyone will learn from one another.

When I tell him there used to be a place like this called 3rd Ward, Kravtchouk agrees that the concept is similar. “I was aware of it—I believe they closed a few years ago and from the stories I heard it was poorly managed,” he said. Kravtchouk came to New York from Sweden three years ago, so there was just a one-year overlap between his arrival and the financial collapse of Brooklyn’s original creative skills space in 2013.

Kravtchouk’s plans for Craftsman Ave. seem far more ambitious. He intends to create a network of maker studios in cities around the country, starting with a much larger flagship space, perhaps in Brooklyn, perhaps in San Francisco or LA, that can accommodate a wider variety of classes. But his ultimate goal for every outpost of Craftsman Ave. is to help serious designers and makers bring their visions to life. Along with other professional tools like a table saw, metal lathe and industrial sewing machine, a 3D printer is set to arrive next week in the Gowanus studio, which will make it easier for anyone working on a Kickstarter campaings to produce the prototypes they need.

“Etsy opened a completely new world for makers. But there’s so much there—a lot of indie makers create a profile and have two sales a year…I want to create a platform that will help people bring their products to market.” Down the road he envisions assisting members with marketing, prototyping and the distribution of their products.

For now though, Kravtchouk is starting small, and using the 1500-square-foot Gowanus space as a “proof of concept.” One-day workshops, which will begin the second week of July and will cost $60-$120, will be held around a table large enough for six to eight people, and students will take home a finished product from each one, whether it’s a footstool from the woodworking class or a ring from the jewelry-making workshop. Memberships will be open to roughly 10 to 20 people, and range from $200-$550 depending on the hours and the type of workspace. The exact details are a work in progress, but Kravtchouk will be at the Renegade Craft Fair this Saturday, when he plans to relaunch his site with the full schedule and pricing. In the meantime, you can sign up for their email list to stay tuned.