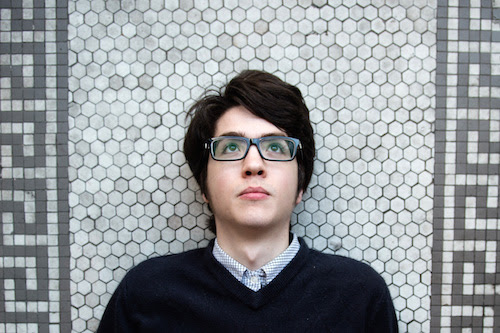 Will Toledo, a Seattle-based musician who performs as Car Seat Headrest, is incredibly prolific. Before signing on with Matador Records the 22-year-old artist recorded 11 albums on his own via Bandcamp. That’s a staggering output.

I’ll be happier when the ‘gawking’ phase of it is over–everyone trying to decide whether or not I’m worthy of interest. It’s like being a freshman.

Toledo is making a proper indie label debut with Teens of Style, an eclectic and experimental-sounding record that recalls Beck and other idiosyncratic artists, but undercut with the melodic sensibilities of one of Toledo’s major influences, the Beatles. Meanwhile, the seemingly fatalistic and moody lyrics go hand in hand with the psychedelic nature of the music and Toledo’s detached, reverb-treated vocals.

This week, Toledo and his band will be performing several CMJ showcases. Toledo spoke with Brooklyn Based about his music and why working out of his car–hence the band name–was integral to his output.

I read that the reason your project is named Car Seat Headrest is that you originally operated out of your family’s car. What made it a suitable environment to craft your music?

It was private; no one could hear me, no one was going to come and interrupt me. That’s basically all I was looking for.

How did was the transition from being a one-person project to a full band with drummer Andrew Katz and bassist Ethan Ives?

It went more smoothly than I could have hoped for. Almost as soon as I started actively looking for a drummer, I found Andrew–on Craigslist. We had a gig two weeks later with Andrew’s friend Jacob on bass, and Ethan was the first act to play that night. I started having sessions with him on guitar, and eventually he joined the band in earnest. That was right around when we got signed to Matador. When Jacob went to medical school, Ethan filled in on bass. That’s what our CMJ lineup will be–after that, I’ll have a college friend coming in from New York to join us on bass.

Is this the first time you’re touring around the country as Car Seat Headrest? And is this also your first time doing CMJ? And how excited are you to play in New York City?

We did a small East Coast tour at the beginning of this year; this will be the first large-scale tour we do. We’ve never done CMJ before, but we did play at Baby’s All Right when we toured earlier. Right now I’m nervous, because we’re playing a lot of shows and I don’t want my voice to give out. But I’m sure it will be a lot of fun.

I am amazed that you’ve already recorded 11 albums pretty much on your own.  How do you explain that productivity? You must write and record a lot.

I don’t know, everyone in my social circle was putting out art pretty regularly. The first four aren’t very good. And I was always focused on recording; I didn’t spend much time on live shows, or social campaigning. So those albums are pretty much the entirety of my creative energy over the past five years.

Much of the material for this new album came from recording from 2010-2012 and you reworked them. Was there any specific criteria in selecting the songs that would end up on your Matador release?

I chose the ones I liked, that aged well enough to be revisited. And I wanted to fit on a single vinyl, so I couldn’t pick anything too long. And of course they had to work outside of their context on the original album.

The music on Teens of Style is so eclectic and experimental, yet has such a pop sensibility, too–I hear a little Beach Boys in some of the vocal harmonies. Who would you say are your musical influences?

I think the Beatles are more primary than the Beach Boys in my influence chart. Brian Wilson’s harmonic arrangements are incredibly complex and more like classical composition; the Beatles usually did a simpler three-part harmony, which is about as far as I go myself. I also learned a lot about album sequencing from them, which is why I prefer eclectic track lists. Later on I picked up a fair amount from more traditional indie-hype bands like Neutral Milk Hotel and Radiohead.

You’ve already been mentioned in outlets like Noisey, Rolling Stone, Pitchfork and Spin—how are you taking all of this attention?

I’m glad it’s all been so positive, but I’ll be happier when the ‘gawking’ phase of it is over–everyone trying to decide whether or not I’m worthy of interest. It’s like being a freshman.

Car Seat Headrest will perform Wednesday at Pianos (CMJ), 1:45pm, and Santos House Party (CMJ), 7:30pm; Thursday at Cake Shop, noon; Friday at Rough Trade NYC (CMJ) at 7pm; Saturday at Space Ninety 8, 1pm; and on Dec. 8 at Baby’s All Right, 8pm. The band’s album, Teens of Style, will be released on Oct. 30 via Matador Records.