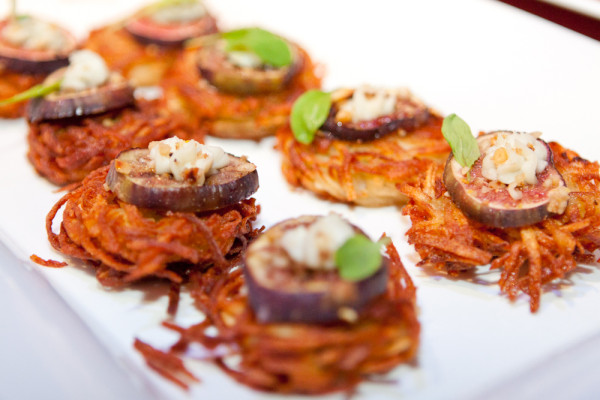 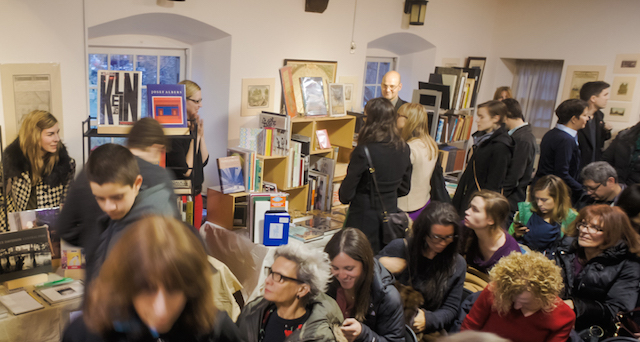 Book lovers should head to the fourth annual Brooklyn Holiday Book Fair on Saturday for rare and out-of-print reads to gift. Photo: Honey and Wax Booksellers

We’re in the home stretch, the last month of 2015, and you probably have a lot of nights blocked off already for holiday parties and get-togethers. For all the open spots on your calendar, we’ve got some good ways to fill the days ahead.

Yesterday was “Giving Tuesday,” but today the Big Brooklyn Toy Drive begins in earnest with bins spread through North Brooklyn, Dumbo and one Park Slope locale. Fill them with new, unwrapped toys for kids ages 2-13 who will truly appreciate them. Be sure to read through all the perks involved, like free East River Ferry tickets, and a food-and-booze filled party on Dec. 16, the last day to donate presents.

If you’re shopping for a bibliophile this season, the Brooklyn Holiday Book Fair, filled with rare, out-of-print, and vintage books from local booksellers, is the holiday market you’ll want to hit on Saturday. It’s at the Old Stone House in Park Slope and make sure to arrive before noon if you want Adrian Tomine to sign a copy of his new graphic novel, Killing and Dying.

One of Williamsburg’s longstanding bars, NitaNita, is closing its doors on Saturday, because their 10-year lease is up and their rent is about to triple. Their backyard and 2005-priced drinks will be sorely missed, but you can fill up on Gouda mac and cheese and pay a visit to their sweet patio one last time at their closing party.

A few blocks away on Monday night, we’ll be holding our semi-annual workshop on buying a home in Brooklyn, which has obviously become a serious investment and feat (see above). All the more reason to arm yourself with valuable information, and wash down all that sobering news with a beer, which comes with your ticket.

And tonight, if you’re up for something spontaneous, the dreamy pop band, Henry Flower, will be performing at the Manhattan Inn with a handmade light organ sculpture and a dream machine. Not quite sure what those will look like in person, but the setting is ideal. It’s one of our favorite cold weather bars, and there are a number of interesting shows scheduled this month, like a Joni Mitchell tribute with TEEN on Dec. 17, all curated by an outfit called Hypnocraft.

We’ve got more great ideas for your Ideal Week ahead (none of which require a down payment)!

DJ Sadiq, founder of the DJ collective Soul Summit that draws a massive crowd to Fort Greene Park on Sunday afternoons in summer, is bringing his soulful house music to The Bahche on Friday, part of their new Flashback After Work Fridays series which is free till 7pm, and $10 after (Sadiq goes on at 10), and apparently a new management strategy overall. Quite a few of the regulars at this enormous bar/restaurant down the block from the Bell House have been griping about the shift in focus from its food and its now defunct “playroom” to its bar offerings. All the more reason to go for the dancing, not the dining.–N.D. 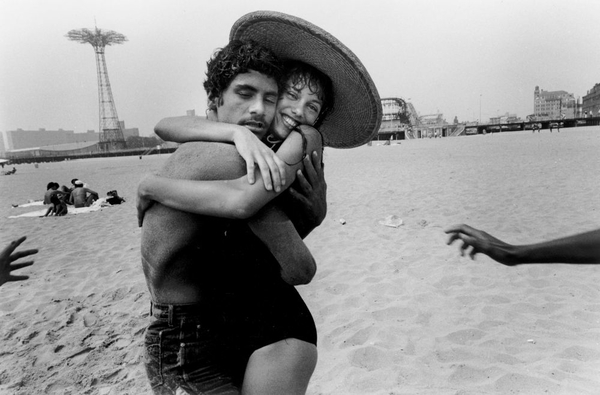 Relive your summer at Coney Saturday at the Brooklyn Museum. Image: © Harvey Stein, 2011

With the advent of winter fast approaching, summer at Coney Island is probably the last thing on every New Yorker’s mind, but why not allow your mind to wander and head to the Brooklyn Museum this weekend to celebrate the people’s playground. For the next iteration of Target First Saturday, the museum will become a miniature carnival in celebration of the recent opening of Coney Island: Visions of an American Dreamland, 1861–2008. At 6pm, attendees can choose between a tour of the new exhibit led by Robin Jaffee Frank, chief curator of the Wadsworth Atheneum Museum of Art or a screening of the 1978 film classic, The Wiz, before heading to another part of the museum to craft Coney Island rides in wire.

At 7pm, catch a performance by gypsy band Amour Obscur or sign up for the pin-up mermaid contest and catch sideshow performances at the Pop-Up Sideshow. (Those looking for a quieter time can hear photographer Harvey Stein discuss his book, Coney Island: 40 Years, 1970–2010.) And end your evening with a risqué burlesque performance featuring players from Brown Girls Burlesque, a special screening and discussion of the AIDS awareness film, Radiant Presence, or get on your dancing shoes for a live show featuring Raya Brass Band. Admission is free, but some events are ticketed, so be sure to show up around 4:30pm to secure your spot at choice events.–N.R.

‘Tis the season for holiday markets and this Sunday, there are two very good options to choose from. If you’re living in North Brooklyn, you’ll definitely want to drop by the Greenpoint Loft for the winter edition of the Greenpointers Holiday Market. The beloved local blog has once again recruited a terrific lineup of local vendors to sell their wares while patrons browse and carouse. Enjoy Hungarian mulled wine from Palinkerie; a winter lager from Greenpoint Beer & Ale; coffee from Cafe Grumpy; food from Brooklyn Whatever, Esme, Moe’s Doughs, and more; and all kinds of fun activities, including tarot card readings, nail art, a photobooth; henna tattooing; live music; free bang trims; and last but not least, customized stories from The Roving Typist (who stars in the film, above). That’s a real mouthful. Admission is free though RSVPing is encouraged, doors open at 1pm.

For those a little further south, there’s PS 29’s aptly-named Eat Pie and Shop. To support its arts and enrichment programs, the Cobble Hill school is opening its doors for a kid-friendly afternoon of, you guessed it, pie and much, much more. Not only will homemade desserts be on sale for $5/slice, but there will be two baking contests (one for grown-ups and one for kids) to catch starting at 1:30pm. The adult baking contest will be judged by local celebrities, including Nick Morgenstern, owner of Morgenstern’s Finest Ice Creams, and Pat Moncure of Pat’s Pie fame, while kid judges will choose the best pint-sized baker. There will also be a well-curated artisan gift fair to peruse, arts & crafts, a Toys for Tots collection booth, and an on-site photo studio for parents looking to get professional grade pics of the kids for just $30. Admission is free (the pie, unfortunately, is not), doors open at 11am.–N.R.

Proof that not all latkes are created equal, a spaghetti squash entry from a previous Latke Festival. Photo: Edible Brooklyn

Even if you don’t celebrate the Festival of Lights, Hanukkah brings the gift of latkes to everyone this time of year, and the best way to indulge in these deep fried potato pancakes is a night at the annual Latke Festival. It takes place in the Metropolitan Pavilion in Chelsea, but many of the participating restaurants are local, and the variations, which are all in competition for the People’s Choice Award, are endless. (The Okinawa Latke, a Japanese sweet potato and crispy chestnut latke sizzled in duck fat with miso créme fraiche and yuzu, is an example of how creative chefs get.)  Tickets start at $65 and the proceeds benefit the Sylvia Center, a non-profit that inspires healthy eating among NYC children and their families.–N.D. 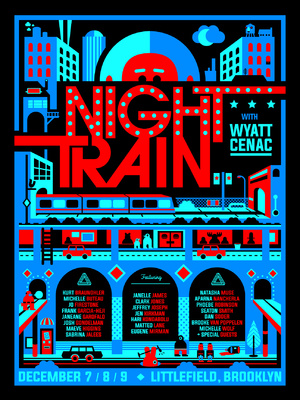 Night Train, the comedy show hosted by Wyatt Cenac and guests every Monday at Littlefield, is morphing into a television show, and they’re holding live tapings through Wednesday. Most have already sold out, but before the sole show with $5 tickets still available as of publication–Tuesday at 10pm–followed suit, we snagged a pair of tickets for a lucky reader to use. You’ll see Brooke Van Poppelen, Janelle James, Dan Soder and Damien Lemon, and get a free silkscreened poster for you and your guest. Just like this post on Facebook to enter, we’ll notify you by Monday, Dec. 7 at noon.–N.D.

Feeling haunted by the holidays? Maybe a good laugh will help. Next Wednesday, head to the Bell House for a very (very!) special holiday edition of Haunting Renditions, everyone’s favorite, local variety show. Watch (perhaps in horror) as host Eliot Glazer, a professional singer turned comedian, performs ballad-inspired covers of well-known pop songs with the help of sister and all-around funny woman Ilana Glazer (Broad City) and writer and stand-up comic, Naomi Ekperigin (Broad City, Difficult People). Tickets are only $10 and sure to sell out, so get yours before they’re all gone. Doors open at 8pm.–N.R.

Tips this week by Nikita Richardson and Nicole Davis