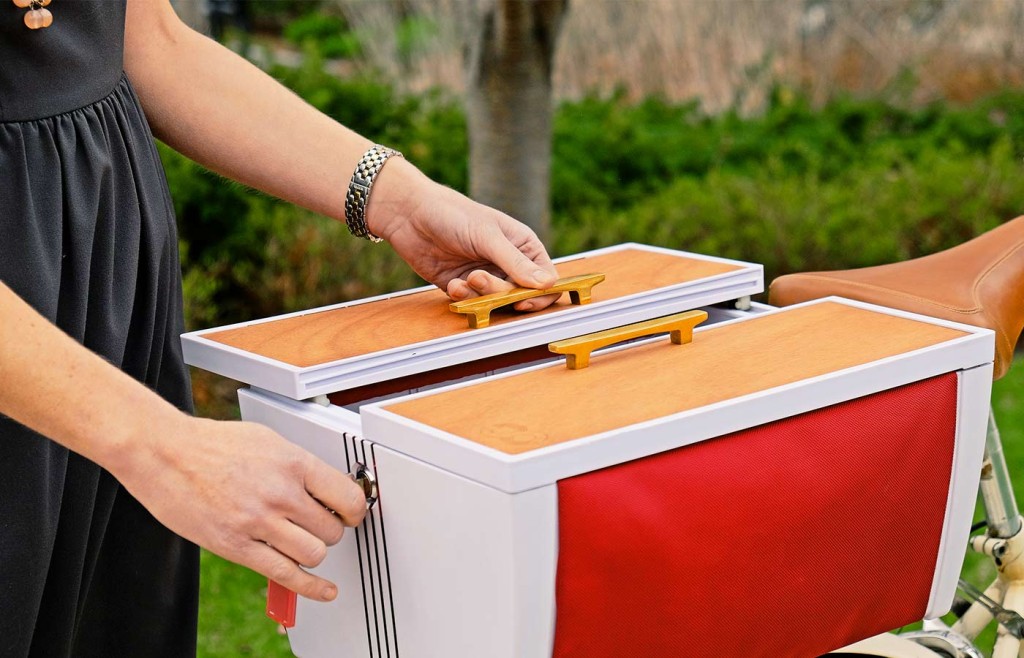 The Buca Boot has got to be one of the coolest way to haul a picnic to the beach. Photo: Buca Boot

Pedal pushers are out in force now that spring has finally taken hold. If you’re new to cycling in the city check out our guide to getting on a bike, and even if a full-on bike commuting lifestyle isn’t for you (the sweat factor in the summer is real), it can be a real pleasure to ride around New York City for fun.

We asked local bike advocates for their favorite rides, and added in some of our personal picks as well. Strap that helmet on and give these rides a try. 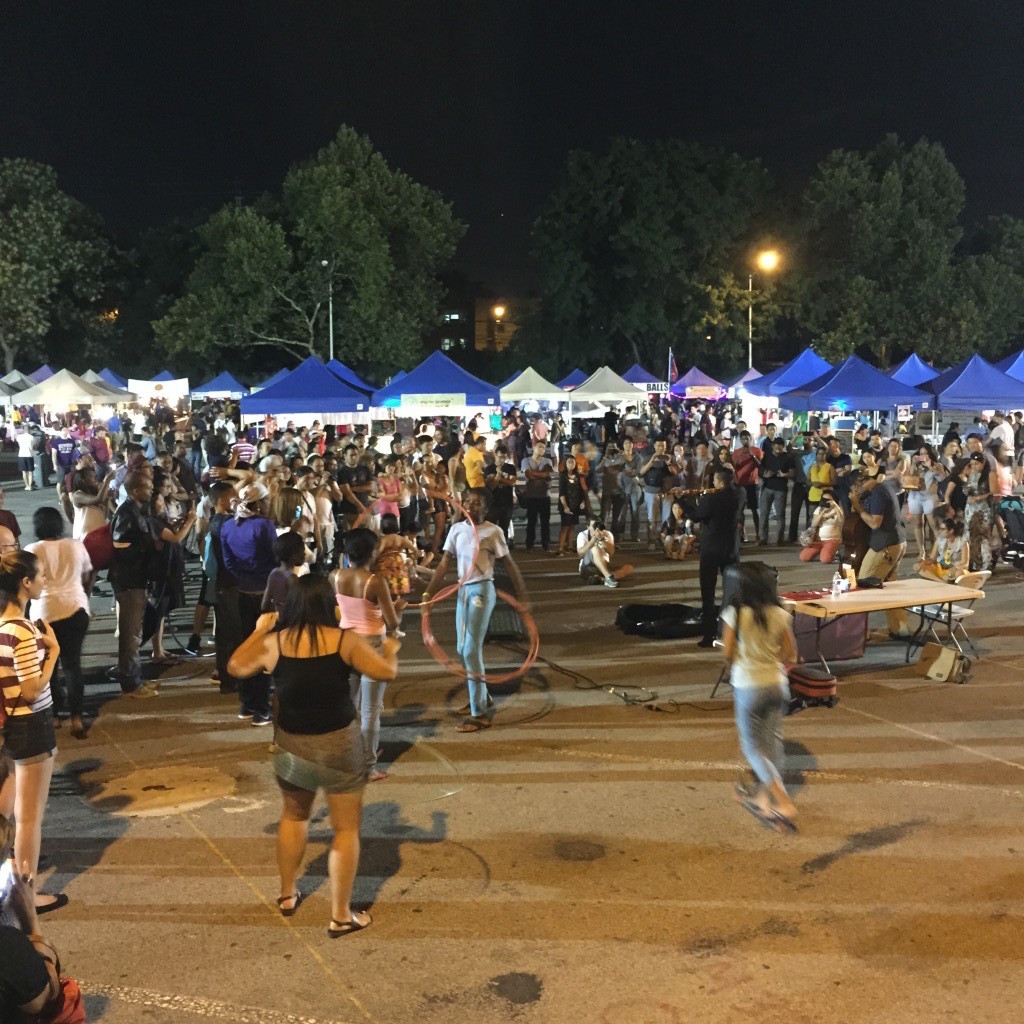 The Queens International Night Market is at Flushing Meadows every Saturday this summer. Photo:

New to cycling? Check out MapMyRide’s 50 Golden Rules to Bicycling.

Looking for a better tool than Google Maps? Check out the Hammerhead Bike Navigation System. This sleek product attaches to your handlebars, and syncs to your map to show you the way with a simple LED guide.

Want to do something totally different? Update your vinyl collection while getting your bike on using Bikabout’s nifty Vinyl Bucket List by Bike ride around Brooklyn and Manhattan.

Already know the best routes around? Become an Ambassador and map your cycling smarts.

Flushing Meadows Corona Park Make your way over to Flushing Meadows Corona Park (Brooklyn Bicycle Co. says it’s about eight miles or 45 minutes to ride from North Brooklyn), which has everything you could want in one location: a zoo, boat rentals, pitch and putt, tennis, a Ramones exhibit at the Queens Museum, and of course those space ships left over from the World’s Fair/Men in Black. Now through August, the park also hosts the Queens International Night Market every Saturday night. Much like Smorgasburg, the nightmarket has lots of different tasty stalls to choose from, but it hews closer to the tradition of the Asian food markets that inspired it and offers more authentic fare and fewer bacon-ramen-burger mash-ups.

Prospect Park While I find that there are some intense speed racers on the Prospect Park bike path, don’t let that stop you from cruising around the 3.35 mi loop. With its dedicated bike lane, and car-free weekends, it is the perfect place to pedal at your own pace and explore the beautiful spot. On Sundays from 11am – 6pm from now until October 23, Smorgasburg is in the park near the Breeze Hill area. After grubbing, you can also hop out to the Botanical Gardens, the Brooklyn Museum or the Prospect Park Zoo to see those mini foxes.

Jacob Riis Park A bike trip to Jacob Riss Park may sound pretty intense (Brooklyn Bike Co. clocks the route at 16-miles and nearly two hours from North Brooklyn), but the ride to Rockaways is totally worth it. What used to be a sleepy, locals-only beach getaway is now a summer hot spot. The awesome Brooklyn Night Bazaar (which has been reincarnated as the Riis Park Beach Bazaar after losing its space to BMW in Greenpoint), includes an Ample Hills Creamery outpost, craft beer, and indie concerts. If you want to picnic like a boss once you get there, haul your provisions in a Buca Boot, an awesome bike storage solution. If you don’t want to take on this voyage alone, hitch onto the Epic Ride, sponsored by Brooklyn Greenway, and ride along Greenpoint’s waterfront all the way to the Rockaways on July 23, 2016. You could even spend the night on a boat.

Bridge Views: Williamsburg Bridge Whether you BYOB(ike) or grab a Citi Bike, you can easily get in a ride across the bridge and back. Tourists may press the Brooklyn Bridge ride, but I find it way too crowded with pedestrians for my pleasure. The Williamsburg Bridge has pedestrians too, but they have their own side of the bridge (that they mostly stick to), and the bike lanes are pretty well maintained (give or take a pothole or 10 you may have to navigate around). Even with the holes, this bridge has a smoother path, and a pretty steep climb on both sides–much to my chagrin on those early morning commutes before coffee. There is a Citi Bike Station on the Brooklyn side of the bridge for your convenience, as well as two Landmark Bicycle shops close to the bridge in Williamsburg and in East Village, in case you want to rent or buy a bike, you catch a flat or just need some air.

Now that you’ve made it to Williamsburg, enjoy a lovely five-mile ride from Bikabout.com, a website dedicated to inspiring two-wheeled tourism in great biking cities. Both Williamsburg and Greenpoint are pretty cyclist-friendly, including bike lanes on many one-way streets to help you get around, and stay safe. Need a break? McCarren Park is a fantastic place to chill and catch some rays. Check out the map below: 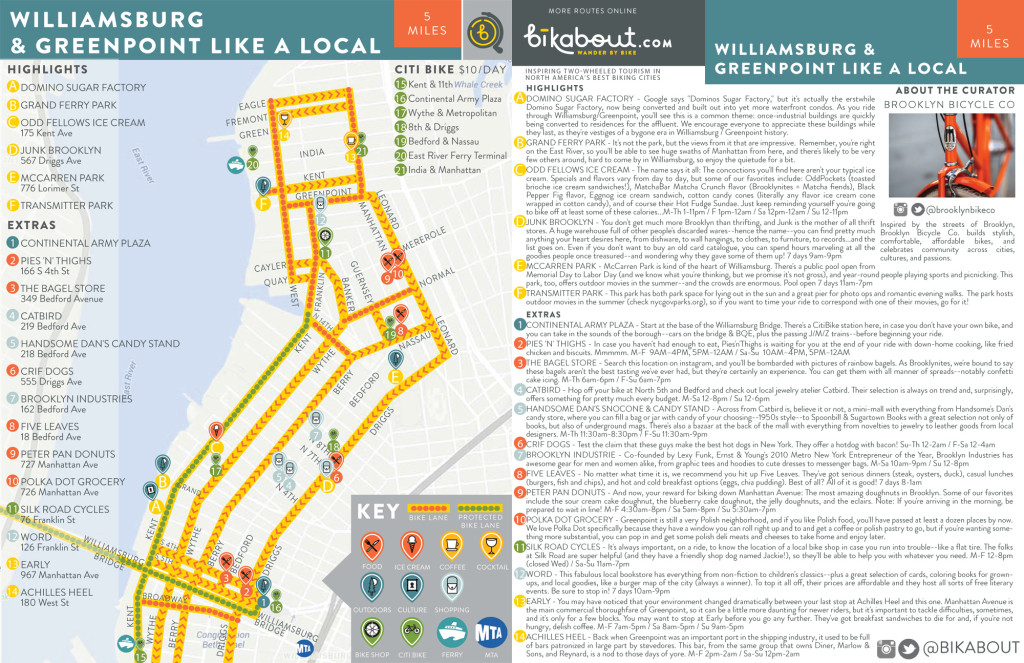 Bridge Views: Brooklyn Bridge If you must take the road most traveled and pedal over the Brooklyn Bridge, you can get there easily. My favorite route approaching from North Brooklyn is via Kent Avenue from Williamsburg to DUMBO. I won’t lie to you, Kent is pretty crowded too, most any time of the day, but the scenic view is worth the pedestrian dodge, and once you get to DUMBO, you can take a break and enjoy the old city vibe down there under the bridge. On the way, you’ll pass through the now-booming Navy Yards, and could even grab a tour and whiskey tasting at the Kings County Distillery, if you time it right. Again, the route is super bike friendly, and has two-direction bike lanes. Brooklyn Bridge Park has some killer (cheap and free) activities happening this summer, so hang out for a minute, or several, before heading over the bridge to dodge (even more) pedestrians and tourists who gotta #getthatselfie.

Governor’s Island The folks at Brooklyn Bicycle Co. suggest taking the Governor’s Island Ferry, when it resumes service May 23, from Pier 6 in Brooklyn Bridge Park to head to Governor’s Island for a car-free ride with far less mileage. You can even rent bikes there if you absolutely want to ease yourself into riding in a super safe environment. There are plenty of delicious treats from various food vendors, plus art installations, abandoned military buildings, and a hammock garden, which is exactly as wonderful as it sounds. In addition, a 2.2 mi promenade will open this summer that will make it possible to bike all the way around the island, with a view of Lady Liberty. Another brand-new section slated to open this summer, The Hills, will make a perfect pitstop.