Summer in New York is all about smells. Linden trees and burgers on the grill, yes, but also urine, the boiling ketchup scent of hot garbage, and all those sweaty armpits in your face on the train. Lately, in the interest of eliminating potentially toxic chemicals from our grooming routines, we’ve been obsessively testing natural deodorants, but as anyone who has ever purchased a stick of Tom’s of Maine knows, a lot of them really don’t work. At all.

So, at great olfactory risk to our fellow straphangers, yoga practitioners and loved ones, we tried out and quizzed friends about nearly a dozen deodorants. These are the best among them. And, because natural is basically a marketing term, we’ve included the Environmental Working Group cosmetics database rating for each one, which ranks thousands and thousands of products on their toxicity levels from zero (totally non-toxic) to 10 (buyer beware). Most commercial brands like Dove or Secret fall somewhere between a three and a five on the scale. 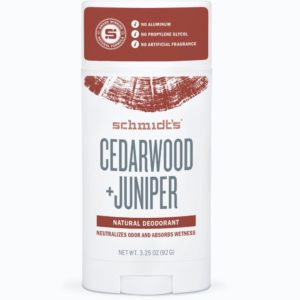 Schmidt’s, $9 per stick
Simply put, this stuff is the answer to natural deodorant prayers. It’s not in the EWG’s database, but it’s made from stuff you’re likely to find in your kitchen or at a natural foods store–arrowroot powder, baking soda, shea butter and coconut oil, and I’m here to tell you, as a relatively sweaty person, it really, really works. It comes in stick or jar form–I’m not a fan of smearing paste on my armpits, so I use the stick. The cedarwood and juniper scent is a woodsy, hippie-lite scent that is totally unisex, and there are a bunch of other light scents like rose vanilla, coconut pineapple and lavender. There’s an unscented, too.
Strength: High, this is summer subway approved.
EWG Rating: Not in the database, but all the ingredients are fully recognizable, though if you are sensitive to baking soda, this may not be for you.
Pros: Works great, smells great.
Cons: It’s not as slippery going on as mainstream deodorants, so it’s best to apply right out of the shower when your skin is warm and damp. 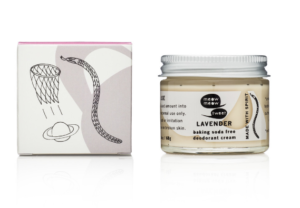 , $14-20
The adorably-named Meow Meow Tweet is a natural beauty company that makes small-batch, vegan, organic soaps, lotions, oils, deodorant and more in Brooklyn. Everything they sell smells amazing, is made from the highest quality ingredients and really works. If I were a slightly less sweaty version of myself, this is the deodorant I would wear all the time, and I do buy it for the cooler months. They make a baking soda-free version, for anyone whose pits are just not happy with that ingredient.
Strength: Medium-strong
EWG Rating: Not rated, but made from arrowroot powder, coconut oil and essential oils like jojoba and lavender.
Pros: Made locally, smells great, effective and used ethically-sourced ingredients.
Cons: Get the jar, not the stick. The packaging for the stick is cute, but the cardboard container the deodorant sits in does not stand up to use and you will end up scooping it out and using it like a cream anyway. 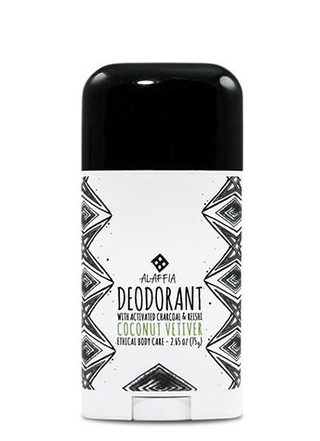 , $6
I like a lot of the products by this natural beauty brand, but their deodorant was not a winner. The ingredients list is a lot longer than Schmidt’s and Meow Meow Tweet, and where those formulas are quite sticky, this one is too slick. I was embarrassed by the end of an hour-long spin class when I gave this a test run. If you hate that tacky, effective texture of Schmidt’s though, this might be for you, and Alaffia funds empowerment projects in Africa with a portion of their profits and their ingredients are fair trade, so it’s a brand you can feel good about.
Strength: Low to medium
EWG Rating: Not in the database, but free from propanediol, parabens, phthalates, aluminum, propylene glycol, mineral oil, sulfates, triclosan, silicone and synthetic fragrance
Pros: Glides on easily
Cons: Not super strong, very slick texture, scents are pretty hippierific 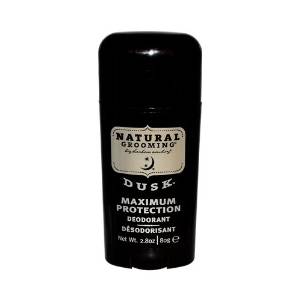 Herban Cowboy, $6-8 per stick
Herban Cowboy works very well, does not smell at all like a hippie, despite having scent names like Dusk and Forest, and lasts all day. It’s a stick that goes on smoothly–and the dusk scent smelled and felt like a slightly crunchier version of regular deodorant. Definitely a good choice if you’re looking to win over a natural deodorant non-believer.
Strength: High
EWG rating: 3-5, depending on scent
Pros: Comes in unscented, which is hard to find in a natural deodorant, and there are a lot of dude-friendly scents in their collection.
Cons: If you’re absolutely trying to eliminate all chemicals you should know that Herban Cowboy uses propanediol, a naturally-derived replacement for propylene glycol. The EWG gives the former a one and the latter a three. 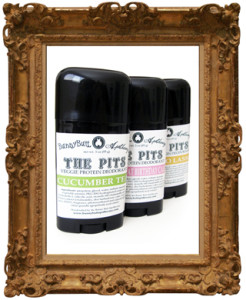 The Pitts, Bunny Butt Apothecary, $12
BB pal Lee Ann Westover turned me on to Bunny Butt and it is one of the best natural deodorants I’ve used. As she put it, “It’s not eau de hippie, you’re not slathering weirdness on your armpits and it really works.” Westover says that she tends to be fairly sweaty, which I relate to, and we both find that Bunny Butt gets us through the day fresh as daisies. There are tons of scents available (too many, really), and so far Sucre Bleu and Hunnysuckle have been the clear winners.
Strength: High
EWG rating: Not listed, contains no aluminum, parabens or phthalates; contains propylene glycol, an ingredient that gets a three rating.
Pros: Tons of scents, really works, many of the scents come as a perfume or lotion, too, for layering.
Cons: Not cheap, and not available locally so you have to order online. The scent options can be overwhelming (Pirate’s Booty, described as “The woodsy aroma of a ship’s deck, Turkish coffee, cocoa, and spices plundered from a merchant ship, creamy vanilla and intoxicating musk, and, of course, a splash of honey rum. Think, sexy pirate” actually smells like a cupcake.) 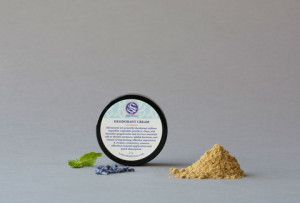 Soapwalla Deodorant Cream, $14
This stuff, which is made from seriously all-natural, food-grade ingredients right here in Brooklyn, has inspired a serious following. When I polled natural deodorant users for their favorites, about half cited Soapwalla as the be-all, end-all deodorant for them. It smells fresh and great and the smooth cream is non-irritating, but this formula just didn’t work for me. In the winter, fine, but in the summer, when I got out of the shower and smoothed it into my pits I just felt like they never dried and I was vaguely sticky all day long, but I’m definitely on the sweaty side. Plus, and this is sheerly personal preference, I hated having to wash my hands again after applying.
Strength: Moderate
EWG rating: 0
Pros: Super high quality, seriously non-toxic, made by a Brooklyn small business, smells amazing.
Cons: Not for the sticky summer months or if you’re particularly sweaty or if you just don’t love cream deodorants, and it’s not cheap.

EO Organic Deodorant, $4-6
I bought this on a whim while standing in line at the fancy organic bodega in my neighborhood. It’s basically water, alcohol and lavender oil, so it’s about as basic as it gets. Surprisingly though, it kept me smelling totally acceptable through an entire spin class, but it’s definitely a re-apply several times throughout the day type situation. Ultimately, you’d be better off rubbing lavender oil on your pits, but if you don’t sweat very much, this could really work. I’ve repurposed it as a salt water, beach spray for my hair, and it’s great at that.
Strength: Low
EWG rating: 1
Pros: Recognizable materials, smells great, at least the lavender formula, spray dries quickly.
Cons: Not very strong, have to re-apply throughout the day, stings if you apply right after shaving.

Earth Science Natural Deodorant, $6-8
In the sea of natural deodorants you might pass Earth Science by–its packaging is pretty middle of the road and it just doesn’t stand out. But it works, especially in the less sticky months. The rosemary mint scent is bright and fresh and clean, but not perfume-y.
Strength: Moderate
EWG rating: 1
Pros: Clean, light, non-sticky formula, inexpensive.
Cons: Not quite strong enough for a summer subway ride.