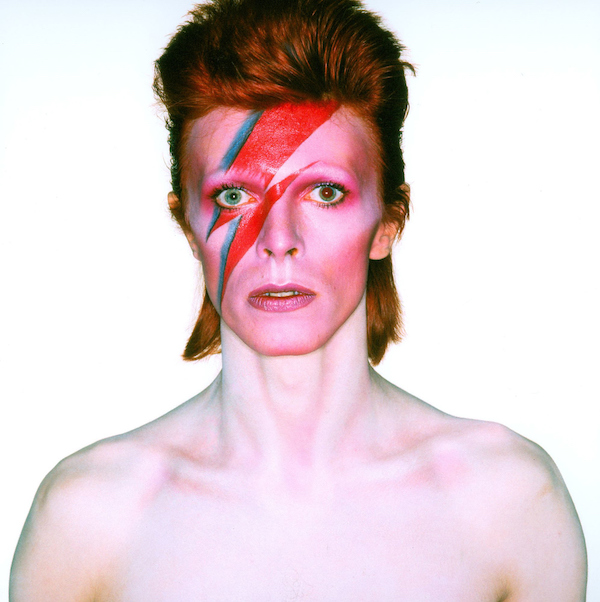 “Sound and Vision” is the title of a song by the late David Bowie from his 1977 album Low, and those three words perfectly sum up the essence of and contributions by the man. In a career that spanned six decades, Bowie left an indelible and lasting imprint in the worlds of music, film, art, fashion and video. His death in 2016 at the age of 69 still leaves a tremendous void in the hearts of fans who saw him as a trendsetter; a phrase most often used in the wake of his passing was that he gave people permission to be themselves. His genius was his ability to borrow from disparate influences—whether The Velvet Underground, traditional Japanese wardrobe, or mime artist Lindsay Kemp–and turn them into something so striking and brilliant that over time became his own original idea.

Prior to his death, Bowie’s astonishing life and body of work were the focus of an art retrospective David Bowie Is, which was first shown at London’s Victoria and Albert Museum in 2013. Since then, this exhibit has traveled the world and has been seen by nearly two million people. Now David Bowie Is is making its final destination at the Brooklyn Museum starting this Friday, which is quite fitting in that New York City was his adopted hometown until the very end of his life. This vast and stunning exhibit features about 500 objects associated with the musician—including photographs, costumes, album artwork, handwritten lyric sheets, video clips, vinyl records, and drawings and art by Bowie himself.

When you first walk into the gallery, the first thing you see is Bowie’s last name shown in movie star-like typography with the Tokyo Pop bodysuit he wore from the Aladdin Sane period underneath—an early indication that this show is going to be quite special. David Bowie Is traces the path of what led to the artist’s iconic status starting with his formative years as David Jones during the height of Swinging London in the 1960s. Some of his early 45 singles from this era such as “Liza Jane” and “Can’t Help Thinking of Me” are represented in the show along with other ephemera, including one in which he was billed underneath Tyrannosaurus Rex (later known as T.Rex) and Roy Harper. The breakthrough for Bowie was the 1969 single “Space Oddity,” released in the same year of the Apollo 11 moon landing, a period highlighted in the show through artifacts such as a video clip of Bowie performing the now-legendary track and the cover of his self-titled 1969 album. 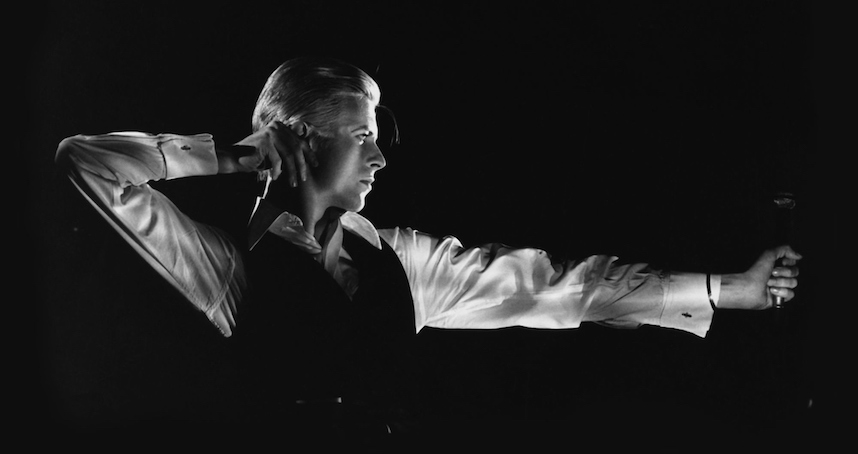 The exhibit gets into the heart of Bowie as superstar through his red-booted and red-haired guise of Ziggy Stardust that epitomized ’70s British glam rock era—represented with a clip of his famous performance of “Starman” on BBC’s Top of the Pops and his Japanese-influenced fashion attire designed by Kansai Yamamoto for the Aladdin Sane tour. The worlds of fashion and music pretty much evolved and collided with each other for the rest of Bowie’s career. Among the show’s highlights is the cabaret costume he wore on Saturday Night Live in 1979 performing “The Man Who Sold the World”; the Pierrot costume from the iconic “Ashes to Ashes” video from 1980; the ice-blue suit featured in the Mick Rock-directed promo video for “Life on Mars?”; and the Union Jack outfit that graced the cover of 1997’s Earthling.

In addition to the music and clothes, other objects from David Bowie Is include handwritten lyrics to several of his most songs, including “Rock and Roll Suicide,” “Lady Stardust,” and “Heroes.” The show even goes so far as to include a shelf of books from Bowie’s collection and a banjo that was featured on the cover of his 1982 EP Baal. Among the drawings featured in this exhibit are sketches from The 1980 Floor Show, a TV special performed in 1973, and storyboards for a film during the Diamond Dogs era. They demonstrate how much Bowie was a planner behind the scenes in envisioning how his music was going to be presented to the public in an eye-catching way. 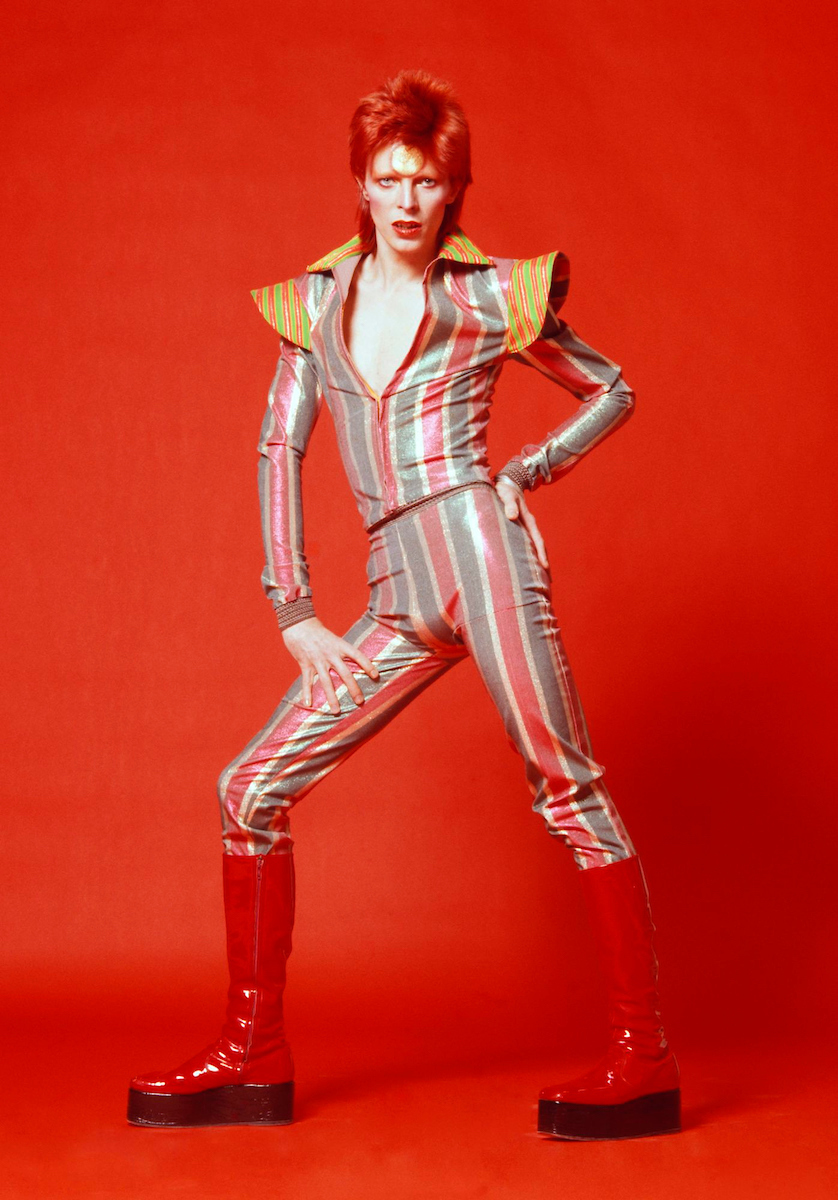 A personal highlight for me was a section of the exhibit devoted to the Black and White/Berlin Trilogy era when Bowie recorded such groundbreaking albums in the mid to late ’70s as Station to Station, Low, “Heroes,” and Lodger. Not only is this key era in Bowie’s career represented by those albums’ cover art but also the attire from the Thin White Duke and Stage tours. Poignantly, the exhibit concludes with a section devoted to Blackstar, Bowie’s final studio album, with artifacts such as a book featured in the “Blackstar” video as well as lyrics sheets.

Of special note to New York Bowie fans: there are about 100 objects added for this particular Brooklyn show, including a film backdrop to the Sound+Vision tour; materials focused on his life and work in America, including clips of him performing on Broadway’s The Elephant Man and Saturday Night Live. Also exclusive to the Brooklyn show are vinyl releases available for sale: the “Time” single from the Aladdin Sane album pressed in silver vinyl; an 8-track release titled Live in Berlin from 1978; and iSelect, a collection of Bowie tracks personally chosen by the musician himself.

Anyone who is a fan of Bowie knows that the artist never did anything in half measures—that it was going to be a grand all-or-nothing proposition. The same can be said of David Bowie Is, as there is a lot to absorb from this spectacular musical and visual feast of his life and work. In his lifetime, Bowie was essentially the living embodiment of art, so it feels appropriate that his show would take place in a building devoted to other great artworks. It’s another reminder of how bold and inspiring Bowie was and still is when it came to the pursuit of his artistic muse. He once sang, “New York’s in love/With the way she talks/And the way she walks.” The New Yorkers who see this show will be just as enamored with Bowie’s journey.

David Bowie Is opens this Friday through July 15 at the Brooklyn Museum, 200 Eastern Parkway, Brooklyn. Brooklyn Museum Members receive free, priority-access tickets while the cheapest tickets, Standard Tickets, start at $20 on weekdays in advance, and are timed every 15 minutes. There are still tickets left for opening night on Friday, March 2.