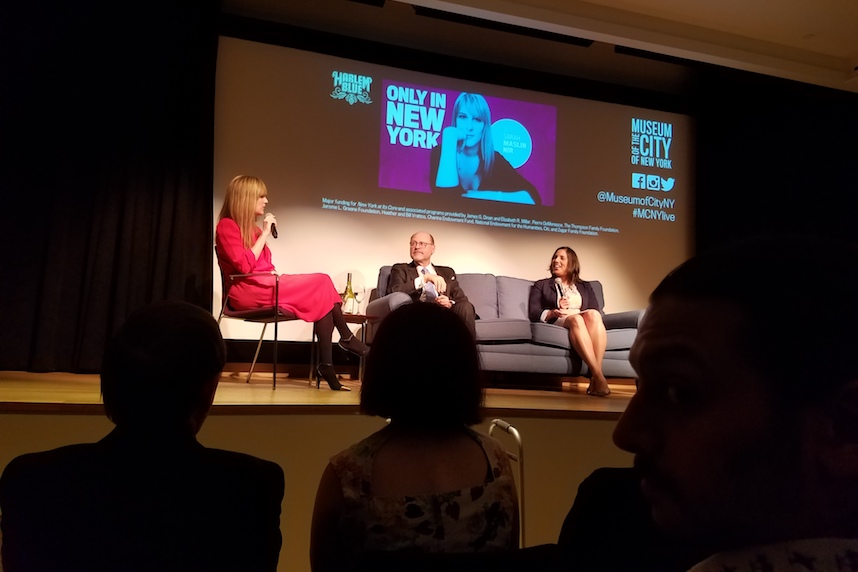 New York Times journalist Sarah Maslin Nir tried to moderate a talk about the state of the subway with MTA chairman Joe Lhota last week, but protestors from The People’s MTA drowned out the conversation. Photo: Angely Mercado

A discussion called “The Subway,” part of a series called Only In New York,  was supposed to be a casual conversation about the city’s public transit system at the Museum of the City of New York last Thursday, April 26. Instead it turned into a protest.

New York Times journalist Sarah Maslin Nir and host of the series walked onto the stage with a bottle of wine and greeted the crowd. She highlighted that the event was more of a comfortable conversation, where listeners would learn something new about the subway system. She also explained that it wasn’t going to be a Q&A where she nails the speakers to a wall.

“This is New Yorkers sitting down to discuss a city that we all love,” she said.

Maslin Nir then announced that there were protesters in the crowd attending as well and said she was excited to have them there. She referenced her own reporting on the subway and how she would be discussing transportation for disabled New Yorkers alongside other topics.

“A  big round of applause for protesters who are here because they believe that the city should be more equitable for people with disabilities,” Maslin Nir said.

Maslin Nir then introduced Chairman of the MTA Joseph Lhota and MTA Board Member Veronica Vanterpool. They each took their wine glasses and sat on a couch. 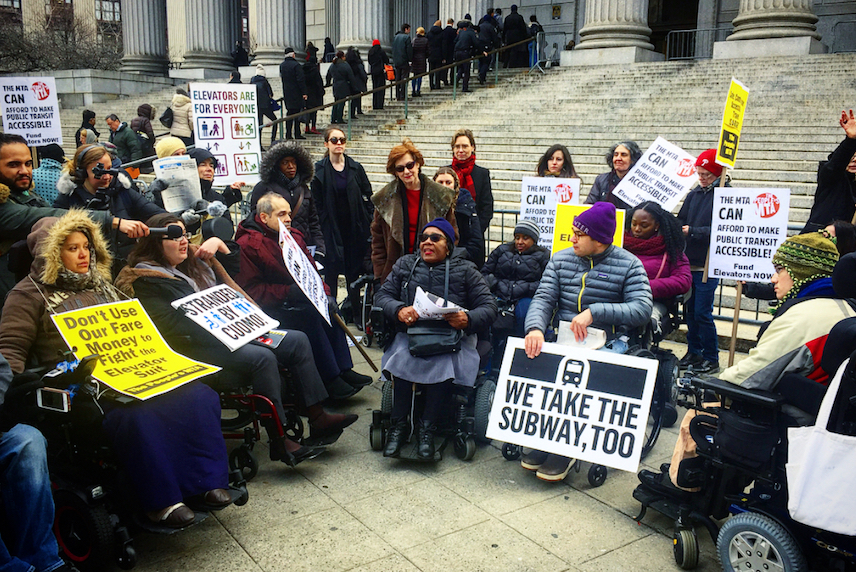 Just a few minutes later, the protesters unrolled a large banner that read “Our Subways Need Elevators, Not Racist Broken Windows Policing. The People’s MTA.” Others in the seated crowd lifted signs that read “Stop the Delays” and “Stop Racist Harassment of Black & Brown Riders.”

They chanted for several minutes about how only 23% of the city’s subway stations are accessible to people with disabilities and how poor New Yorkers often can’t afford public transportation.

Protesters from The People’s MTA chanting at a discussion about the subway at The Museum of the City of New York. Footage from Angely Mercado

Maslin Nir let some of the protesters speak for a few minutes and then went back to the stage to continue the panel. The protesters continued to chant over Maslin Nir’s questions to Vanterpool. They both tried to calm the crowd down. Vanterpool tried to speak to them and was drowned out by more chanting. The transportation advocates wanted a Q&A and demanded to speak.

After some negotiating, Maslin Nir eventually canceled the talk after trying to resume the event several times and promised everyone in the crowd a refund. Attendees who were there for the discussion began arguing with the protesters for interrupting the event.

One attendee told a protester who sat near him that it wasn’t fair that they were disrupting the event. He told her that he had taken the subway for over 50 years and paid money to hear the discussion. She shot back that she had been taking the subway for 40 years.

The protester, Sara Flounders, has become increasingly involved in The People’s MTA for over a year. She decided to come to come and protest since she was upset at how difficult it was for her and others she knew to navigate the subway system without functioning elevators. She was especially upset that they couldn’t question Lhota on access to public transportation and fare hikes.

“If we had just sat here and listened politely then he [Lhota] only gets off his message, ‘Oh I’m so concerned’ and we’re saying no, we’re going to fight for this,” said Flounders. “First and foremost they should listen to the riders, they have to.”

As people began filing out of the auditorium and protesters began to converge outside, Maslin Nir said that she wouldn’t be rescheduling this particular portion of the series. The rest of the on-stage discussions would go ahead as scheduled. She said had actually reached out to some transit advocates and asked them what topics they wanted to bring up.

“It’s really a shame, that the polarization wouldn’t let people have a dialogue and let others be heard and that was very disappointing,” said Maslin Nir. “The subway is tremendously failing its riders of every stripe and we need to have a dialogue and it’s sad that we did not.”