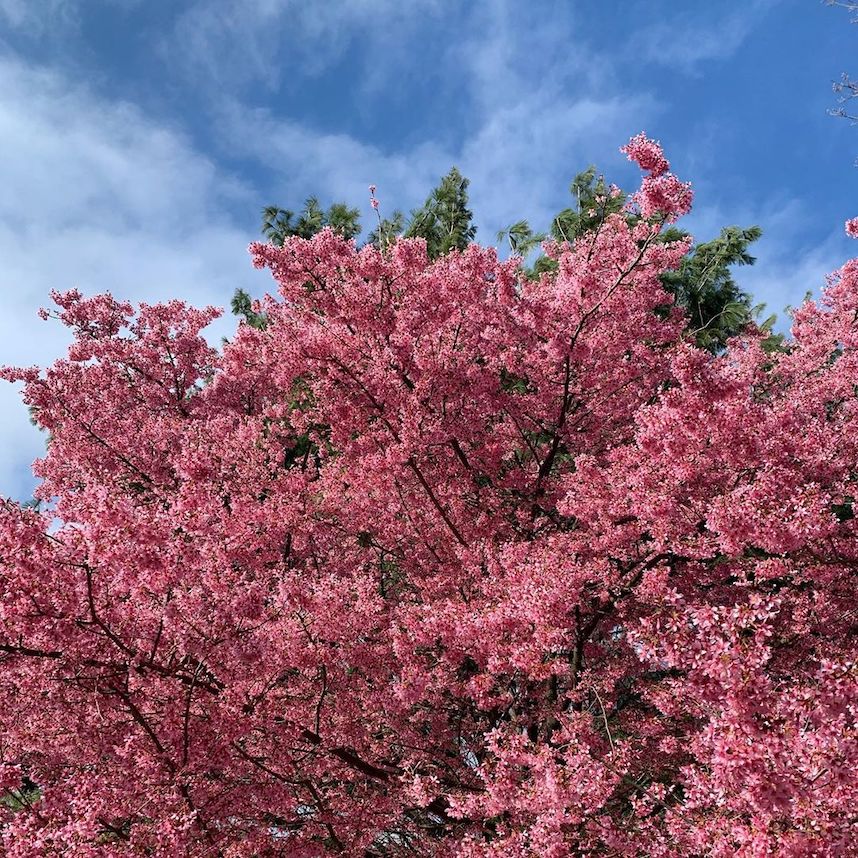 Given the choice between a walking tour and a guidebook—and I admit, I rarely put myself in the position to choose between these two options—I will always opt for the guidebook that lets me wander around solo. Within the past year, two have come out that I’ve been meaning to field test: the second edition of Adrienne Onofri’s Walking Brooklyn, featuring 30 walks in Brooklyn neighborhoods and parks, and Secret Brooklyn, a compendium of unusual sites, landmarks and characters, written by the founders of Untapped Cities.

I took them both to Prospect Park. It’s a beautiful time of year to be outside among the blossoming cherry trees, even in the midst of a quasi quarantine, and truth be told, I haven’t actually hung out much in Prospect Park. Most of my visits have been limited to the time it takes to walk to the bandshell, or to spread out a blanket in Long Meadow. I hadn’t even visited the new(ish) LeFrak Center, much less the very old Boathouse, before my walk through the woods. 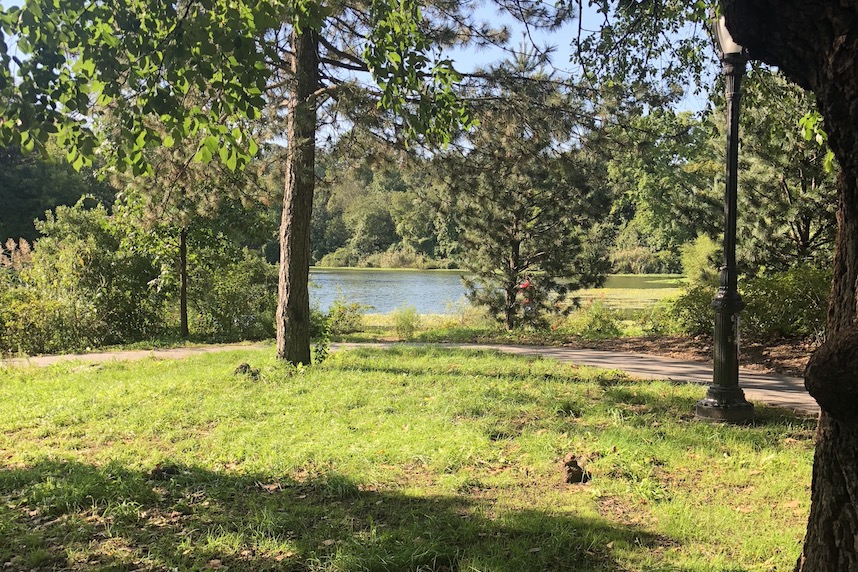 This was a chance to correct years of neglect on my part, and take a best-hits tour of this 526-acre park. It would also be the perfect place to hide the fact that I would be walking around like a tourist, stopping every few feet to study my guidebook.

My first realization, at the start of Adrienne Onofri’s four and a half mile jaunt through the park that Frederick Law Olmstead and Calvert Vaux considered their true masterpiece, was the sheer number of times I have passed Grand Army Plaza without looking up, or wondering why it is, in fact, called Grand Army Plaza. As I gleaned from Onofri, the arch is a tribute to the Union soldiers and sailors of the Civil War. A statue of Abraham Lincoln holding the Emancipation Proclamation was once part of the monument, but was later relocated inside the park.

Onofri’s walk progresses into Long Meadow, and because this was a weekday, it was nearly empty. A few people were scattered on blankets, lost in a book or conversation. Alone in the field, I was joined by memories. At one of the park’s many picnic areas, I celebrated two birthdays over beer can chicken and charades. (Remember beer can chicken?) Together with my husband, we took our now 11-year-old dog to play here during off-leash hours, when it turns into a field of furry creatures. And somewhere, on one of these hills, I met a friend’s first baby.

The Japanese swear by the stress-relieving benefits of forest bathing, which is just a new way of saying that spending time outdoors feels rejuvenating. “This was all part of Olmstead and Vaux’s vision of the park,” Onofri writes, “as a place where people are distanced from urban sights and sounds.” But there is something equally transporting about being in a space within the city that feels stuck in time, like a knob of amber that cannot be penetrated by the constant change outside of it. 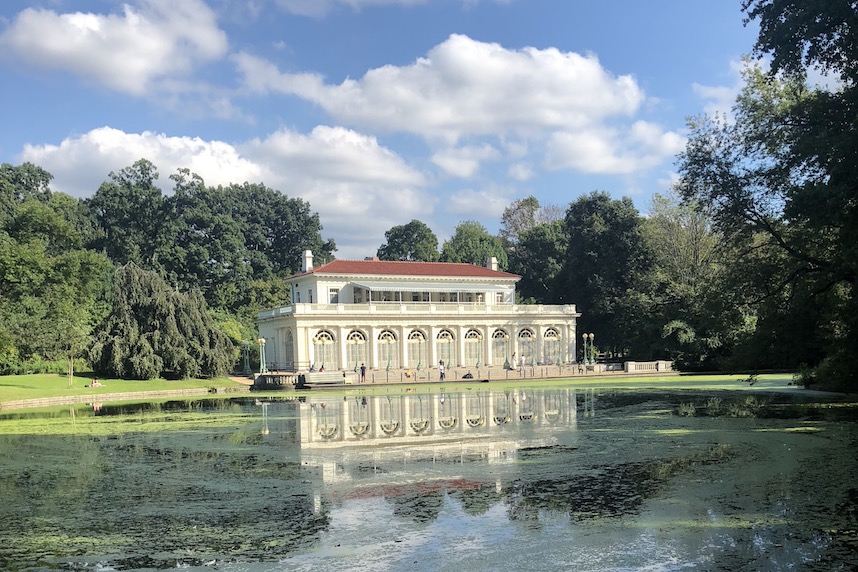 The Boathouse was modeled after the Sansoviniana library in St. Mark’s Square in Venice, a fact gleaned from Adrienne Onofri’s ‘Walking Brooklyn.’ Photo: Nicole Davis

Following Onofri’s lead, I found myself in places I’ve really only seen online, or on the park’s Instagram feed. I saw the Boathouse in all its splendor, and finally spotted the roughly 150-year-old Camperdown Elm, an exceedingly rare tree that we’ve written about, but which I’d never seen up close. I went through more arches than I knew existed, including one where a saxophonist was performing as if on cue in some Woody Allen film. 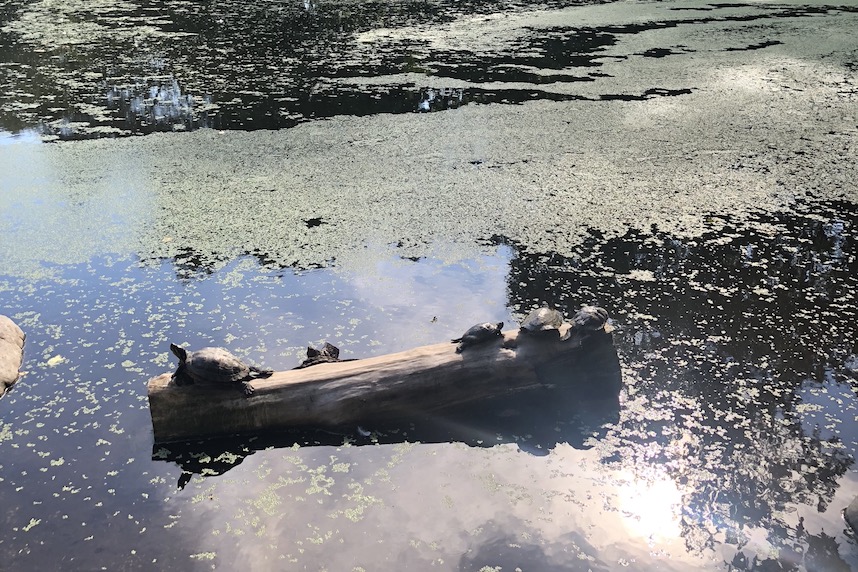 Turtles sunning themselves on a log in Lullwater. Photo: Nicole Davis

Onofri’s tour took in more statues and commemorative plaques than I cared to consider. But because of her tips, I was also guided to places I would have never known to look, like the center of the Oriental Pavillion, where you can spot the stained glass design hiding in its roof. Upon reaching the lake, glinting in the sun, I couldn’t believe I was in the middle of Brooklyn. Like a kid experiencing her first Halloween—You mean all I have to do is hold out a bag, and people just give me candy?!—I was struck by how many architectural and natural treats one could gorge on inside the park, all year round.

A few times, I got a little lost, or unsure of whether I was headed in the right direction. But it was hard to get too frustrated, considering the payoffs at each turn, like an in, out and around trip through the Ravine, which passes the serene Ambergill Falls. (You mean there are waterfalls in Brooklyn?!) 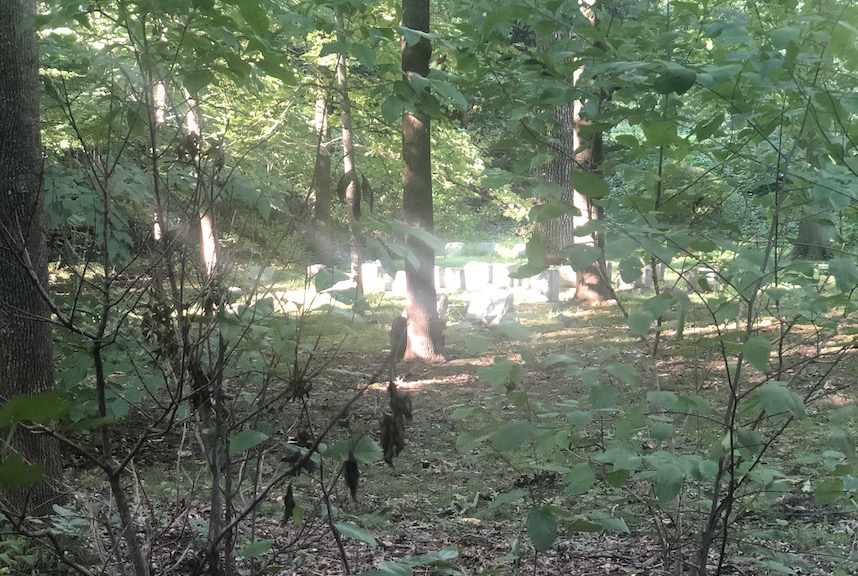 You can spot this Quaker cemetery, off limits to the public aside from a few times a year, through a gate near Prospect Park’s Center Drive. Photo: Nicole Davis

Another fascinating sight was the Quaker Cemetery, established in 1849, 24 years before Prospect Park. It is gated off and open only to Quakers and the relatives of Quakers buried there, like Montgomery Clift (which this history of Prospect Park also reveals). Provided you are still a card-carrying member of this faith, you can be buried here.

This fun fact came from Secret Brooklyn, which is like the bonus, B-side material to Onofri’s straightforward walks. It’s filled with all the weird and forgotten sites in Brooklyn like the Atlantic Avenue tunnel, or the catacombs of Green-Wood Cemetery, that you may have heard about but have likely never seen in person.

Using both books in tandem, there are so many possible backdoors and rabbit holes you could wander through. For instance, you could pair Onofri’s walk through Green-Wood Cemetery with a trip to the catacombs, open only on special occasions. (The next opportunity is an opera and performance throughout the cemetery on Oct. 19 and 20 called Nightfall.) Or during Onofri’s tour of Bay Ridge, you could take a detour to see a site detailed in Secret Brooklyn of a planned rail tunnel in Owl’s Head Park that would have linked the borough to Staten Island.

For the most part Secret Brooklyn’s trips are low-commitment. You might read about, say, the Masstransicope and then wait for the stars to align, when you happen to be on the B or Q headed into Manhattan and remember to look out for it. Onofri’s walks, on the other hand, require a full afternoon or morning of exploring, and are probably best enjoyed alone. The pace of reading, then walking a few steps, then reading, then walking again, would likely be maddening to a partner who did not have the book in hand. You are on a mission, after all, to appreciate a place you pass all the time, but have never taken the time to stop and inspect. Not that you need to purchase a book in order to enjoy a free gift like Prospect Park. You could simply take a walk in it.

Note: This article was updated to reflect the fact that the Quaker cemetery is open to the public a few times a year. We also previously stated that it is free for Quakers to be buried here; in fact, it is free only if the family cannot afford the token fee.