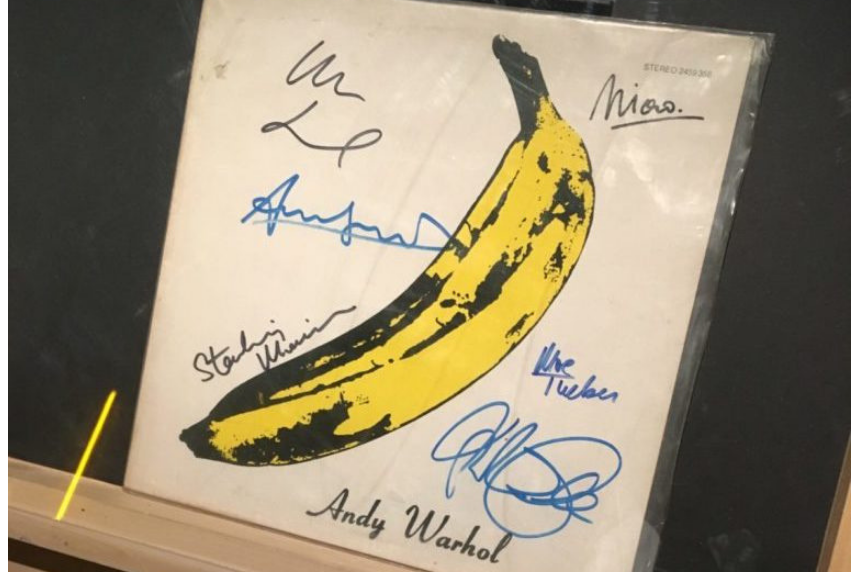 When you walk into The Velvet Underground Experience, the new exhibition in Soho spotlighting one of the greatest and most influential bands in rock and roll, the first thing you see is a brief film titled America America, directed by Jonathan Caouette. It’s a flickering montage of nine different clips running simultaneously, highlighting significant historical and cultural moments from the 1950s and early 1960s, with Allen Ginsberg’s narration of his own 1956 poem “America.” At first, you might question what this has to do with the story of a New York City rock band. But then you realize that before the emergence of the Velvets and the countercultural movement, America in the 1950s was in the midst a post-war boom marked by mass industrialization and conventional social mores. Through the 1960s, however, the country went through tremendous cultural and social upheavals. The iconoclastic music of the Velvets reflected those seismic shifts, particularly through Lou Reed’s songwriting about the dark, gritty underside of urban life. By the time the group broke up in the early 1970s, music and pop culture would never be the same.

Located on 718 Broadway, The Velvet Underground Experience is a multimedia show that chronicles the 50-year-plus history of the Velvets through music, film, photography, artifacts, and art. Curated by Christian Fevret and Carole Mirabello, the Velvets exhibit was first mounted in Paris two years ago and has now finally come in the Velvets’ home turf—fittingly not that far from where founding Velvet Underground members Lou Reed, John Cale and Sterling Morrison first rehearsed and recorded at Cale’s apartment on Ludlow Street. Before the official opening this past Wednesday, a private party was held at the exhibition featuring some of New York City’s hip denizens and notable figures including avant-garde filmmaker Jonas Mekas, James Murphy of LCD Soundsystem, and musician Laurie Anderson, who was married to Reed until his death in 2013.

Occupying two floor levels, the exhibit tells the story of a band that came of age in mid-1960s New York City, amidst its rebel musicians, filmmakers, and artists. It begins with the formative years of the Long Island-born Reed and the Welsh native Cale’s foray into rock music leading up to their meeting in 1964. Huge portraits placed throughout the first floor feature biographies of each of the Velvet members, including the glamorous German singer Nico, as well as the figures who loomed large in the band’s career such as Andy Warhol, the band’s patron. (Warhol, incidentally, will be the subject of a major retrospective opening at the Whitney on Nov. 12, a great companion piece to the VU exhibit just a .) A vintage show poster highlights one of the band’s earliest gigs in 1965 at a high school in Summit, New Jersey, opening for another band called the Myddle Class, while another one advertises Warhol’s Exploding Plastic Inevitable multimedia show, starring the Velvets at the Scene club. 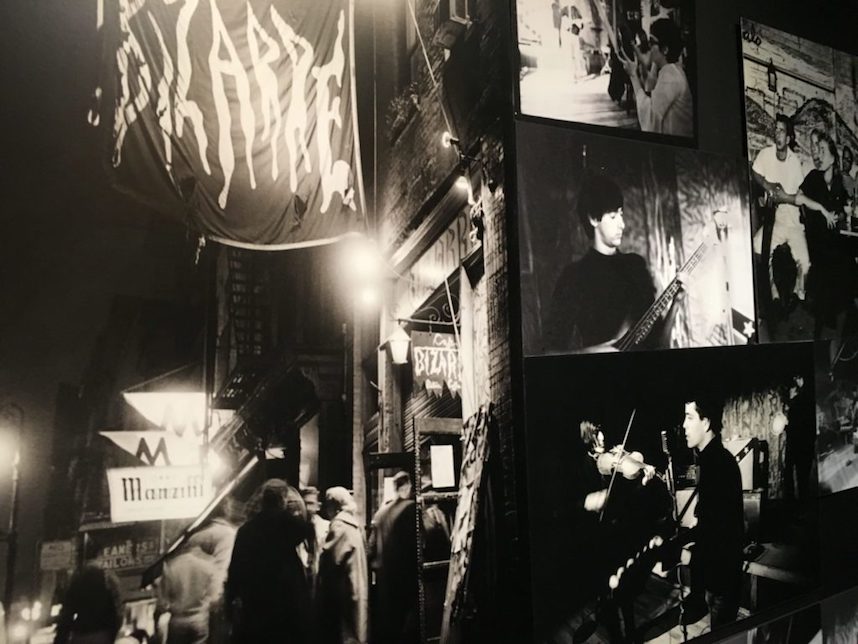 Cafe Bizarre was one of the Velvets’ old stomping grounds in the West Village and where Andy Warhol discovered the band. Photo: David Chiu

Walking past the photographs and displays in the exhibit’s sections, visitors relive the long-gone local haunts of the Velvets, such as Greenwich Village’s Cafe Bizarre, where the band performed a residency and was later fired for playing “The Black Angel’s Death Song ” after being told not to by the club’s manager. Another section highlights the scene at the Factory, Warhol’s Manhattan’s studio space where the Velvets rehearsed and members of Warhol’s crew—such as Paul Morrissey, Gerald Malanga, Edie Sedgwick and Billy Name—hung out. Photos feature the band’s infamous appearance at a psychiatrist convention in New York’s Delmonico Hotel. Glass displays house band memorabilia such as the Velvets’ first single “All Tomorrow’s Parties/I’ll Be Your Mirror,” as well as a rare copy of the band’s debut The Velvet Underground and Nico (a.k.a., the “Banana Album”) signed by all the members. Photographs show the band in Los Angeles during an ill-fated tour there in 1967 in which audiences did not understand their edgy music at all. While the show mostly focuses on the classic line-up era of Reed Cale, Morrison, and drummer Maureen Tucker, the Velvet Underground Experience also spotlights the Doug Yule-era of the band, marked by such later albums as The Velvet Underground and Loaded. The Velvet Underground story concludes with rare and remastered color footage of a concert featuring Reed, Cale and Nico filmed at the Bataclan Theater in Paris in 1972. 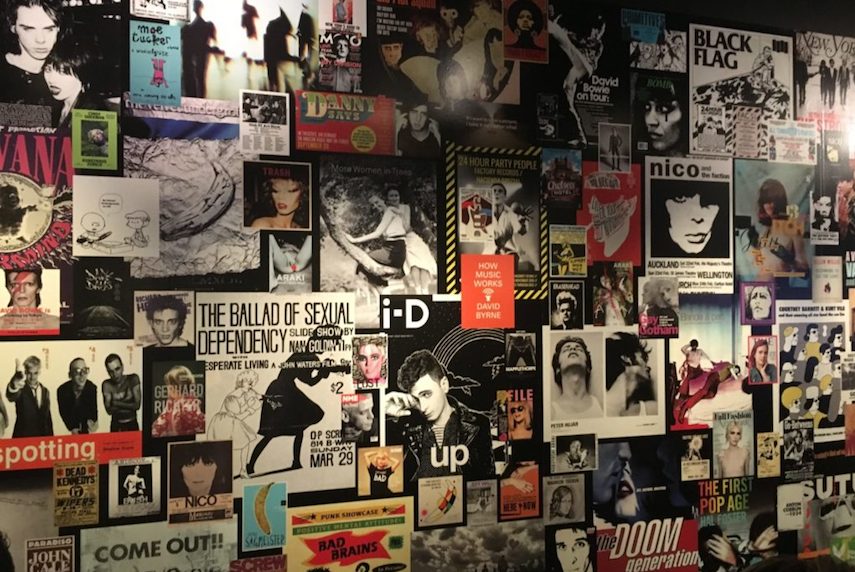 A collage of music posters, magazine covers and flyers of artists then and now acts as a testament to the outsize influence the Velvets had on music and film. Photo: David Chiu

But more than just a show about the group per se, The Velvet Underground Experience is a love letter to 1960s New York City—particularly the Village—and the creative orbit in which the Velvets inhabited. The lower level of the exhibit collects more artifacts from that era (such as a paperback copy on sexual behavior titled The Velvet Underground by Michael Leigh that inspired the group’s name) that are connected to the band and Warhol. Photos, periodicals, posters, and films spotlight the artistic contributions of important artists like Warhol, Mekas, and Barbara Rubin; there’s also a small theater inside that shows vintage experimental films one might see at the Filmmakers Cinematheque theater that Mekas founded. Also on the same floor is a huge collage of images, including magazine and album covers and music posters indicating the enormous influence of the Velvets and the New York City downtown scene on numerous artists then and now, such as David Bowie, Roxy Music, the New York Dolls, Suicide, the Smiths, the White Stripes, and LCD Soundsystem. Then there’s another floor level, the Bandsintown Studio, that hosts a live lounge and events space (Upcoming talks at the exhibit will feature legendary filmmaker Jonas Mekas on October 30, and Anthony DeCurtis, author of the acclaimed biography, Lou Reed: A Life, on November 6).

For fans of the Velvets and the bands that were influenced by them, or even just someone interested in the history of New York in the 1960s, The Velvet Underground Experience is captivating. Sadly, this show is also a sobering reminder of how much New York City has changed in the last 50 years, and not necessarily for the better, with gentrification and high rents that have made it difficult for struggling artists to thrive, not to mention long-beloved institutions and arts spaces that are shutting down at a frequent clip. But if there is a lesson to be gained from this exhibit, it’s the importance of being artistically creative and adventurous enough to challenge societal and cultural conventions. It’s something that the Velvets have done for the last 50 years and will continue to do so into infinity.