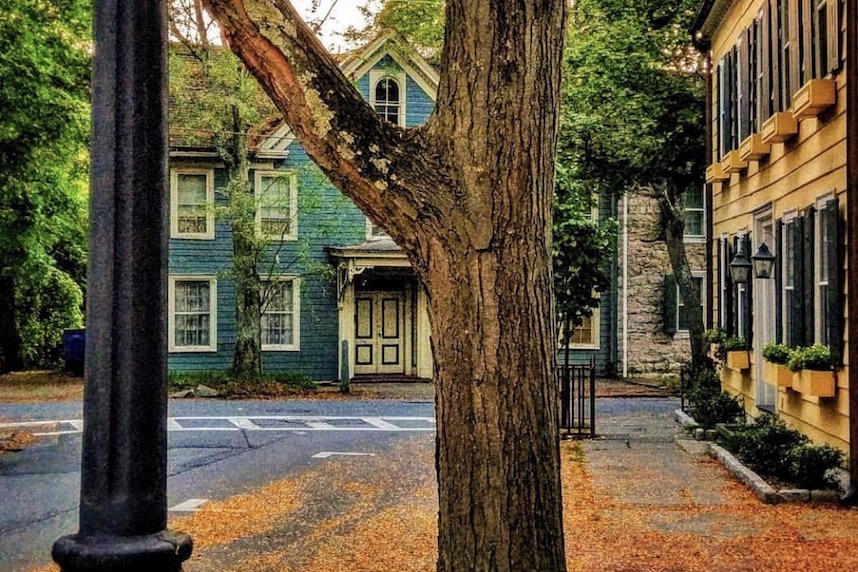 Kingston: the first capital of New York State. Burned by the British. The former home of a hulking IBM campus. Sounds…dusty, right? Indeed, Kingston has been a sleepy town since the IBM campus—which operated from the 1950s to the early ‘90s and employed over 7,000 people at its height—shut down. The closing of the facility was a major economic hit to Kingston and the surrounding towns in Ulster County. Ever since, Kingston has been a city with an aging population and several historic neighborhoods facing increasing vacancy. Until recently.

Kingston, today, is emerging as a hub of artistic activity and has seen a huge surge in the number of people moving from elsewhere. Unlike many of the more rural surrounding towns, most of Kingston’s newer residents aren’t merely coming to weekend or vacation, but to work, live, and stay. While the Hudson Valley has always had a strong artistic community, Kingston is unique in its deliberate zoning and programming meant to attract, house, and retain working artists and craftspeople, particularly through the Midtown Arts District initiative. While Kingston is home to dozens of metalworkers, jewelers, and woodworkers—most notably Black Creek Mercantile—it’s also becoming a hub of large scale fine art manufacturing, including Workshop Art Fabrication and newcomer Lite Brite Neon who are helping to shape Kingston’s new artistic economy. Mary Stuart Masterson’s Stockade Works is helping grow both professional and creative opportunities in the film and television fields. Kingston even has its own minor league soccer team, the Stockade Football Club, whose games draw packed crowds. Add to that a growing number of creative professionals and young families fleeing New York and other cities for lower cost of living and a less harried lifestyle, and you have the makings of a small city in the midst of a true and very unique revival.

To understand Kingston, a little geography lesson: the town of Kingston is quite large, and much of it is rural. The city of Kingston, on the other hand, is one of the more urban communities in the region, and certainly the most urban in Ulster County. Within its bounds are many residential neighborhoods, and three distinct commercial areas: Uptown (or the Stockade), Midtown, and the Rondout (referred to by many old-timers as Downtown, due to its location at the bottom of a steep hill, bordering the Rondout Creek). It’s over two miles to get from one end to the other, so a car or rideshare makes exploring much easier. Here’s where to make the most of a weekend in Kingston proper. 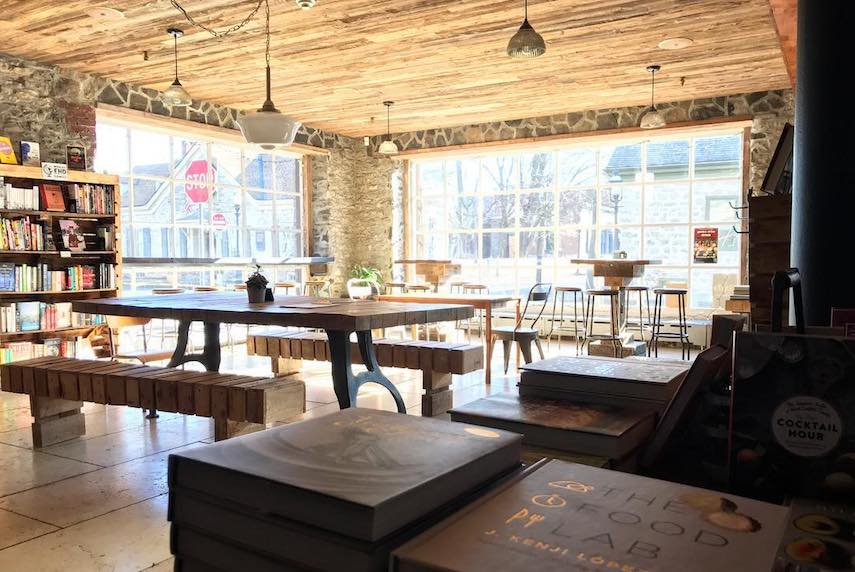 In the year it’s been open, Amanda and Anthony Stromoski’s Rough Draft Bar and Books has become a social hub for the community. Rough Draft is Kingston’s only independent bookstore selling new titles, and a tightly curated selection at that. On the food and drink front, there’s Counter Culture Coffee, savory pies, a small wine list and, most impressive, a funky selection of craft beers and cider. On Saturdays, local programmer-cum-baker Aaron Quint of Kingston Bread Lab churns out remarkably sophisticated loaves (beware: they sell out fast, get there early!). Some Saturday mornings, Aaron features a pop-up bagel bar with his own Montreal-style bagels; same deal for an occasional pizza night on Fridays. There’s something happening at Rough Draft almost daily, from literary trivia to book club meetings, book launches to performances. 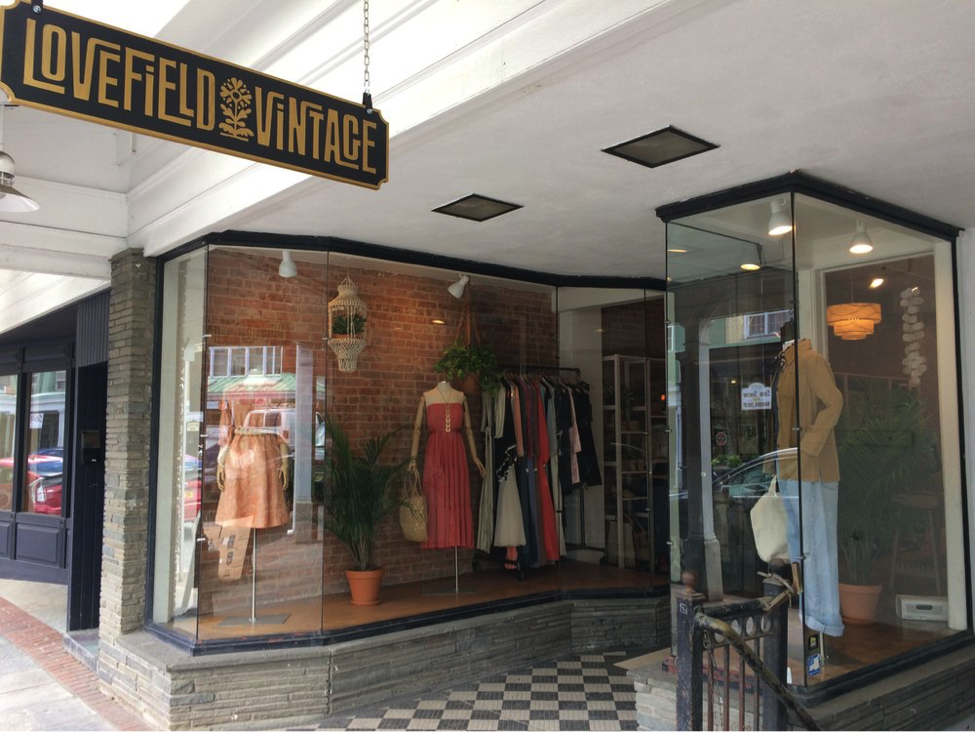 Spend Saturday morning strolling the Kingston farmers market, one of the biggest and most diverse of its kind in the region. Come the colder months, the market moves indoors to the Old Dutch Church, where it remains robust, but is only held semiweekly.

Along Main and North Front Streets, browse some of Uptown’s many boutiques and shops. For a sense of Kingston’s unique scrappiness and quirk, hit Half Moon Books, an exceptional used bookstore, and peruse the vinyl selections at Wright Gallery Records and Rhino Records. The exceptionally well-curated Lovefield Vintage is sure to have your next favorite item of clothing, as well as a small selection of homewares and accessories from local makers.

Just a few doors down is Rebecca Peacock’s breathtaking jewelry shop and studio, which features the eponymous owner’s own delicate, gem-studded jewelry, as well as the wares of a rotating cast of women jewelers, weavers, leatherworkers, shoemakers, and fine artists. If you’re stocking up for a long stay Upstate, the knowledgeable folks at Ester Wines and Spirits carry a large selection of wines from all over the world, and an exciting variety of liqueurs, aperitifs, and truly excellent booze. Keep an eye on their website to sign up for their monthly wine classes and keep abreast of their frequent tastings.

Stop for a bite at Sissy’s Café, for inventive, satisfying takes on the classics: eggs, soup, sandwiches, juices and smoothies, and salads, and finish off with a sweet treat from Kingston Candy Bar, an old-fashioned candy shop-cum-ice cream parlor featuring Jane’s, Kingston’s own terrific ice cream brand. 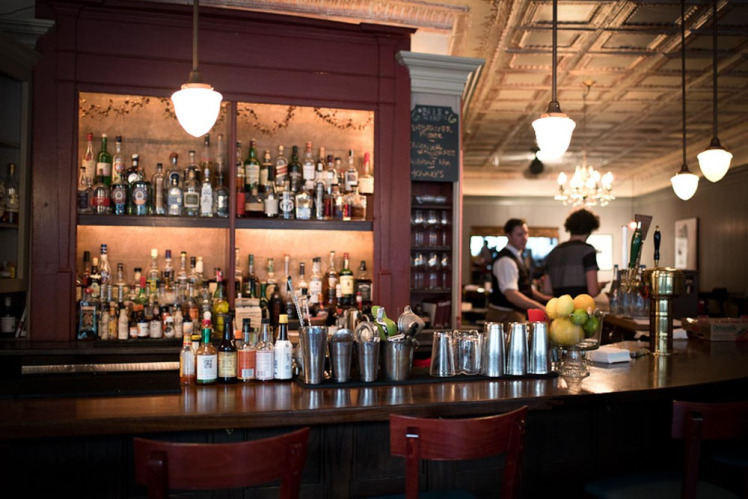 Bookend an evening Uptown with cocktails at Stockade Tavern and 10 Crown Street, treating yourself to a creative, upscale meal at newcomer Wilde Beest in between. If you’re still going strong, check out a show at BSP Kingston, which attracts national acts like Thurston Moore and Yo La Tengo to this little riverside city. 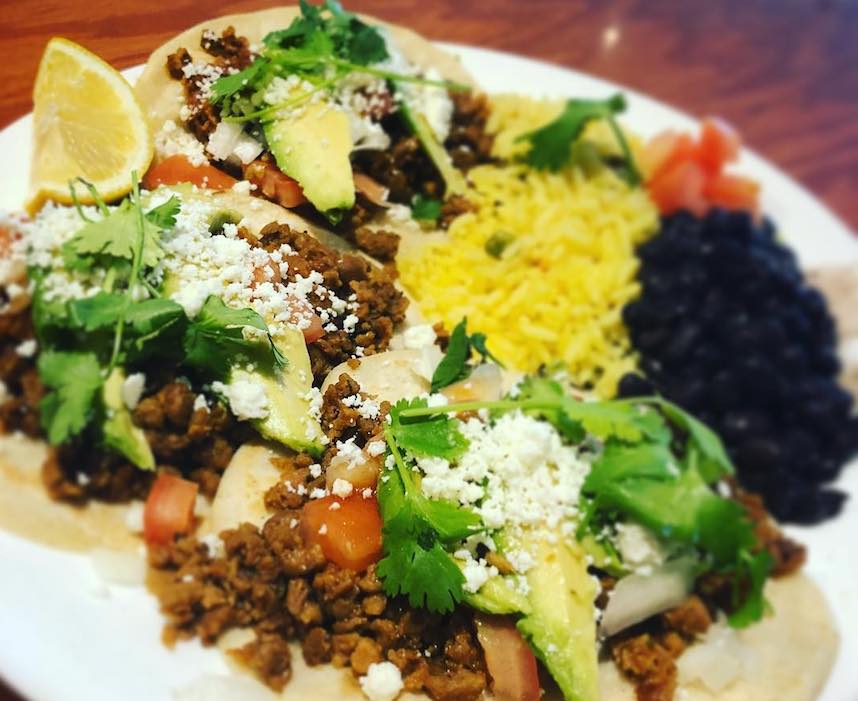 If you’re trying to locate the nucleus of Kingston’s creative revival, look no further than Midtown Kingston. A drive down Broadway recalls the once-thriving business district housed there, with a few of the city’s most beautiful architectural features still standing. Keep your eyes peeled for examples of the powerful political murals whose numbers grow with each annual O+ Festival, a Kingston-born weekend-long program of arts and wellness meant to raise awareness about working artists’ struggle to access and afford health care. Check for open studio, craft market, and gallery listings on Midtown Arts District, making an afternoon of winding through Midtown’s side streets and browsing gems of architectural salvage at Zaborski’s. Midtown eateries abound, but favorites include Taqueria Poblano for superlative pozole and enchiladas; Guatemalan-inspired pupusas, garnachas and dreamy fried plantains with crema and refried black beans at Peace Nation Café; and terrific meatballs and local beers on tap at Tony’s Pizzeria.

Related: The best things to do in the Hudson Valley 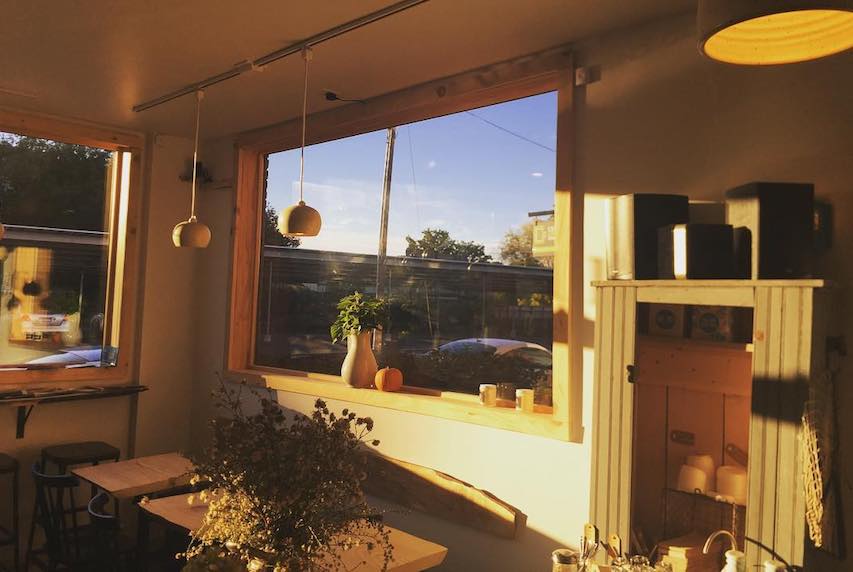 A real standout is newcomer Village Coffee and Goods, run by Mark Palmer and Anthea White, an Australian-born husband and wife team who moved to Kingston after years of touring together as The Hipstones. Palmer, an alum of West Village mainstay Buvette, hit a nerve in town with his market-influenced breakfast and lunch menu, a rotating selection of house-made baked goods and pastries, and, hands down, the best coffee in town. A bonus is their shelves laden with beautiful pottery from Woodstock-based LAIL and a fridge full of local produce and dairy. While you’re there, check the front door of Ferrovia Studios for tips on local arts happenings, including open studios and markets upstairs. 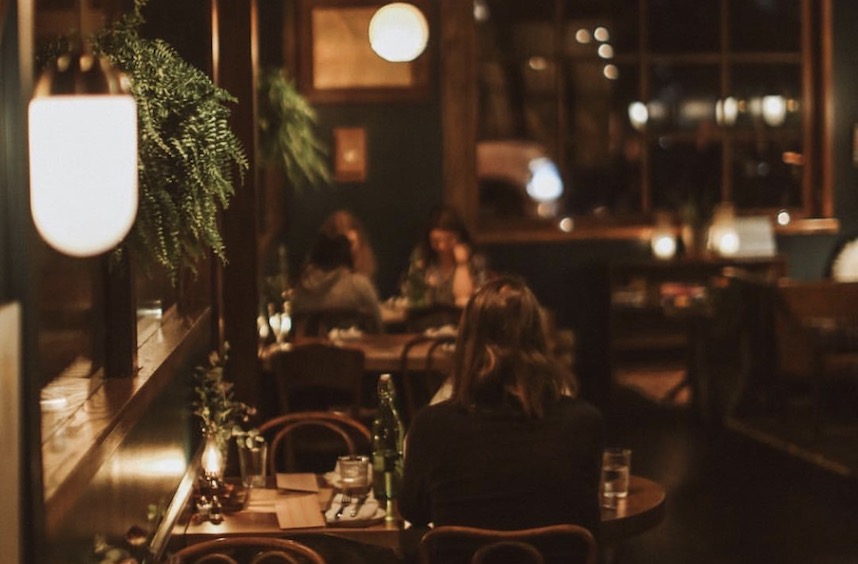 In the evening, if you’re not catching at show at the Ulster County Center for the Performing Arts (locally known as UPAC) or pseudo dive bar Tubby’s, just across the way, head over to Foxhall Avenue, where The Beverly offers up a huge menu of regional beers and comfort food (check out the back room for goings on—Jonathan Richman recently played) in an old-school Kingston pub, and sexy newcomer Lis Bar offers a more sophisticated option, with Polish-inspired tapas (go for the stuffed cabbage) as well as a large selection of spirits and cocktails.

If Uptown has the deepest history, and Midtown the most energy and grit, the Rondout is, undoubtedly, ground zero for Kingston’s romance and charm.

Stroll along the canal (being sure to check out what’s going on at the Hudson River Maritime Museum, which features woodworking classes at their boat building school), cutting over along the old railroad tracks and taking in the stunning views of the Kingston lighthouse on the Hudson, winding inland to Kingston Point Park and taking a dip (if the season’s right) at the beach. Across the inlet is the Hutton Brickyards, one of the most important sites of manufacturing in the making of New York City. Recently repurposed, it’s now the site of seasonal events like the high-end craft fair, Field + Supply. 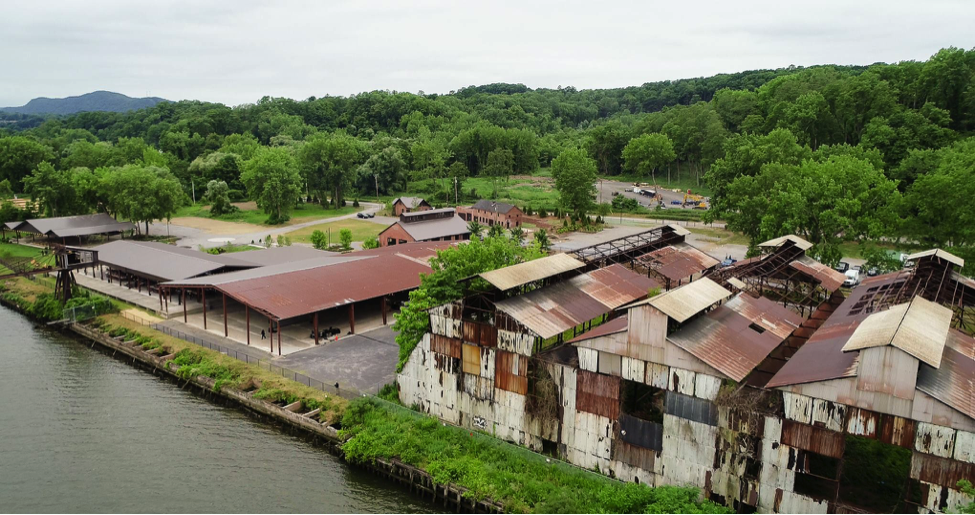 Once a thriving village all its own, the Rondout’s commercial zone is now relegated to a couple steep blocks on Broadway that run down to the Rondout Creek. But don’t be fooled by its small size—this tiny stretch houses some of Kingston’s best shops. Find something for everyone on your list (or simply treat yourself) at Clove and Creek, whose proprietor Scott Neild has used his terrific eye for design to aggregate some of the region’s most beautiful homewares, jewelry, foodstuffs, accessories and gifts. Next door, Kelli Galloway will take your breath away with her sought-after floral designs and bouquets at Hops Petunia. 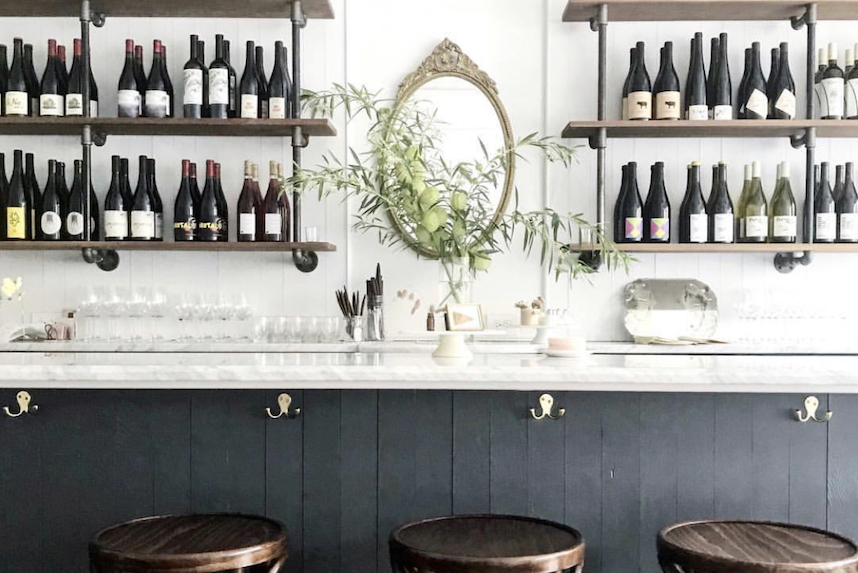 Onward down the road, stop into Antiques on the Hill for well-priced and eclectic finds before heading down to luddite’s delight South Manor Books & Gifts for postcards, stationery, pens and other necessities for the snail-mail revolution. Prepare to thin your wallet at Zephyr Kingston, where proprietor, designer and seamstress Caitlin Millard displays her own wares (and will customize anything you fall in love with) as well as a carefully chosen selection of clothing in luxurious fabrics (read: silk, cashmere, leather) by other independent makers. If dresses aren’t your thing, the leather goods at Jay Teske’s neighboring showroom may just be. Take a long, leisurely stop at the beautiful, petite Brunette Wine Bar. Tracy and Jamie Kennard will do you right, with their playful house-made snacks and terrific selection of natural wines by the glass and bottle. 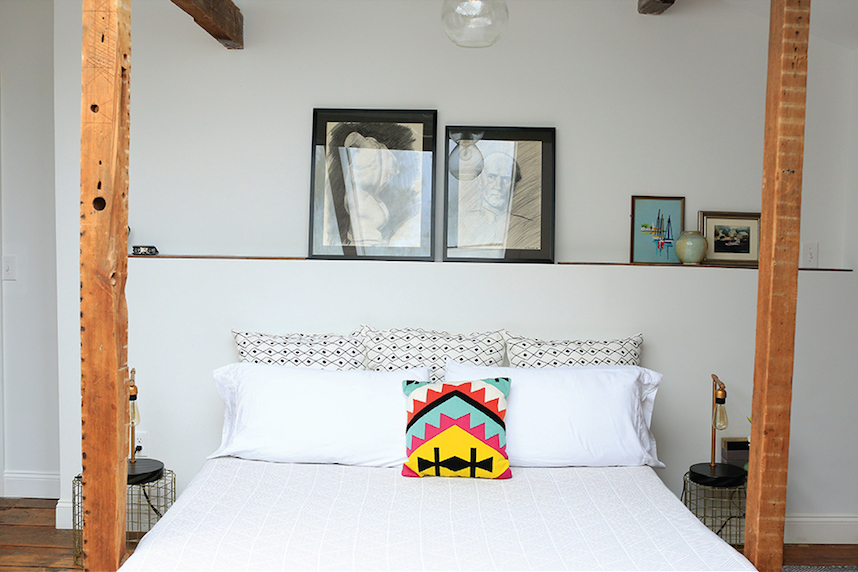 There will likely always be rooms available at the Best Western; otherwise, there are more and more boutique hotels opening up in Kingston like Hotel Kinsley. If you prefer a house rental, the Airbnb lodgings vary widely in size and price, as well as location. If you’re looking for walkability, make sure you’re in Kingston proper, rather than the surrounding hamlets. These are a few I recommend:

If you’re looking for a bit more TLC, the intimate and beautiful Church des Artistes is a favorite and a longtime hub of Kingston’s artistic community. Nearby, with lovely Rondout charm, The Forsyth B&B offers newly renovated rooms and suites and ample daily breakfasts.

Note: For traveling with kids, there’s no better place than Forsyth Nature Center, with a short nature trail, large playground, and free mini zoo, free and open to the public every day.

How to Get Here

Kingston is one and a half hours north of the George Washington Bridge, Exit 19 on the NYS Thruway. Trailways runs frequent buses from Port Authority to a station Uptown, or you can take the Metro North at Grand Central to Poughkeepsie (about 40 minutes from Kingston) or Amtrak from Penn Station to Rhinecliff (roughly 25 minutes from Uptown Kingston), and then take a taxi or rideshare. Though it’s not essential, it is helpful to have a car or anticipate relying upon local taxies, Uber or Lyft. The walk from Uptown to the Rondout can be as long as 50 minutes, so you’ll definitely want wheels to see all of Kingston.