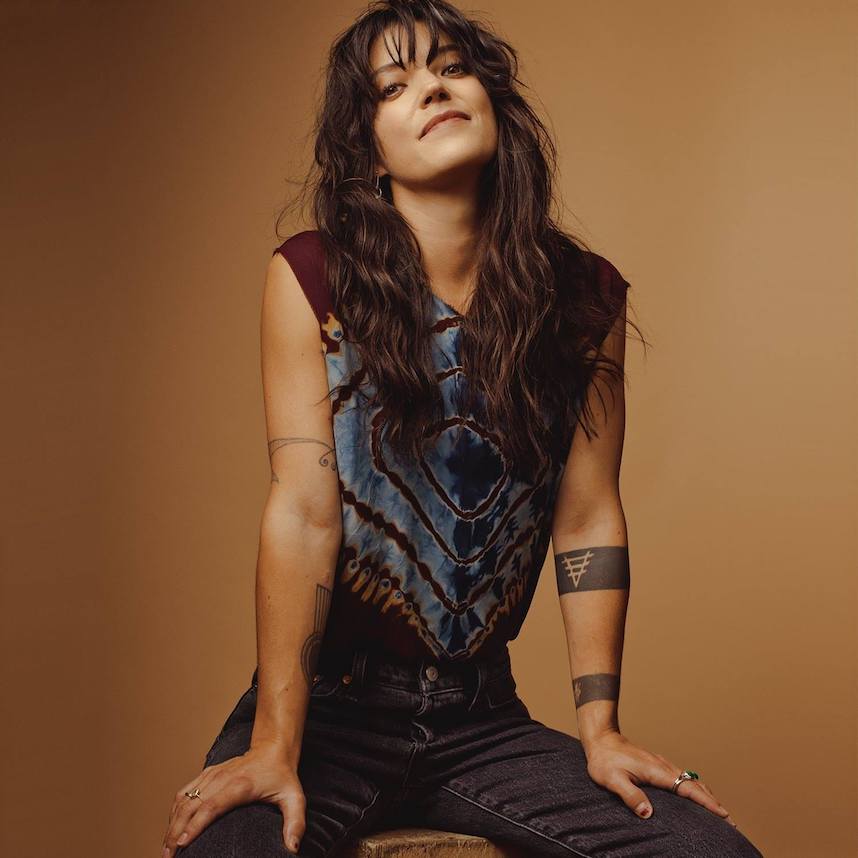 Sharon Van Etten begins her tour for her newest album this week. Her show at the Beacon Theater on Saturday is sold out. Photo: Ryan Pfluger

I have to admit this: as a longtime follower of Sharon Van Etten’s music, I was initially taken aback by the singer’s recent single, “Comeback Kid,” when it was unveiled last October. Stylistically, it was a major departure from her distinctive folk-rock sound on her previous albums—a blast of synthesizer-dominated danceable rock music accompanied by a dramatic vocal performance in the vein of Patti Smith and Pat Benatar. Instead of conveying a sense of vulnerability that has characterized her past songs, Etten sings quite defiantly on that particular stunning track. Even the music video for the song shows a brash and punkish side of Van Etten that contrasts with the seemingly mild-mannered yet engaging singer whom I first met about 10 years ago. I actually wondered if she was pulling a Taylor Swift, who made a similar transformation from country ingenue to mega pop star.

I didn’t have to worry after listening to Van Etten’s latest album, Remind Me Tomorrow, from which “Comeback Kid” appears on. Out a few weeks now, it’s the Brooklyn-based musician’s first new release in almost five years, following her hiatus from recording, a period in which Van Etten became a mother, acted in the Netflix series The OA, and attended school to pursue a degree in psychology. With Van Etten back to recording music, she is embarking on a new tour that will include an upcoming, sold-out show at the Beacon Theatre this Saturday, February 9.

And what an audacious return Van Etten makes on Remind Me Tomorrow. She employs John Congleton as her producer, best known for his work on St. Vincent’s albums. His sensibilities permeate throughout the record, which utilizes electronic elements as synthesizers, tape loops and drones to flesh out Van Etten’s songs from their previous demo forms. In fact, Van Etten put aside her own guitar for this particular record. She has said that upon first working with Congleton, she suggested such electronic music-driven acts as Portishead and Suicide as references for the record. Those synth-treatments are not only utilized on “Comeback Kid” but also on the trip-hop-sounding “No One’s Easy to Love,” the impressionistic road song “Malibu,” and the yearning “Hands.” Those effects and atmospherics also heighten the mood and drama of other numbers, such as the subdued “Memorial Day” and the haunting, if enigmatic, opening track “I Told You Everything,” whose lines evoke both a sense of catharsis and psychological drama: “Sitting at the bar, I told you everything./You said, ‘Holy shit. You almost died.’/Sharing a shot, you held my hand./Knowing everything, knowing everything-we cried.”

Some of the other songs on Remind Me Tomorrow take on a musical intensity bordering on anthems, like “Comeback Kid” and the fiery and urgent “Seventeen,” a timely commentary about gentrification and generational differences. In the role of the jaded older person who’ve seen the changes, she tells a young newbie: “Now you’re a hotshot,/Think you’re so carefree/But you’re just seventeen,/So much like me.” The passion and energy that radiates off that song evokes Springsteen at his late ’70s/early ’80s peak. Another standout tune is the poppy and soulful “You Shadow,” which presents Van Etten in a gospel-R&B mode that seems so uncharacteristic upon first listen, but it quickly hooks you.

Lyrically, Van Etten’s experiences during her musical hiatus—especially her raising a young son and being in a relationship—undoubtedly informed aspects of the songwriting on the new record. In contrast to her previous songs of vulnerability and romantic heartbreak, Van Etten’s outlook appears to be a little more upbeat this time around. There are some really touching love songs on Remind Me Tomorrow, from the sublime and heartfelt ballad “Jupiter 4” (“Baby, baby, baby/I’ve been searching for you./I wanted to be in love.”), to the album-closing “Stay,” whose lines references her then-pregnancy  (“Have you all of my lifetime./Kinda hard to make light./Imagining when you’re inside/When you make those kicks at night.”). As the writer Amanda Petrusich perfectly put it in her review of the album for The New Yorker: “It’s the first of her records to linger more on contentedness than on pain.”

On face value, Remind Me Tomorrow may seem like a sonic jolt to Van Etten’s fans who first fell in love with her contemplative folk rock. But when you think about it, the new record merely represents another progression in her music: her second and third albums Epic (2010) and Tramp (2012) found her working with a band and going electric following her 2009 debut record Because I Was in Love, a mostly all-acoustic effort. Despite how her sonic explorations on Remind Me Tomorrow might be perceived to fans, Van Etten recently told me in an interview for NYLON, “It’s still me,” meaning that her voice and her songwriting that deals with the complicated matters of the heart haven’t changed. So it’s a not sign of her “selling out” to reach out to a broader audience, but rather an effort to expand her sound. A nearly five-year gap between studio albums seems too long from someone with an acclaimed catalog of songs, which makes Remind Me Tomorrow a very welcomed return.