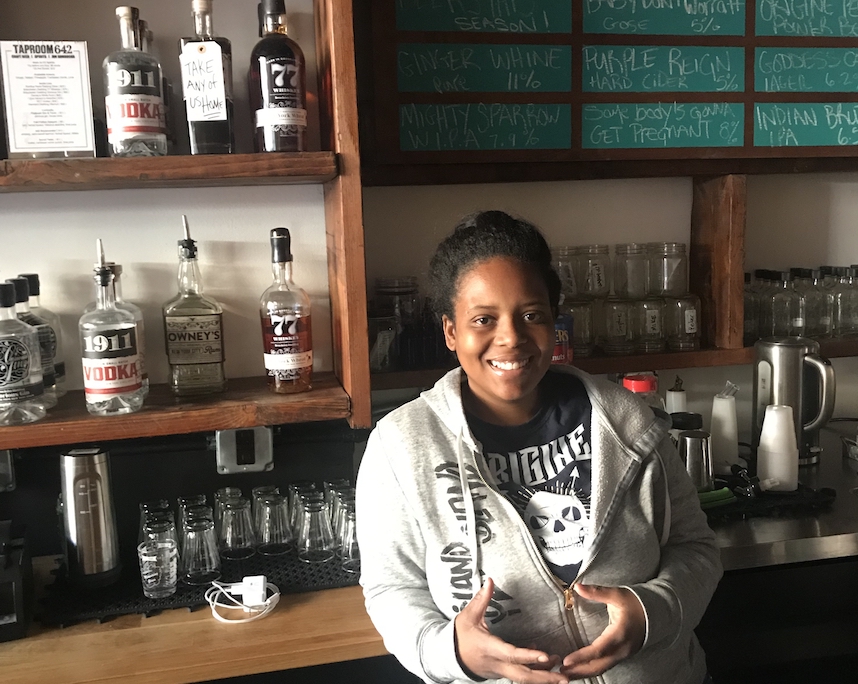 Danii Oliver, owner of Island to Island Brewery in Flatbush. “I’m not interested in beer that marginalizes people,” she says. “As many people as there are on the planet, that’s as many styles of beer that there are.” Photo: Regina Bresler

In an area a realtor might sell you as Prospect-Lefferts but your uncles assure you is Flatbush, sits Taproom 642, the tasting room and headquarters of Island to Island Brewery, a small-batch brewer of ciders and beers; its probiotic producing subdivision, Brooklyn Jun Brew, as well as House of Juice. And while the term “craft-brewery” often conjures visions of beer-bros, Island to Island was founded by a very capable and creative brewmistress, Danii Oliver, and born of both health necessity and a familial passion for beer.

Seeking the benefits of juicing, Oliver began at home with a blend of sorrel, apple, pineapple, and cayenne pepper (what has now evolved into her flagship cider, Purple Reign), which led her to explore the natural process of fermentation and foster an interest in jun, a honey and green tea based cousin of kombucha. Those experimentations started in 2015, and spread to beer, which she shared at bottle swaps during the holidays, then began selling at pop-ups, until she outgrew the confines of a Brooklyn kitchen and became a fully legalized brewery in 2017. These very personal roots haven’t been forgotten. The business is still a family affair, with her husband tending to engineering needs and even her five-year-old daughter brewing. “My kids are always with me, my daughter brews with us. She actually makes the Mighty Sparrow. People ask, ‘Well how could that be?’ She’s home-schooled—so that’s chemistry class, biology, and communications.” 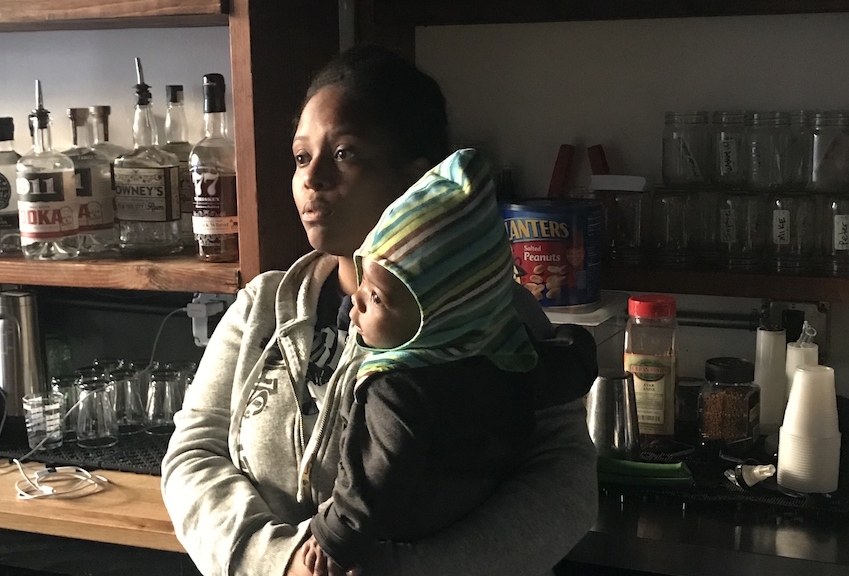 Island to Island is very much a family business, with Oliver’s husband tending to engineering needs and her 5-year-old (not pictured) lending a hand with brewing. Photo: Regina Bresler

Flavors are unique and at once familiar. Predominantly fruit based, and invoking spices not often associated with your average six-pack, you will regularly find notes of clove, star anise,  and sorrel in many of the pours. They brew tepache, a pineapple rind probiotic, common in Mexico and the Caribbean. The Goddess Califa, aka Candy Corn Lager, is made with candy corn, the artisanal sort made with honey and corn but devoid of corn syrup and ready to challenge the opinion of even the most hardcore haters. The Ginger Whine, which could never be confused with standard ginger ale you find at the bodega, is dry and strong at 11%, and is strictly made of pressed ginger. Nothing else. Seasonal flavors, like the mulled cider, exist in spurts, but the sentiment of inclusivity is ever present. “I didn’t come up through the homebrew world, I came up through the health world. So I want to brew beers that inspire me through the ingredients, and make people have a good time and bring people together. I’m not interested in beer that marginalizes people. As many people as there are on the planet, that’s as many styles of beer that there are.” They are an exclusive commercial brewer of Jun on the East Coast, and only one of two in the country. It’s delicious on its own, but amazingly helpful at the bar when you’re feeling the alcohol hit in the middle of a tasting; this I can attest to. A true kombucha, the probiotic eats alcohol. 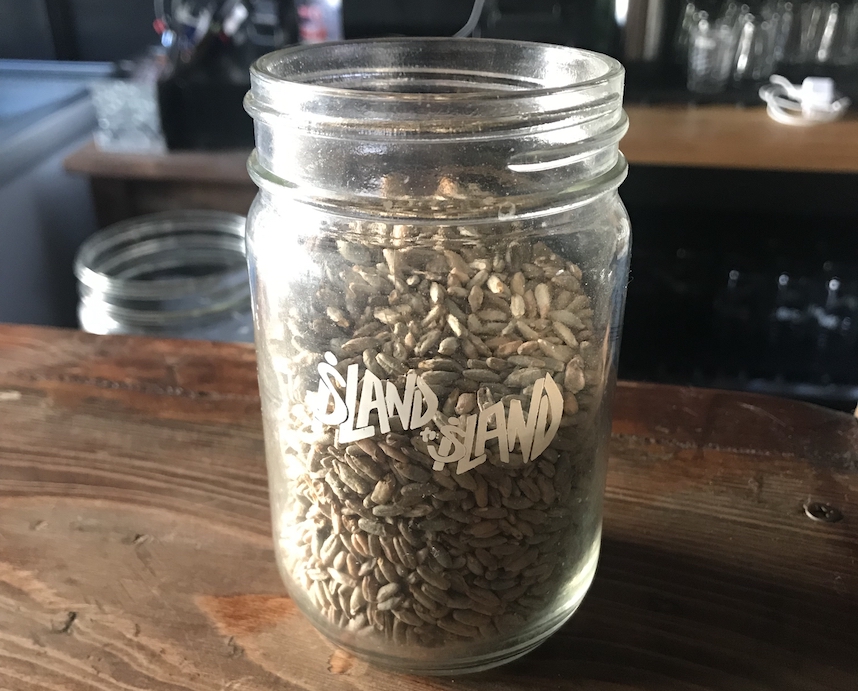 Every ingredient used in Oliver’s juices and beers, as well as every spirit at the bar, is grown or made in New York state, like the hops used in their IPA. Photo: Regina Bresler

The space is intimate, emanating a nurturing energy one generally doesn’t associate with a bar. Names of libations are personal, nodding to her roots in Trinidad, and the greater mission of conscious consumption and giving back to community. All elements used in production are locally sourced in New York state (they hold a Farm Brewery license), from the raw honey in the Jun sourced from Tremblay Apiaries to the grains used in the IPA. “We’re dedicated to the local footprint that food makes. If you’re looking at cheap grains they’ve been sprayed with Roundup to grow and again to dry. That’s neurotoxins you’re introducing into your body. If you go with locally sourced products, you’re avoiding the preservation process needed to transport products a long distance, and also working with people that can’t afford to alter the food like industrial farms can.” And it’s not just their brews; every spirit at their fully-stocked bar is made in state.

Origine People Power, aka their black cake porter, takes its flavor cues from traditional Caribbean celebration cake, made with a blend of fruit (currants, raisins, prunes, cherries, lime, lemon and grapefruit peel) soaked in Owney’s Rum, another woman-owned and distilled product made in Brooklyn and blended with Taino Dominican rum, and is named after Origine people, meaning those whose bloodlines originate in the Americas. This isn’t lip-service. Island to Island has teamed with the People Power Project, a grassroots organization that has brought together craft brewers nationwide to support the ACLU, created sustainable clothing whose proceeds benefit homeless shelters through Origine Apparel, and regularly hosts events such as Bashment Without Borders, a reggae party whose proceeds partially go towards the Fianza Fund, a community bond fund to help migrants detained in New Mexico and the far west Texas area. 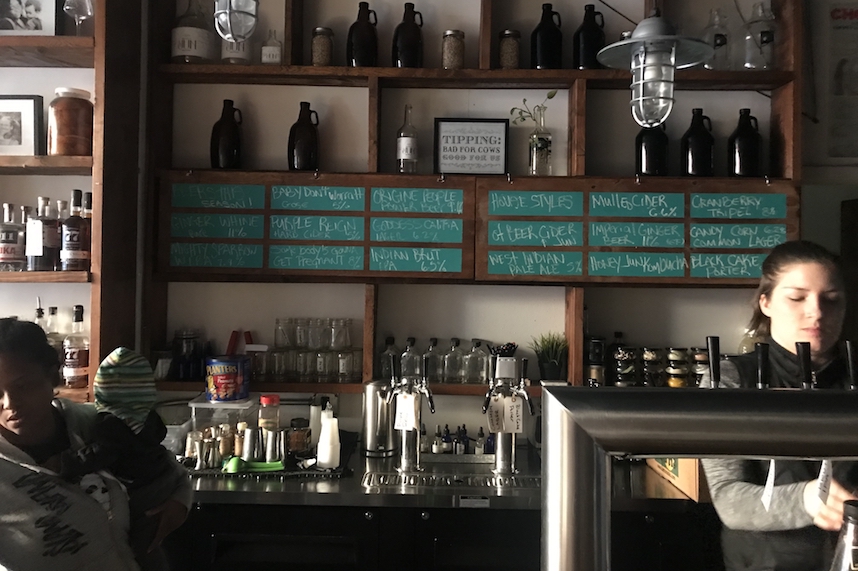 All of these personal and political elements come together at the Taproom. “Beer always brought my family together, and I come from a matriarch. So hearing that this is Bro culture and that women don’t drink beer, I’m like ‘What?!?’…I’ve met every single ism- racism, sexism, classism, even educationalism. Everything.”

Frequently bucking these isms, the Taproom regularly hosts LGBTQ+ nights, as well as events for expecting, new and nursing mothers. Oliver herself knows the difficulty of being bounced from bars and events both as a pregnant woman and a nursing mother. “Everyone wants to touch your belly, but no one wants to include you or invite you out. I like these events because women can feel welcome, and not feel any pressure to drink. They can have a mocktail or some Jun, or enjoy beer which is great for lactation.” Her space is a welcoming safe haven by design. “If a customer wants to do an event here, the answer is always yes.”

Look for (or book) pop-ups from any arm of Island to Island at festivals and events by following @islandtoislandbrewery on Instagram, visit the tasting room to purchase a growler, or join them for their NYC Beer Week event, Lager & Jerk Wings, on March 2.