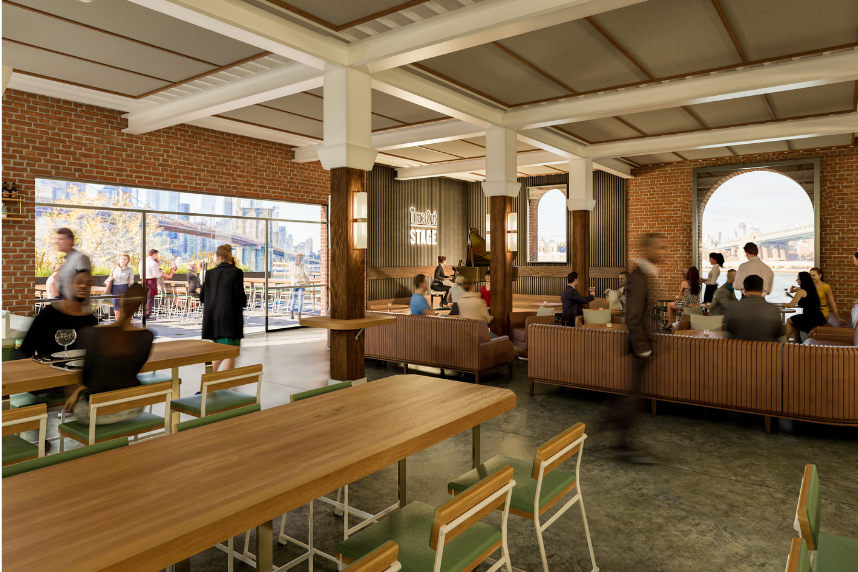 Time Out Market will encompass two floors in Dumbo, incorporating over 20 food vendors, a stage and an incredible view. Photo:  Time Out New York Market

Time Out New York is mostly known in New York City as a free, weekly events magazine that keeps you occupied on an otherwise boring subway ride. But in Portugal, the media company opened a 35,000-square-foot food hall four years ago, and had 3.6 million visitors last year. Time Out Market Lisbon has become the number-one tourist destination in Portugal, and now Time Out is hoping to see the same results in the U.S. 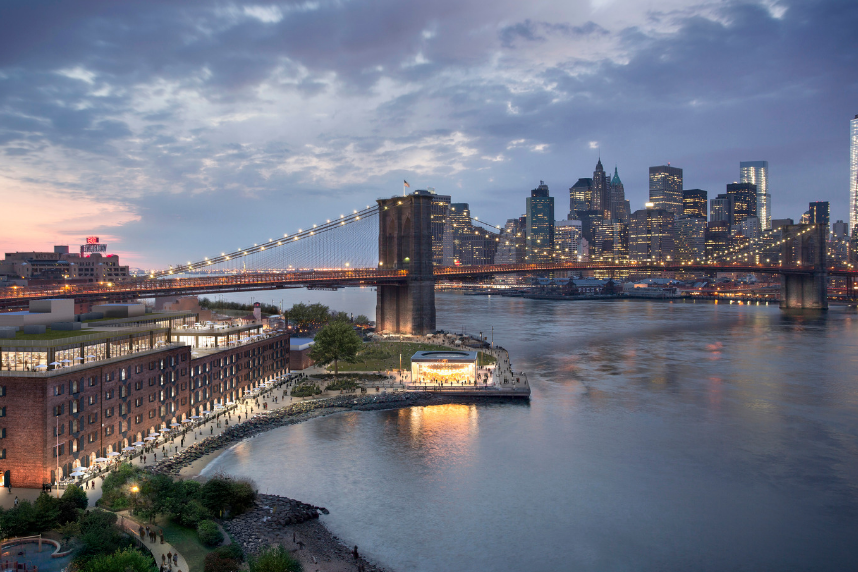 One of the most attractive aspects of the market is the view from the top floor, which will encourage loitering, especially at sunset. Photo:  Time Out New York Market

Opening soon in Dumbo’s Empire Stores this spring, as well as Miami, Boston, and finally Chicago, they are planning an elevated foodie experience for its Amerian markets. Inside its two floors of the revitalized warehouse at 55 Water Street, there will be around 20 vendors including Nur, Breads Bakery, Chef Ivy Stark, Pat LaFrieda, Mr. Taka, Ice & Vice Craft Ice Cream, Loco Coco, Juliana’s Pizza, Reserve Cut, Alta Calidad, Miss Ada, Bessou, Felice Pasta Bar, Clinton St. Baking Company & Restaurant, Jacob’s Pickles, DŌ Cookie Dough Confections, Avocaderia and more, who will all be making signature dishes that give a taste of NYC. A roof deck will feature a stunning view; there will be three bars; and a stage that will bring in acts to entertain visitors. With 520 seats, patrons will have the option to eat a quick lunch, lounge all day taking in the sights, or just gather with friends over a bottle of wine.

We spoke to Didier Souillat, the Chief Executive Officer of the Time Out Market, to find out what to expect with the Dumbo opening—and why you should not write this off as just another food hall. 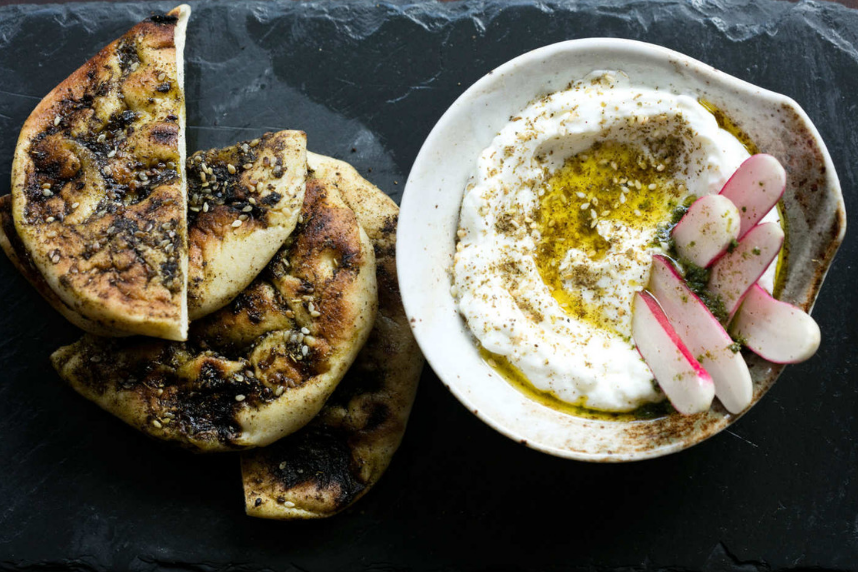 One vendor we’re excited about is Miss Ada, known for putting their twist on modern Mediterranean cuisine. The restaurant is in Fort Greene opened in 2017 and is always packed no matter what time you get there. Photo: Miss Ada

BB: How did the first Time Out Market in Portugal come to be?

DS: The editorial team of the magazine in Lisbon had this great idea of bringing the magazine to life because the magazine is a go-to guide for what’s hot in the city in terms of food, beverage, art, fashion, music, and all this.

So will you be using the blueprint of Lisbon or was there anything that you learned from that experience that you are now doing differently?

Because of [U.S. liquor license laws], we actually operate all the bars, but in Lisbon, everybody operates their own beverages. Here we provide everything for the chefs, so the difference that we learned from Lisbon is that we’re doing short-term contracts with all our partners and we’re providing everything so that it is easy for them to just come in and cook. We know how busy all the chefs are so we definitely don’t want them to think, “Oh my god it’s another opening, how am I going to get ready?” We do all the marketing, we do all the installation, we do everything. The chef shows up with eight items on his menu that represents him well. And we make sure, because of our media platform, that any national or international tourists that come to New York, if there’s one thing they have to do in three or four days, they’ve got to come here. 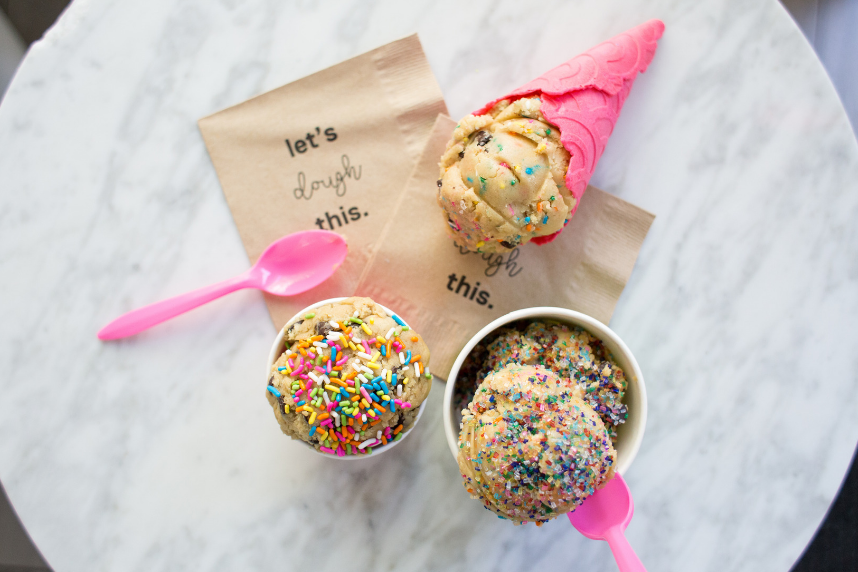 Your Instagram will be happy with treats like DŌ, Cookie Dough Confections, the safe-to-eat cookie dough that people have been known to wait up to two hours for at the Manhattan branch. Photo: DŌ

How did you decide which cities to expand to?

We’re putting ones in the cool places. We choose our locations quite carefully. First, the buildings need to have a sort of DNA, a story to tell. Then, that we have people that live there, people that work there and also that tourists go there. 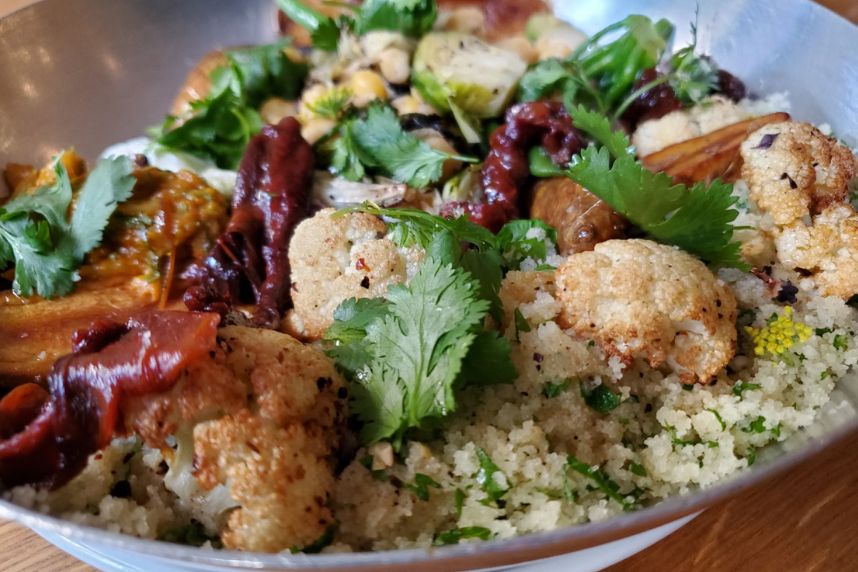 Nur, the modern Middle Eastern restaurant in Gramercy will be bringing some of its iconic couscous dishes to Dumbo with NURish. Photo: Nur

Why is Dumbo the right neighborhood for the Time Out Market?

It’s been up and coming for a few years but it’s hot and I want to be in an area like that. Plus, this building is beautiful. Also, the Brooklyn Bridge has thousands of people [walk across it] every day, whether it’s the fourth of January or in the middle of August. What do they do at the end? They go to the end and then they turn around and go back. We’re going to go, “Hey you’re going to continue walking for another twelve minutes, please, because it’s something you’re missing.” 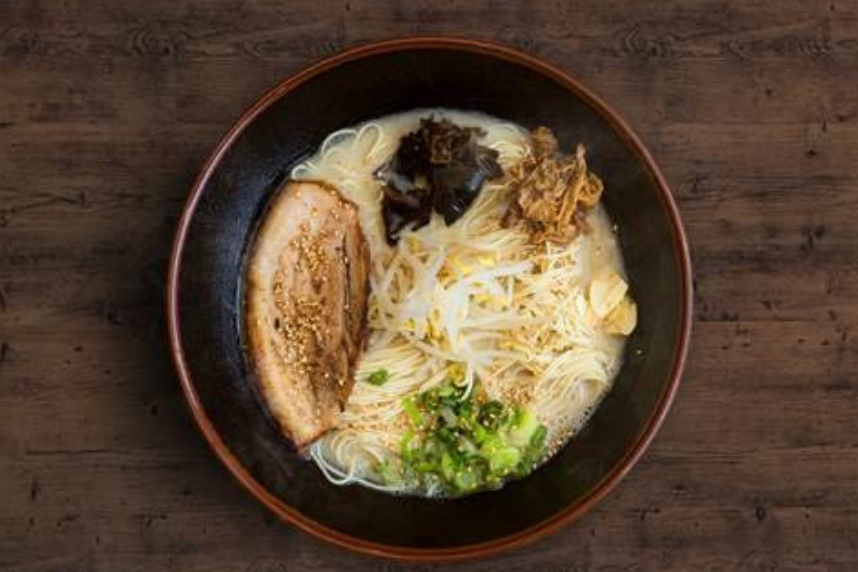 Mr. Taka has been serving up Tonkotsu Rame on the Lower East Side since 2015. You can expect the famous Miso Ramen with chicken and bonito fish broth, wavy flat flour noodles, sliced pork belly, ground pork, scallions, bean sprouts, chives and cilantro, Plus, a vegan option. Photo: Mr. Taka

So for a customer that comes to the food hall, it’s like you’re getting the best of New York experience? 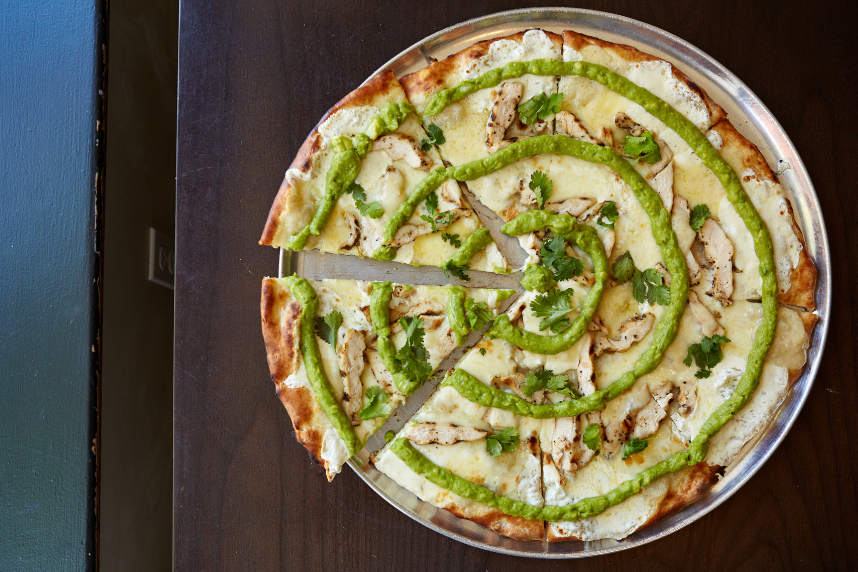 Even though Juliana’s Pizza is only a few blocks away, this will be another location—where hopefully you won’t have to wait in line all day to get a notorious slice of pizza. Photo: Juliana’s Pizza

Why is Time Out expanding from a magazine into a food hall? Has media become such a difficult business that you need to diversify into food halls/real estate?

There you go. You got the answer. You know we’re a global media and an entertainment company, right? There is no doubt that markets make more than print. So, a few more markets bringing the magazines alive have advantages. We create new viewership that transforms into new readers and new people online or [on] social platforms. Our reach expands but through quality. We’re not a food court. We’re doing serious food and cultural centers. The reason is to bring the magazine to life. 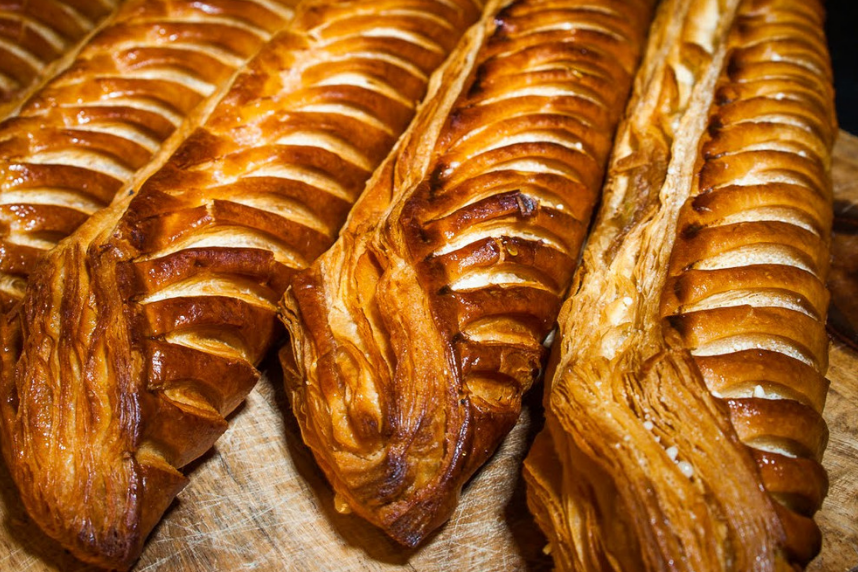 Breads Bakery is coming with two concepts: the Bakery and the Sandwich Shop. The first will create fresh pastries baked all day for maximum freshness and the second will create sandwiches on Jerusalem Bagels. The Tunisian Tuna sandwich will include Italian tuna, hard-boiled egg, potato, parsley, house-made harissa, and preserved lemon. Photo: Breads Bakery

There are so many food halls already in New York, especially Brooklyn. How is the Time Out Market going to be different?

The experience, number one. Number two, we don’t do street food. I’ve got nothing against street food. And I think it’s fantastic when everybody’s doing street food. We democratize fine dining. It’s not only that we’re doing great food but [we’re using] chinaware, glassware, silverware, which nobody else does. We don’t do disposable. It’s a serious food hall, it’s not a food court. 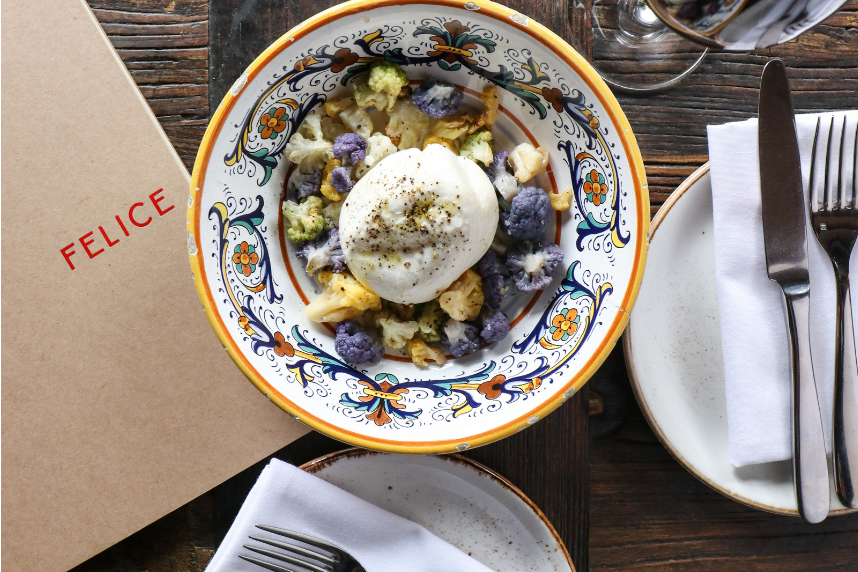 Felica Pasta Bar will be providing authentic Italian pasta and fresh antipasti. There are already locations on the Upper East Side and Downtown, but this will be the first in Brooklyn. Photo: Felica Pasta Bar

Will this be family friendly?

We’re very family [friendly]. Families can come here. Kids can come here and have something for them. I go with my family when I go to Lisbon. We get a nice bottle of wine and the kids get whatever they want, and if they want dessert, they go and get some. There’s so much happening that those kids are actually not on their phone all the time, they’re actually looking at what’s happening. There’s a lot to see. 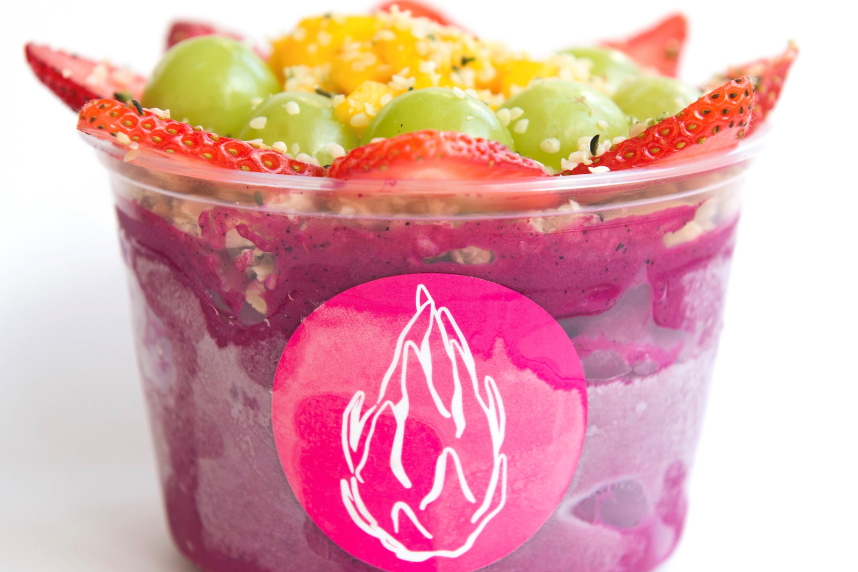 Loco Coco will be bringing its vegan superfood smoothies, smoothie bowls, and fresh juices. The shop on the Upper East Side has garnered attention for dishes like “Enter the Dragon Fruit Bowl”, but this location will also have Time Out exclusives like the “Superfreak Smoothie” with wild pink guava, strawberry, banana, elderberry, CBD honey, and omega-3 hemp milk. Photo: Loco Coco

So, would you consider this an upscale experience?

We’re not a Michelin food hall. We’ve got quality. People still go up to the counter, pay [for] their orders. But this environment with the workmanship that’s been done on this food hall and the quality you get in your plates and your drinks [is different]. At the end of the day, we’re not asking you to clear your tray. We’ll handle that.