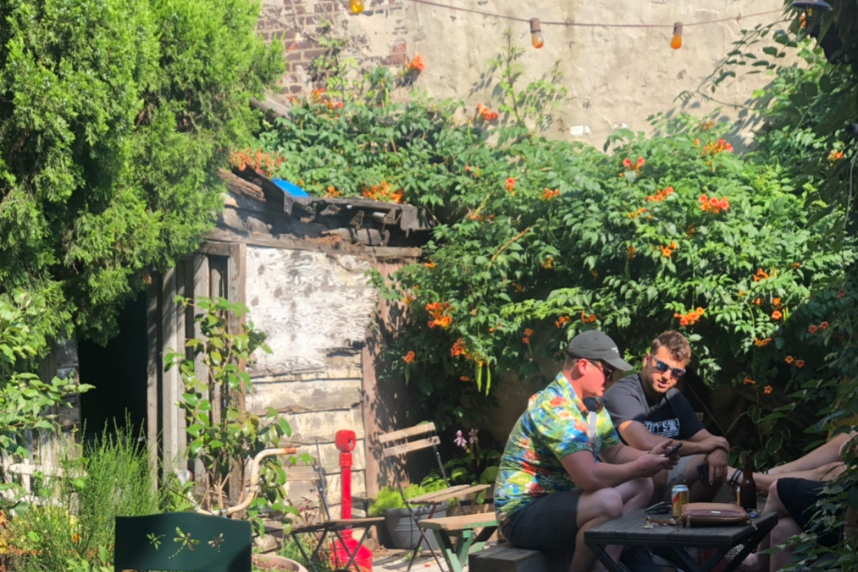 Summer is the best time to stumble upon spots hiding in plain sight, like the garden at Sunny’s Photo: Nicole Davis

One of my favorite things about a neighborhood Immersion, the event series we produce each summer with Brooklyn Brewery, is the fact that I get to spend an entire day with friends, in a place I don’t often visit. You don’t need an Immersion to get this same effect, of course: You could spend a day in any New York neighborhood, any time of year. Summer is the best season for an epic walking tour, though, particularly with lots of food and drink involved. On this year’s Red Hook Immersion, for instance, I deviated from the official route, stopping first for an ice cream at Ample Hill’s, then a cold one at Sunny’s, a bar I hadn’t spent serious time in since I was oh, 24. I split a burger at Red Hook Tavern, enjoyed a whiskey tasting at Widow Jane and a cocktail next door at Botanica and ended the night with a picnic at Valentino Pier, aided by friends who brought homemade fixins that we rounded out with a rotisserie chicken from Fairway, a key lime pie from Steve’s, and their limeade for mixers.

Not every neighborhood is as easy to improvise an entire day in (and not everyone likes a bar crawl), so we introduced a column last year called 10 Hours In that lays out an ideal day in, say, Greenpoint, The Rockaways, Park Slope, Crown Heights, Ditmas Park, Williamsburg, Bushwick, Clinton Hill, Dumbo, and yes, Red Hook. Presuming you won’t be springing for a hotel at night, it’s like a staycation without the sleeping away from home part. (Which you can use to justify all the money you’ll spend eating and drinking out for one day in New York.) And if you tackle it with a friend or two, it’s guaranteed quality time with people you probably don’t see often enough.