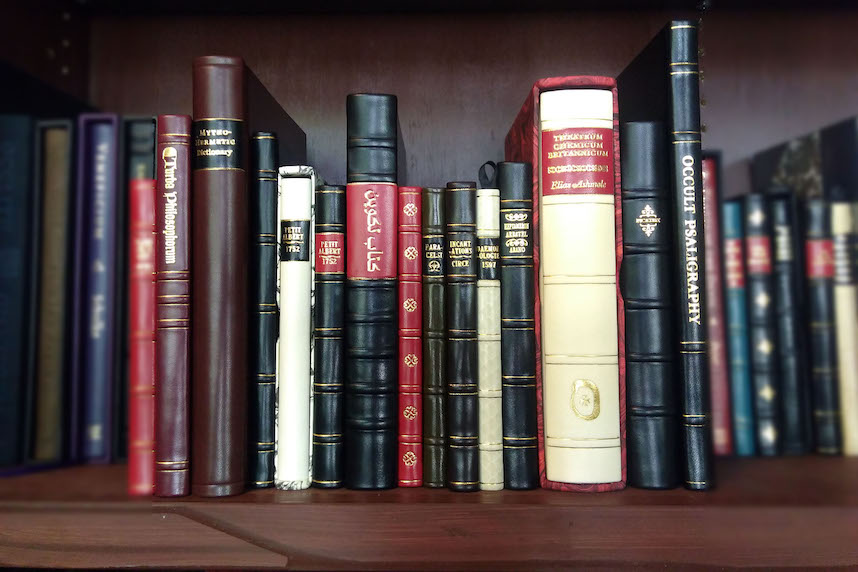 A selection of the occult and esoterica titles that will be sold at the Brooklyn Antiquarian Book Fair this weekend from Mortlake & Co., ranging in price from $40 to $400. Photo: Mortlake & Co.

As a teenager, I found a copy of Wayne Buckland’s Complete Book on Witchcraft in a thrift store. It was the late 1990s when The Craft was compulsory viewing for any aspiring goth and Buffy the Vampire Slayer―with her witch bff Willow―dominated our screens. I bought the book and began a sojourn into the world of witchcraft, dutifully completing the exam questions at the end of each chapter.

Like many, I grew out of my interest, until recently, when I was compelled to search for that same book online and bought a revised edition. I’m not alone in this renewed curiosity or purchasing of Wiccan texts. This weekend (Saturday, September 7th to Sunday, September 8th) will see the return of the Brooklyn Antiquarian Book Fair at the Brooklyn Expo Center in Greenpoint, which for its sixth annual edition will focus on subculture and highlight a number of new trends in book collecting, particularly among millennials. Magic and witchcraft are high among them.

“We’re in the middle of an occult renaissance,” says Melissa Madara, co-owner of Catland Books in Bushwick, where a glowing pentagram illuminates the shop window for passersby. “A few years ago, people were interested in beginner-friendly texts, and now we’re seeing this renewed interest in scholarly occult texts. Over the past six years, every year we see more people deepening their practice.”

Just as tarot, crystals, energy healing, and astrology have reentered the cultural mainstream, so has witchcraft. The tag #witchesofinstagram has 3.2 million followers; Sabrina the Teenage Witch has been revamped for today’s audience, now darker and more conflicted, and even Urban Outfitters stocks The Little Book of Spells. The publishing world has experienced a surge in grimoires (spell books) and witchcraft tomes. To name a few of the many books currently available for preorder: Wild Magical Soul: Untame Your Spirit & Connect to Nature’s Wisdom with “hands-on practices, spells, and rituals” from Monica Crosson; Spellwork for Self-Care: 40 Spells to Soothe the Spirit; and Revolutionary Witchcraft: A Guide to Magical Activism by Sarah Lyons, an intersectional guide for activists and witches to practise politically-motivated magic. 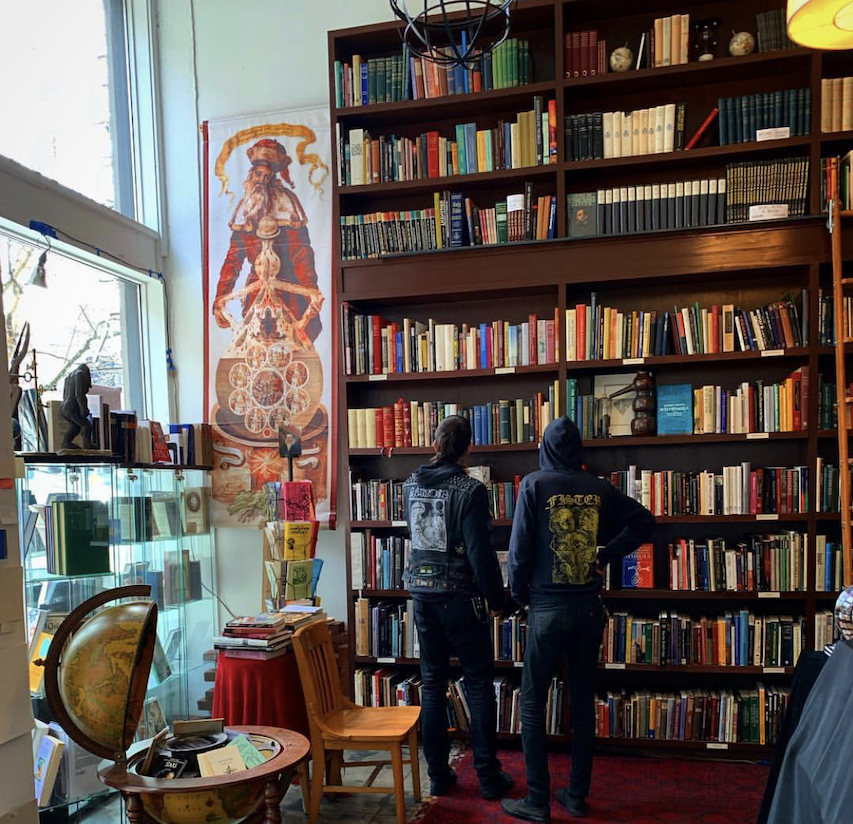 Seattle’s Mortlake & Co. is one of 110 booksellers who’ll be at the Brooklyn Antiquarian Book Fair, which includes seminars, art exhibitions and appraisal clinics for first-time collectors in all genres. Photo: Lauren Ferber/Shrine of the Serpent

William Kiesel, a scholar of the occult who has published in the genre for the past 17 years as Ouroboros Press, will have a selection of grimoires available at the book fair from his Seattle-based shop, Mortlake & Co. Among them is a vintage edition of the Red Dragon, one of the most sought-after books of this type, with the requisite invocations, sigils, and rituals, priced at $1,250. He will also be offering recently published fine press editions of grimoires, some in their first English translations, and books on alchemy and hermeticism in limited editions cloth and fine leather bindings, ranging from $40 to $400. Kiesel will co-lead the seminar, “Collecting Grimoires, Spell Books, and Witchcraft Tomesm” on Saturday September 7th at 2pm, talking about books that have sparked the resurgence of witchcraft as a form of contemporary feminism.

“Most of our customers are below 35, they’re queer, they’re women, they’re marginalized identities, people of color, people on the fringes of society, who find a home and acceptance in this circle more than others,” says Catland’s Madara. The store is usually bustling with browsing shoppers and the small garden in the back acts as a gathering place. It’s as much a community hub as it is a bookstore, offering workshops and classes for up to 60 students that regularly sell out. 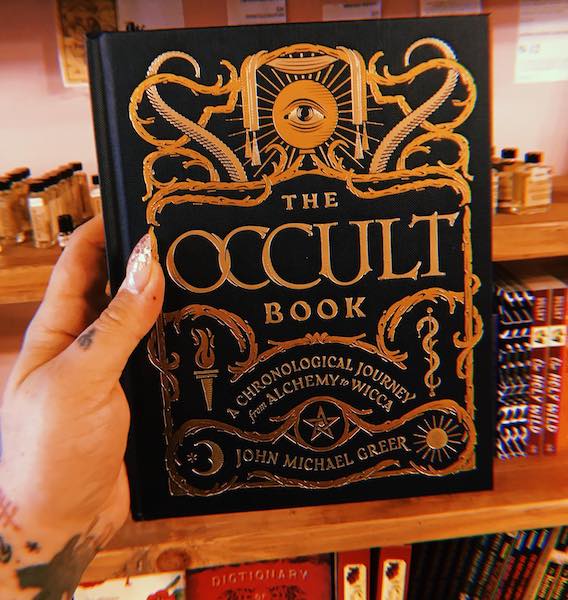 Catland was, in fact, responsible for the mass “hex-in” of Brett Kavanaugh after he was sworn in to the Supreme Court. The witch has long been a symbol of persecution, resistance, and independent female power, so it’s little wonder in our Trumpian reality that people, especially millennials, are channeling a sort of progressive occultism in their search for meaning and community and as a form of opposition to the white, male Christianity that has come to dominate our power structures. (For more on this, read Tara Isabella Burton’s brilliant essay in The American Interest.)

“Historically in periods of strife there has been a resurgence of the occult,” says Pam Grossman, a writer, curator and teacher of magical practice and history, who will be speaking alongside Kiesel at the book fair. “We are in a time when reproductive rights are under attack. Witchcraft is choosing a path that feels like a response to the oppression of marginalized people and the threat to our ecology. Witchcraft subverts the patriarchy, but it’s also about celebrating nature and connecting to the natural rhythms of the body and the seasons.”

For the many millennials who grew up without organized religion, witchcraft offers a form of alternative spiritual practice which is open, accepting, and radical. It is also self-directed, led by individual study and belief, rather than a single hegemonic power or a central dogma. In short, it is a practice that satiates a spiritual void without undermining other progressive beliefs. “There is no one book that is the be-all-and-end-all of witchcraft technique,” says Grossman. “Everyone’s path is individual and that’s really important to people today.”

The Brooklyn Antiquarian Book Fair takes place at 72 Noble Street on Saturday, September 7 from 12pm to 7pm. and Sunday, September 8 from 11am to 5pm. A weekend pass is $10 in advance or $15 at the door. For full details and to purchase tickets visit the event page.