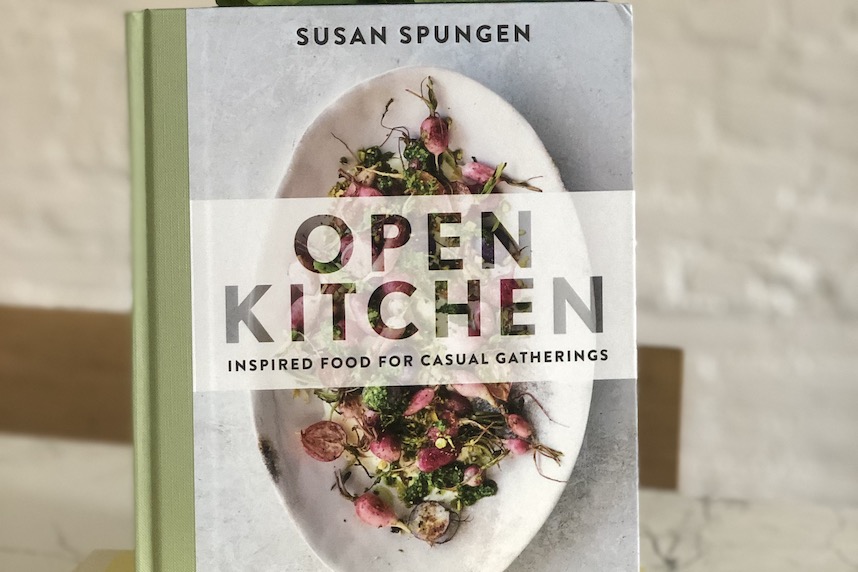 Susan Spungen’s new cookbook Open Kitchen: Inspired Food for Casual Gatherings arrived in my mailbox two weeks ago, the first day my family and I committed to isolating ourselves at home in Brooklyn to avoid the further spread of Covid-19.  As a homecook, reviewing Spungen’s stunning new cookbook seemed like the perfect project if I was going to have to start cooking three meals a day for my family.

Skimming through Open Kitchen for the first time, I started dreaming of the gatherings I would host featuring her recipes that were designed with an “elegant and a little undone philosophy” as Spungen describes, “like a messy bun on a beautiful girl or a guy’s shirttail sticking out just so.” The hardest part about cooking through her book was knowing I would have to wait at least several more weeks to share her delicious recipes with friends.

Spungen lays out her approach to cooking within the first few pages of Open Kitchen. I identified with her taking care to show readers what can be cooked ahead of time in a given recipe and what can be left to the last minute. Many of her recipes can be made completely ahead of time and are meant to be shared family-style.

In addition to having served as the founding food editor at Martha Stewart Living, Spungen is known for her food styling in popular films like Julia and Julia, It’s Complicated and Eat Pray Love. Spungen’s training started as an artist, not a chef. This is not at all surprising if you are familiar with her recent Christmas cookie spread in the New York Times, where every single dessert looked like a piece of art hanging in a museum. She treats each dish in Open Kitchen as if it were a canvas, layering both flavors and colors in surprising but unfussy ways. Spungen writes, “One of the biggest lessons I learned as an art student is knowing when to stop—when a work is ‘done’.” I found this to be true as I cooked through several of the recipes from the book. She used vegetables in ways I had never thought to before, often trying to incorporate an entire vegetable into a dish. 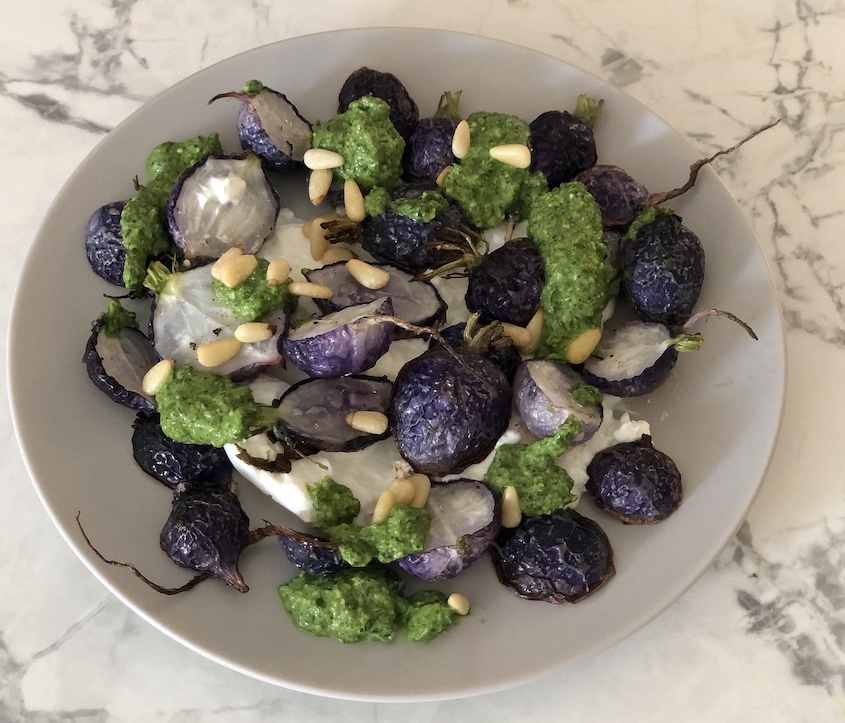 One of my favorite recipes was the one featured on the book’s cover, “Roasted Radishes with Radish Green Pesto and Crème Fraîche.” I had recently made carrot top pesto but had never thought to do the same with radish greens. The mix of purple and red radishes themselves get a slow roast, while the radish greens are blended with lemon, pistachios, cheese and oil for a surprising take on pesto. I didn’t have creme fraiche on hand so I replaced it with full fat Greek yogurt and it was still delicious. The plated dish was so beautiful it even enticed my eight-year-old daughter to become a radish lover. She’s already asked for it again.

An element I loved most about Spungen’s recipe design is that each dish included a green box with a timing tip upfront. Making it easy to plan ahead, something I appreciated even more now that cooking at home has become more hectic. Spungen’s “Caramelized Fennel with Citrus and Olives,” was also another highlight that found a creative use for an entire vegetable. For this recipe she suggested trimming and cutting the fennel a day before so it was ready to cook with, making the recipe even easier to prepare. The fennel gets braised in broth, a technique I hadn’t tried before. I loved the surprising mix of caramelized, sweet fennel with the citrus and salty olives. Again, the dish converted even my non-fennel eating daughters. 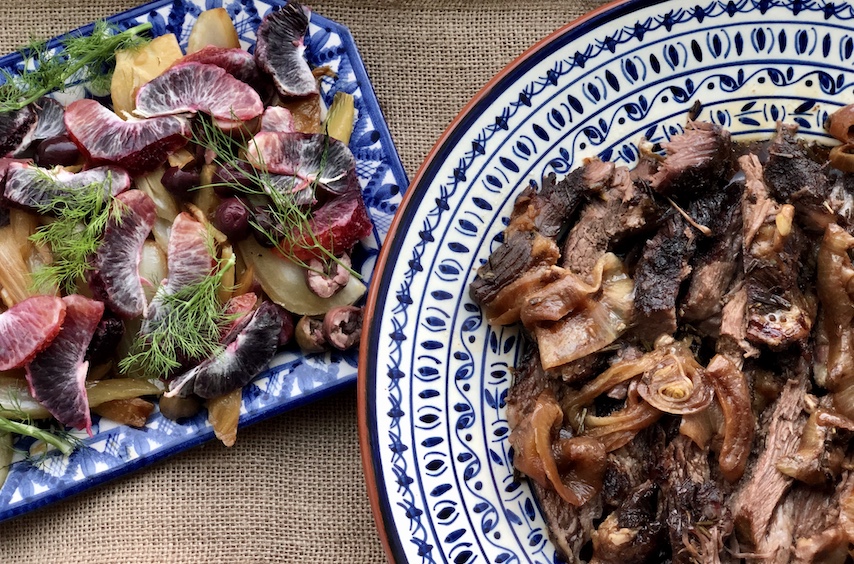 The fennel was a perfect side to Spungen’s “Slow-Roasted Lamb Shoulder with Pomegranate Molasses,” my family’s favorite of all the dishes I cooked. This one’s a show stopper, and certainly meant to be shared with a gathering of friends.  It took at least four hours in the oven, but the perfect dish to make if you’re going to be stuck at home. We ended up eating lamb two nights in a row, the second served room temperature on a bed of greens and no one complained. I’d save the lamb dish for a special occasion as it’s not a cheap cut of meat. We had no trouble calling up our local butcher Paisanos who had it ready and waiting to be picked up. You might consider splurging and serving it for the Easter or Passover holidays. Again I swapped out the pomegranate for date molasses I had in the cupboard but I bet you could use a combination of honey and balsamic vinegar if supplies are running low.

Some of the other dishes I would make any night of the week were the “Za’atar Chicken Thighs with Grilled Peach and Crispy Couscous Salad.” Since peaches aren’t in season I replaced them with dried cranberries which seemed to work just fine. I didn’t have couscous either so used farro which held up well to the other ingredients. Za’atar is one of those spices worth investing in and can always be found at Sahadi’s, another local market offering delivery and curbside pickup.

I’ve been in constant search of the perfect kale salad and I finally found it with Spungen’s Famous Kale Salad. Again, the simple dressing made with ingredients you most likely have on hand can be made well in advance and Spungen was smart to recommend prepping and slicing the kale ahead of time. She offered an infinite number of suggested variations like adding roasted carrots, butternut squash, or julienned apples, cooked wheat berries, farro or avocado mixed with different cheeses to the salad for a more complete meal. 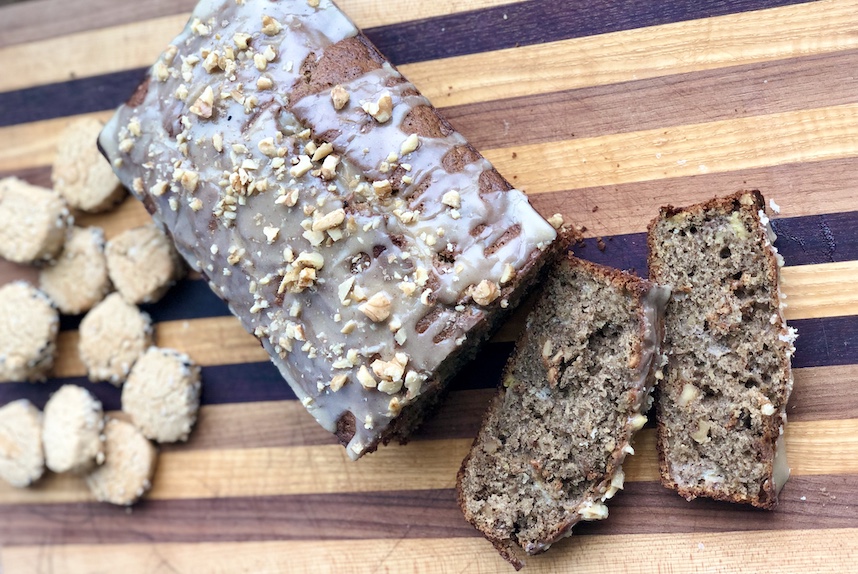 By the time I reached Spungen’s desserts my food supply was running low. Many of the recipes required ingredients that called for another trip to the store. I settled on her Banana Buckwheat Loaf and Black and White Tahini Swirl Cookies. Both recipes needed slight adjustments because I couldn’t find certain ingredients. I swapped out the buckwheat groats that topped the banana bread with toasted chopped walnuts and had to forgo the black tahini in the swirl cookies; instead I doubled the regular tahni dough as Spungen suggested. Like most all of her recipes, even the desserts seemed adaptable to the appropriate substitutions, even more important in this particular moment when we are forced to cook with what we have.

I would have loved to try Spungen’s Mezze Feast, a gorgeous two-page spread in the center of the cookbook filled with dishes like Smoky Eggplant Dip, Roasted Beets with their Greens over Labneh, and Chickpea Fritters. For now, I’ve bookmarked the page patiently waiting for the day, hopefully soon we can celebrate with a gathering of friends. Until then, you won’t regret adding Spungen’s cookbook to your collection, which you might consider ordering from a local bookstore like Books are Magic, still open for pickup or deliveries. Spungen’s cookbook has inspired me in the kitchen through these long days and weeks. Every recipe I cooked brought with it a bit of sunshine and joy to my family and I am certain it will do the same for yours. 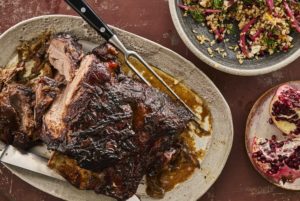 Caramelized Fennel with Citrus and OIives