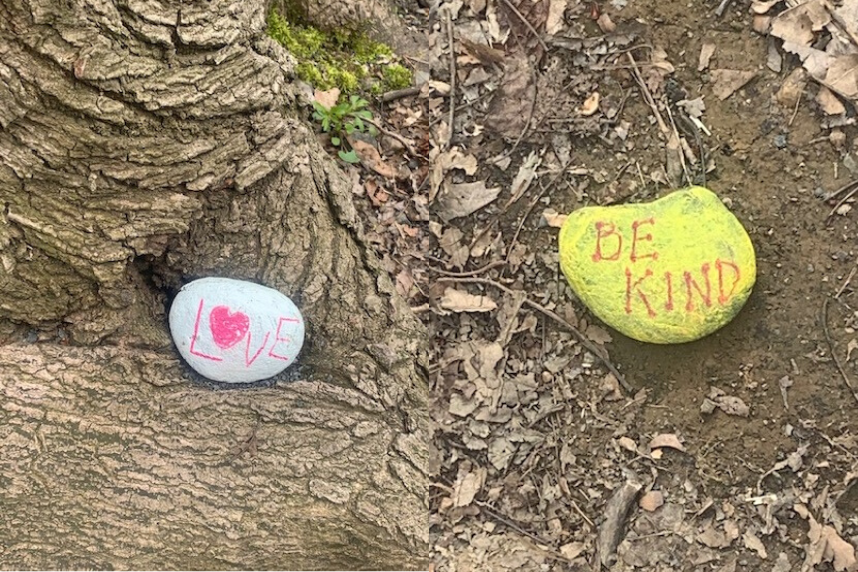 Spotted on a walk along the Hudson River: Random rocks of kindness. Photo: Kate Hooker

Happy Friday, friends, and even though it’s dreary out things are feeling a smidge more optimistic today, largely based on the encouraging news that a much larger percentage of New Yorkers have already been infected with COVID than was originally thought, and may have some level of immunity as a result. I don’t want to get hopes up, but it does feel like a break in the cloud cover, and even Trump’s latest psychotic suggestion that we treat the virus by mainlining Lysol can’t snuff out the ray of hope I’m feeling. Anyone else thinking it’s time for someone to propose a secession plan? All I’m saying is if I hear one more word about “blue state bailouts” from integrity vacuum Mitch McConnell, I might start poking around in some weird Reddit boards. While on the subject of really awful rich white men being permitted to fail up for a lifetime, I recommend this George Packer piece in The Atlantic for a lot of reasons, but particularly for its surgical excoriation of Jared Kushner and the impact he’s had on everything that’s ever been delicately placed into his soft, manicured mitts.

But how are you all holding up out there? How’s this strange cocktail of ever-fluctuating anxiety and monotony wearing on you after more than a month? Are you one of these magical pixies who is absolutely thriving right now, with your 30-day yoga challenge, sourdough starter, completed screenplay, and regular Duolingo sessions to show for it? If so, please teach us your ways! I made the mistake of looking at my Fitbit activity chart for the past 2 months and I’m basically an extra from Wall-E at this point so clearly I need some help. Maybe I’ll get some motivation this weekend, and if I do, there’s some pretty interesting stuff happening online that I thought I’d pass along to you all.

First up, C’mon Everybody is hosting a digital happy hour party featuring dance hits from the 80s, 90s, and 00s tonight, and you can follow that up with a second dance party involving Fleetwood Mac remixes starting at 7pm. Don’t worry if dancing online isn’t your thing—at the very least the music will be a nice way to spice up your now-ritualistic Friday night pizza routine, right? Alternatively, Vulture continues its Friday Movie Night series with a group-watch of American Psycho at 7pm. On Saturday afternoon, Pioneer Works is live-streaming The Universe In Verse, a poetry reading by prominent scientists, artists, writers, and musicians like Roxane Gay, Patti Smith, Neil Gaiman, Eve Ensler, Kip Thorne, Dustin Yellin, and more. Or, you can keep things simple and attend the Center for Fiction’s BYOBook reading hour, which sounds absolutely luxurious to me, a person who hasn’t been able to read a page of a book since this whole mess started. On Saturday night, SNL At Home returns, and you can pregame with Khalid’s Mostly Magical Comedy TING, a weekly musical comedy show that has moved from live shows in Brooklyn to Zoom.

Looking beyond the weekend, Littlefield is streaming its popular Drunk Science show on Wednesday night, and this installment features guests Eva Victor and Alyssa Limperis, reigning queens of the comedy viral video, among others. At the same time, Chef Preeti Mistry is teaching an Indian-inspired happy hour snacks and cocktail class hosted by Gastro Obscura that looks pretty delicious. If, like many of us, you can’t handle scheduling anything at the moment, you can sign up whenever you feel like it to watch a documentary about Hilma af Klint, the groundbreaking female artist who was the subject of a fascinating exhibit at the Guggenheim last year. Tickets directly support BAM during its closure, so you’ll be helping to sustain this essential cultural center. Or you can take your pick from this list of NYC-based movies that our Meredith Craig De Pietro published this week, and a series of reiki and meditation sessions being broadcast out of a Gowanus studio that a reader generously tipped us off to.

Despite my persistent fury at the leadership that has failed us and the selfishness of people protesting because their hair colorists don’t want to die, I’ve been feeling a lot of gratitude this week. My company, which has been hit hard by the economic downturn, had to lay off over 100 people, and I’m lucky to still have a job but even luckier to have gotten a chance to know and work with some exceptionally good, hardworking, kind, creative, and funny individuals, many of whom are already focused on how they can position themselves to be most useful in solving the societal problems that created the extraordinary situation we all find ourselves in now. Their resilience and generosity is inspiring, and a reminder that it’s a good time for everyone to reevaluate the way we spend our time and energy in this new paradigm.  All that said, I’ve been a little selfish and more introspective than usual this week, and I’m cool with it. A dear friend sending me a surprise DIY Shake Shack kit lifted me right out of a funk one night, as did a walk with another buddy to collect sea glass washed up on the Hudson River shoreline. A neighbor who is super into ASMR stuff has been teaching me all about slime, and my mom and sister and I have been working on a Golden Girls-themed puzzle every night, which we all agree is an improvement on the “staring at each other while guzzling wine” routine that had become the norm. Maybe my semi-isolation is turning me into an insufferable cheeseball, but seeing a resplendent rainbow materialize after that bizarre tornado warning was a rush, and I was moved on a recent walk in the woods to see that someone had taken the time to paint rocks bearing messages like “we may be apart but we are in this together” and “spread hope not fear” and lay them along the path. This too shall pass—all of it—and it will be because we can rely on each other to get through. Stay safe, everyone, and keep up the excellent work.