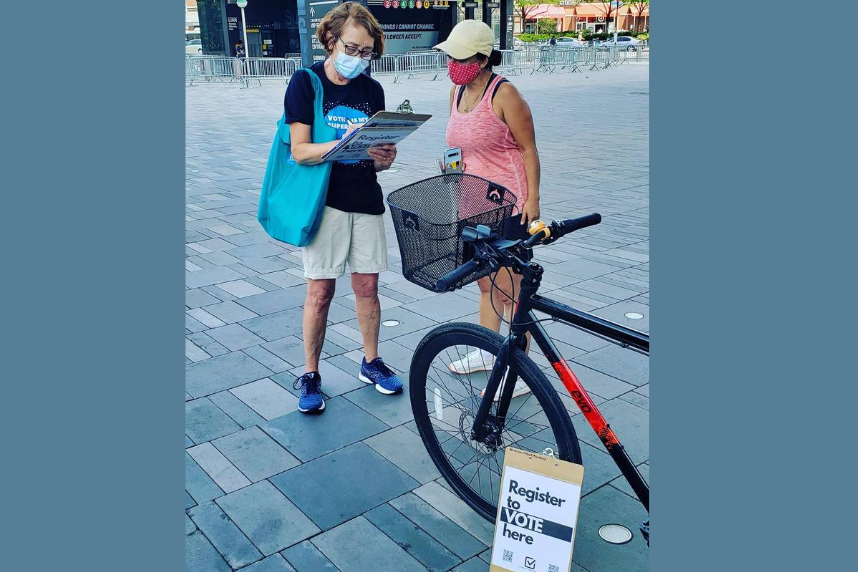 Despite early voting options offered in 39 states and D.C., and the millions of mail-in ballots that will be cast this coming November, most of us still think of Election Day as a fixed date.

“Elections are not about Election Day anymore,” said Alexandra Lowe, a member of the New York Democratic Lawyers Council, the country’s longest continuously running Democratic voter protection group, which is having a virtual fundraiser tonight. “We have this mindset that it’s Election Day, and then it’s election night, and you can stay up really late on November 3rd, and you’re going to know the results. Well, that is very likely not going to be the case this year,” she said.

Considering the handful of states that allow voting 45 days prior to Election Day, the 2020 election really begins in September. And the need to gear up for it feels even more pressing considering the national example set by New York’s June 23 primary. In some ways, this trial run with massive mail-in voting has allowed the state to iron out its kinks. This week a federal judge ruled that ballots without postmarks can now be counted, after it came to light that the Post Office often doesn’t stamp pre-paid envelopes.

J. Remy Green, one of the lawyers who first sued the state Board of Elections to reinstate the New York presidential primary on behalf of Bernie Sanders’ delegates, and then represented candidates Suraj Patel and Emily Gallagher in the postmark case, thinks New York’s botch job can be traced to its onerous laws around absentee ballots, partisan fighting over vacancies in the BOE, and general mismanagement. “I think to look at New York’s elections as a referendum on mail-in voting nationally is a bit wrong-headed,” they said. “And the reason I think that is because no other state has quite the clusterfuck of election law that we do.”

Still, between the gaslighting about voter fraud coming from the President, the rise of QAnon conspiracists, and the pandemic, there is no shortage of things that can go wrong with the 2020 election. To add to the alarm bells, this is the first presidential election in nearly 40 years that the Republican National Committee will be allowed to practice voter intimidation in the name of “ballot security.”

We encourage all of our readers to put an end to the Trump era and vote for Democrats down the line this year. Given all the uncertainties surrounding mail-in voting and the high stakes of the election, though, there is a lot to consider and many ways to help before the polls open. Here is our guide to voting and volunteering in the 2020 election.

Make sure you are registered

You have until Oct. 9 to be registered to vote in this year’s election in New York state. You can check your status here and register here.

Help other people register to vote

Voter registration in New York is down by roughly half this year because of the pandemic and the failure of our legislature to reform online voter registration. To help bring those numbers up, Brooklyn Voters Alliance offers instructions on DIY Voter Registration Kits that, once assembled, mean you can just bring a clipboard to wherever you park yourself for the day (like an actual park) and register voters. They may have some pre-assembled that you can request, and if you are new to voter registration they offer virtual training.

You can help increase turnout in other states through letter writing and phone banking, too. Local Brooklyn org Water for Grassroots is partnering with New Florida Majority to host phonebanking sessions that encourage formerly incarcerated Floridians whose voting rights were restored to register to vote. Joining a local Indivisible group or chapter of Swing Left can also make it easy to participate in a registration campaign. Vote Save America also has handy guides to adopting a battleground state to support this season and resources for volunteers new to election work and campaigning.

Volunteer to be a poll worker

There has never been a greater need for younger poll workers, who face a much lower risk of COVID than your average poll worker in their 60s, 70s or 80s. (Plus you’ll be paid for your time.) In New York state, you need to either be a resident of the county where you will be working the polls, and in NYC you need to reside within one of the 5 boroughs. Apply here if you live in the city, and here if you live elsewhere in NY.

Volunteer to be a poll watcher

A poll watcher either works inside of a polling site or outside, and helps to keep voters from being turned away unnecessarily, something that happens in all states, Red or Blue. Alexandra Lowe, who was the voter protection director for Anthony Brindisi in his 2018 race against incumbent Republican Congresswoman Claudia Tenney in NY’s 22nd Congressional District upstate, recounted the numerous students who might have been turned away because their voter registration status had been downgraded to inactive, on account of mail sent to their dorms that was returned when they were home for the summer. All they needed to do in that case was submit an affidavit ballot. Name changes after marriage and transgender people can also face a similar roadblock that is easily cleared away by signing your old and new names before casting your ballot, but you need knowledgeable poll workers and watchers to ensure every vote counts.

In states with Voter ID laws in place, it’s especially helpful to have someone outside encouraging those who forget their IDs to get it and come back, as Lowe did in 2016 in Florida.

“We would say look, if you don’t have it, please go home and get it, it’s really important…I explained that some elections are won by 1, 2 or 3 votes per precinct.”

To register to be a poll watcher In New York or battleground states, the NYDLC is collecting names to mobilize teams across the country. Sign up here.

Volunteer for a voter education hotline

Given how many people will be voting by mail this election, there will be a great need to staff voter hotlines, to answer the myriad questions voters will have this fall.

To be added to a database of hotline volunteers for New York and battleground states, use the same NYDLC link: https://www.nydlc.org/join_2020

Vote Save America is promoting two funds to donate to as well. Every Vote Counts helps communities of color who are typically disenfranchised and the Get Mitch or Die Trying fund pours money into flipping the Senate and stripping Mitch McConnell of his Senate Majority Leader role.

We often equate AOC with the face of change in Congress, says Lowe, but the real change happened when voters flipped historically Republican seats and elected Democrats like Max Rose and Anthony Delgato to give Democrats the majority in the House. The Democratic candidates in local Congressional races to support this cycle include Jackie Gordon in Nassau County and Nancy Goroff in Suffolk; both are running against Republican Congressmen.

Vote early, in person, if you can

Given how many fewer polling sites there will be this election because of the pandemic, and knowing the risk of another counting fiasco with mail-in ballots, Lowe recommends voting early, in person, if you are young and/or healthy and feel comfortable doing so.

If you do mail in your vote, plan to do so AT LEAST 1 week in advance

Not everyone has the ability to vote in person, though. J. Remy Green is immunocompromised and will be voting by mail this fall, but they recommend being vigilant about mailing it in advance. “If you’re going to vote absentee you should really try to get it in the mailbox at least a week in advance. That’s the guidance the post office itself gives.”

Build in enough time to request an absentee ballot, too. (You do have to be a registered voter, and currently, concern of contracting COVID is not reason enough to apply for one, though that will likely change.) The application is online at elections.ny.gov.

You can also pick up an absentee ballot in person at your local Board of Elections site, and drop it off there, too. (These are the locations in the city, others can be found on your county board of elections page.) But if you are going to this trouble, why not just vote early, in person?

Over 80,000 absentee ballots were tossed out because of random errors—a stray mark here, a forgotten signature there, putting two ballots into one envelope, taping your envelope, not sealing it enough. Take the time to prepare it with care.

Even with all of these mobilization efforts and precautionary measures, it’s realistic to expect that the election won’t be decided in a day. It could be a week, or two, or more, especially since the president has already cast doubt on the legitimacy of mail-in voting and stated his intentions not to concede.

“The narrative here should be, why wouldn’t you concede once it’s mathematically impossible?,” asked Green. “That’s the question that should be posed to Trump.”