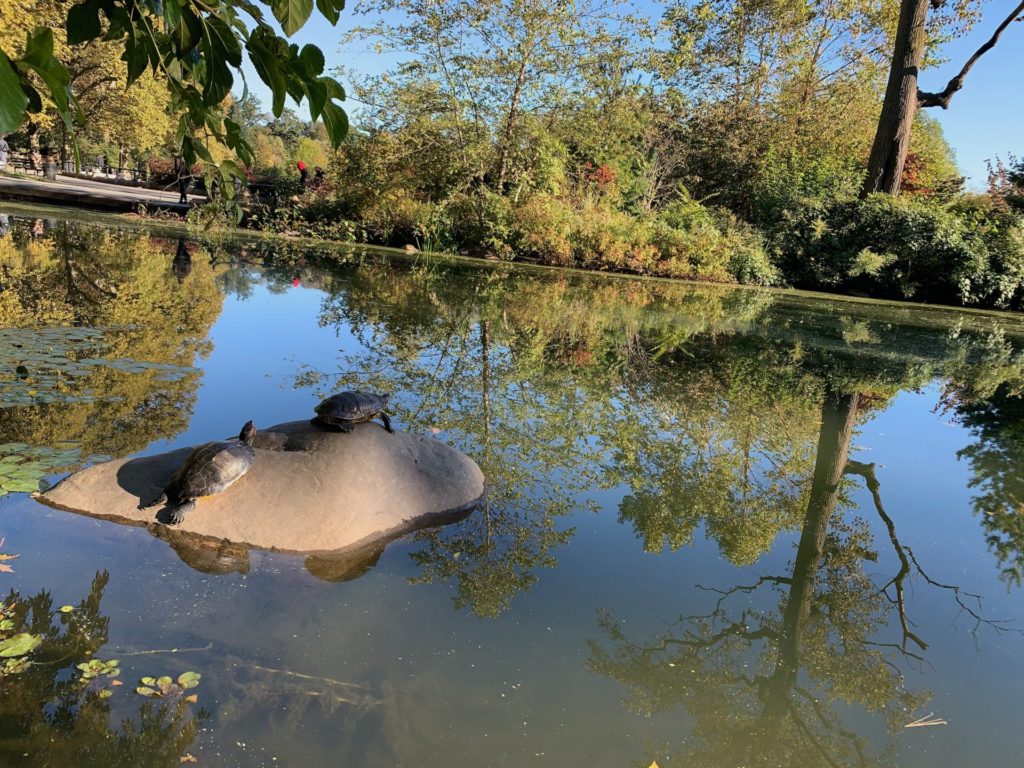 Prospect Park turtles may enjoy sunbathing in Brooklyn, but this is not their natural habitat. Photo: Rob Blatt

• Recording a banjo album inside a cave? That’s a level of Brooklyn that’s usually reserved for Bushwick but meet Nora Brown, who just released her first album “Cinnamon Tree” in a cheese cave in Crown Heights. (Allison Rapp for Brooklyn Magazine) [Related: Brooklyn’s underground is alive and well at Crown Finish Caves]

• There are no more late fees at NYC’s public libraries. (Jen Carlson for Gothamist)

• This is what the first OMNY card will look like for people not using contactless payments on a personal device. The cards are only available at places like CVS or Duane Reade in the gift card area. (Christopher Bonanos for Curbed)

• The best restaurants in Windsor Terrace. (Carina Finn Koeppicus for The Infatuation)

• Interview: Michael Kinnan is performing in Never Let Go at The Brick in Williamsburg, a one man theatrical realization of Titanic. How does the portrait scene happen? (Billy McEntee for Greenpointers)

• How did turtles get into Prospect Park? The red-eared sliders’ natural habitat is mostly in the South near the Mississippi River Delta and are technically an invasive species. Most of them are abandoned pets or descendants of abandoned pets. If you cannot care for your turtle, you can surrender it to the Animal Care Centers of NYC or the Sean Casey Animal Rescue. (Ben Brachfeld for Brooklyn Paper)

• As time marches on with the Crown Heights armory, we’re going to discovery over and over how the city agreed to a bad deal and trumpeted about how it was doing great work for the community. It’s a complete embarrassment and unfortunately for Laurie Cumbo, this is her legacy. (Gabriel Sandoval for The City)

• After an FBI raid at his home and at the headquarters of the Sergeants Benevolent Association, the SBA’s President Ed Mullins resigned as president after the board asked him to. He’s called NYC’s public housing “dens of crime and violence” where “Blacks will continue to attack and ambush us forever” and said Ferguson, MO was “a lie” — and that’s just the last few years of his 19-year stint. Good riddance. (William K. Rashbaum and Michael Gold for NY Times)

• A tour of Baseera Khan’s new Brooklyn Museum solo show I am an Archive by Baseera Khan. (Mags Chmielarczyk for Brooklyn Magazine)

• The 24 best pizza places in NYC, ranked. A suspect list in that a Jersey City pizzeria sits at #2, above Di Fara, L&B, Paulie Gee’s, and more. (The Infatuation)