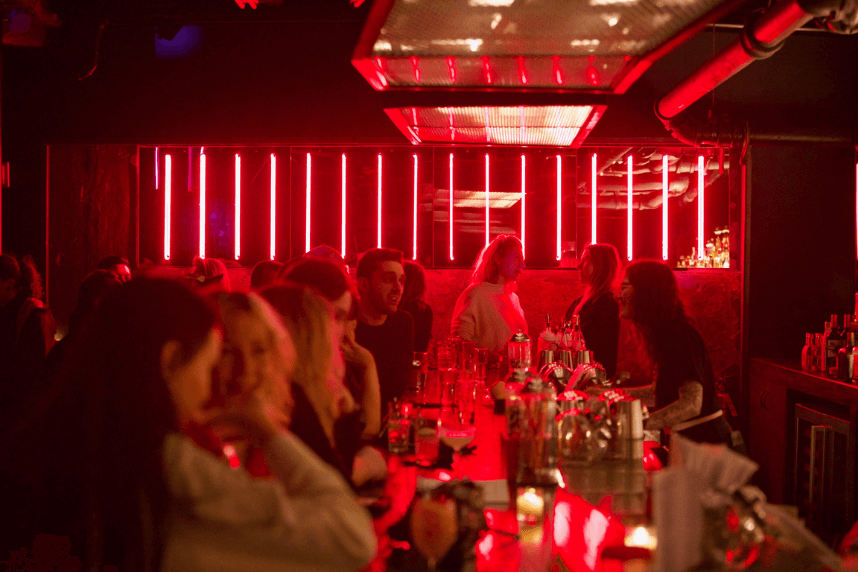 Trust us, everyone is going out in Midtown, you just have to know where to look. (Hint: a hidden cocktail bar in a subway concourse.) Photo: Adrien Gallo/ Nothing Really Matters

It’s another work week in Midtown, where a sea of empty cubicles and aimless street meat vendors are still waiting for the professionals to come back to the office. While much has been said about all the empty storefronts and the lack of tourists, entrepreneurs have been quietly taking advantage of the high vacancy rates and making Midtown, against all odds, an actual destination.

“We are rebuilding Midtown/Times Square all over again,” says Adrien Gallo, owner of the speakeasy cocktail bar Nothing Really Matters, at the Downtown 1 station at 50th Street. After years of saying Midtown was dead, the neighborhood suddenly feels alive…and dare we say, hip?

“It sure doesn’t feel like a ghost town to us!” says Julian Brizzi, owner of Brooklyn favorites, Rucola, Grand Army, and Nicky’s Unisex, and now a partner at Pebble Bar at Rockefeller Center. It joins a slew of other buzzy bars and shops that have opened nearby, many with Brooklyn roots. “With Lodi, Other Half, and Rough Trade Records all a stone’s throw from us and recently opened, there’s a lot of energy in our neighborhood.”

Many of the openings commemorate the neighborhood’s legacy by restoring historic locations and creating spaces as an homage to what came before. The new roller rink at Rockefeller Center, for instance, is an echo of its 1940s past. (For a refresher course on Midtown’s wild and influential history, peruse the Instagram @midtownofthemind, a glittering celeb-filed tour.) In a city that is always being steamrolled to make room for the newest skyscraper, the nostalgia of this area feels fresh. “Rockefeller Center is the only place on earth with enough history, culture, and action for a place like Pebble Bar to make sense,” says Brizzi.

After avoiding Midtown for the creepy Elmos and herds of out-of-town tourists, it’s time to give it another chance. You can go roller skating or record shopping, eat oysters in a four-floor townhouse, and then pull a late-nighter in a subway speakeasy. Spend all day or all night — we’ve rounded up the coolest pockets in the neighborhood that are more Dimes Square than Times Square. 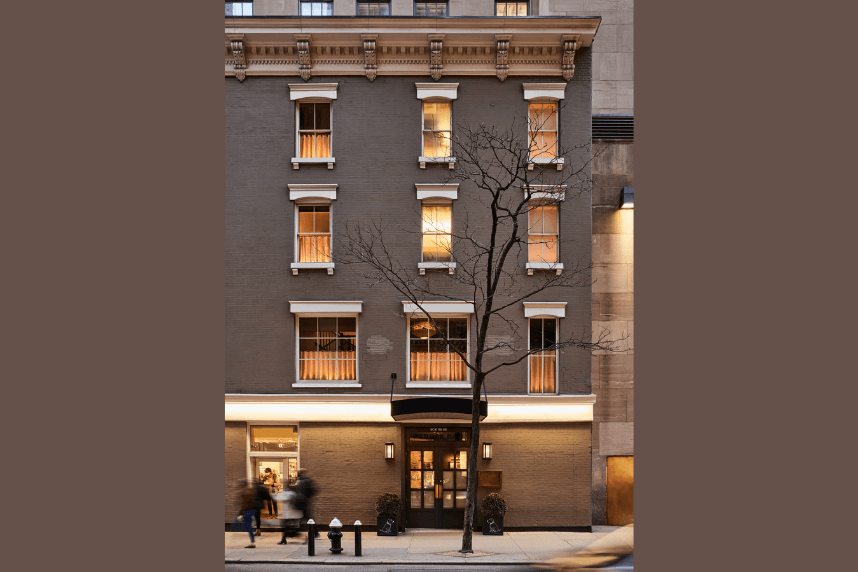 Behind this tony exterior, you just might catch a glimpse of Pete Davidson (an investor) or find Johnny Carson’s private entrance. Photo: Nicole Franzen/ Pebble Bar

The opening of Pebble Bar would be a major event no matter what neighborhood it was in. The fact that it’s in Midtown makes it that much more exciting. This four-floor townhouse bar/ restaurant is backed by top-tier restauranteurs including Julian Brizzi, Noah Bernamoff and Matt Kliegman, and a roster of celebrity investors: Nicholas Braun (Greg from Succession), and SNL’s Pete Davidson. Although seemingly part of a bigger trend, Bernamoff and Kliegman had a pre-pandemic relationship with the landlords of the space through Black Seed Bagels, and it was been in the works a year before the pandemic. The historic space was formerly a bar named Hurley’s (1892-2000) and according to Brizzi, “The elevator is haunted! Just kidding, but every nook and cranny is packed with history.” Johnny Carson had a secret entrance through Rockefeller Center, and Henry Kissinger was asked to leave for bad behavior while John Belushi was also there (behaving himself). With that kind of legacy, the bar is sure to attract out-of-towners and the most New York of city residents. 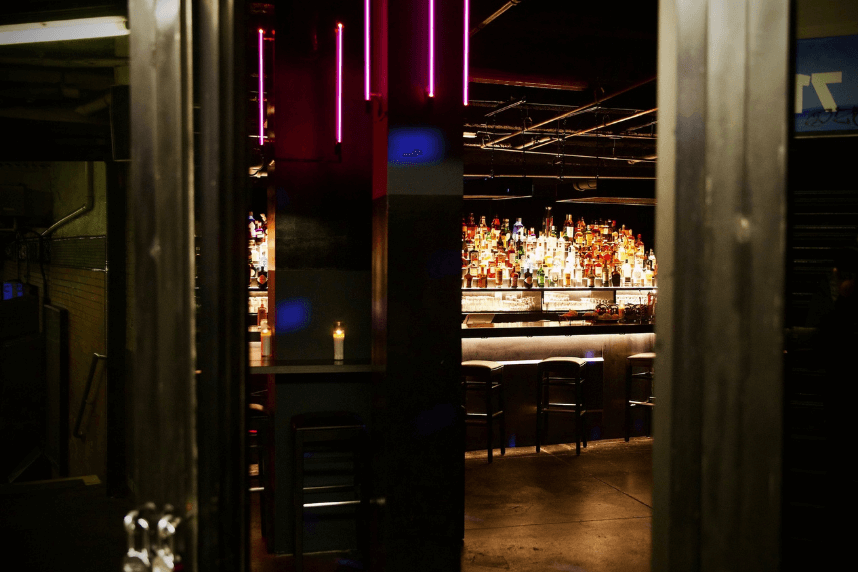 Imagine your surprise when, underneath Broadway in the subway concourse, you stumble upon this classy cocktail bar. Photo: Adrien Gallo/ Nothing Really Matters

“When I found this space (which was Duane Reade’s storage) it was an empty white box with uneven floors and a big hole in the corner!” says Adrien Gallo, owner of Nothing Really Matters. It’s hard to believe now with its uber-chic decor, reminiscent of Alice tumbling through the subway station and stumbling upon a speakeasy owned by the Queen of Hearts. Unlike Siberia Bar, the previous subway watering hole in the same concourse that closed in 2007 and was called the city’s “most notorious, dirty, and dangerous dive bar,” Nothing Really Matters is more welcoming with soft red lighting and unique cocktails that are the antitheses of the usual Midtown vibe. “We are for all,” says Gallo, “and we truly get a slice of the world coming in, from the commuter crew looking for a great cocktail that happened to stumble upon us, to pre-theatre, then post-theatre cast and crew, neighborhood locals, and the industry friends and family coming to Midtown to check us out.” Order a MonoLoco rum cocktail (or a non-alcoholic or low-ABV cocktail), relax into the space, and eventually, nothing really will matter anymore. 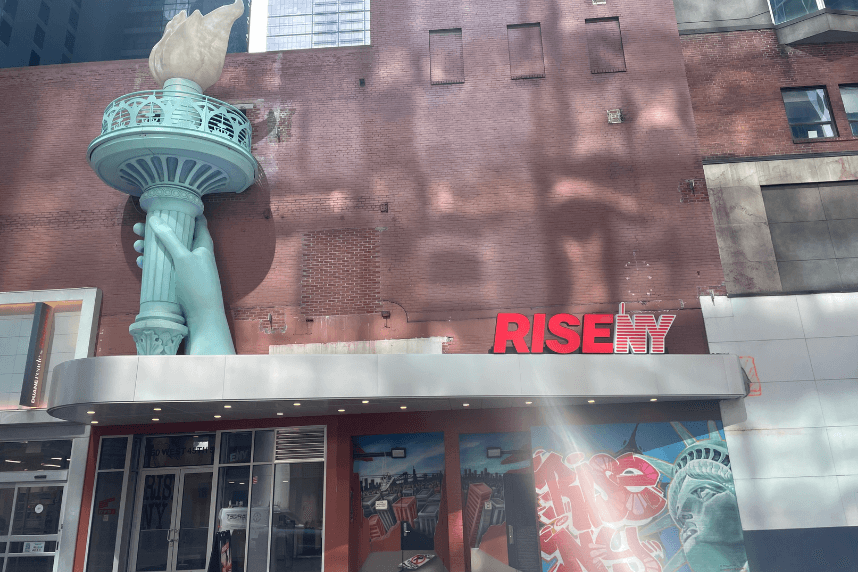 New York’s newest attraction is a museum and Universal Studios-style ride that uses cutting-edge technology to make you feel like you’re flying over the city. Yes, you would 100% be right that this sounds like something made for tourists, but where you’d be wrong is that it is actually fun for residents as well. The creators of RiseNY, Running Subway, have partnered with other museums to co-curate exhibits that highlight the inventions that made New York the city it is today. (For instance, the esteemed Valerie Steele of The Museum at FIT curated the fashion exhibit, which starts with the invention of the sewing machine and the Triangle Shirt Factory fire.) The exhibits are interactive with plentiful photo opps (take a picture on the set of The Tonight Show) and multi-sensory experiences (ring the New York Stock Exchange bell.) The experience is a love letter to the city, and in this day and age, it feels well deserved. 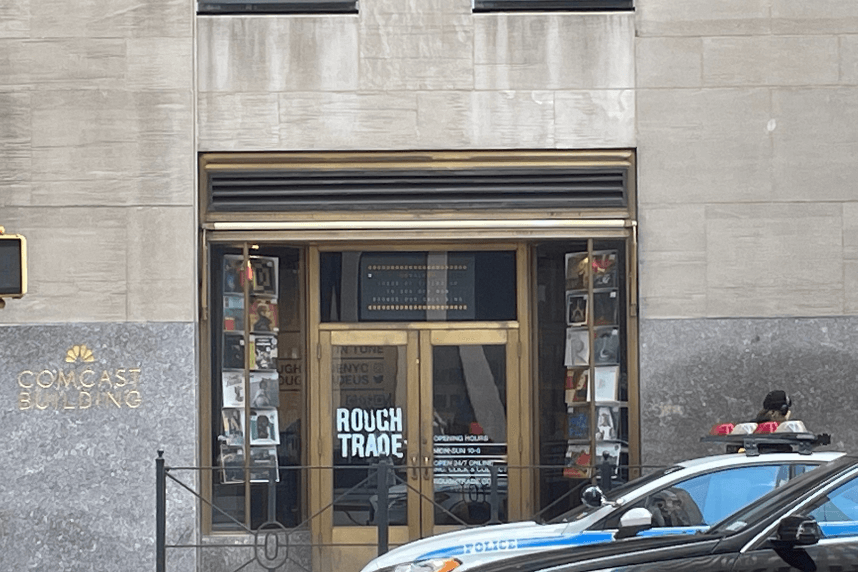 When Rough Trade closed shop in Williamsburg, it was a sad day for music lovers, and also a shock to hear that the record shop would move into a smaller space in Midtown, in a former shoe store sandwiched between The Tonight Show and the subway station. But its opening in the neighborhood continues its legacy of housing storied record and music shops, from the sheet music emporium Colony Records in the Brill building, to Rock and Soul near Penn Station. Since it opened last year, it’s continued its live events, now coordinated with Rockefeller Center, and has a rabid fan base that’s followed them to Midtown for the selection of new tracks. 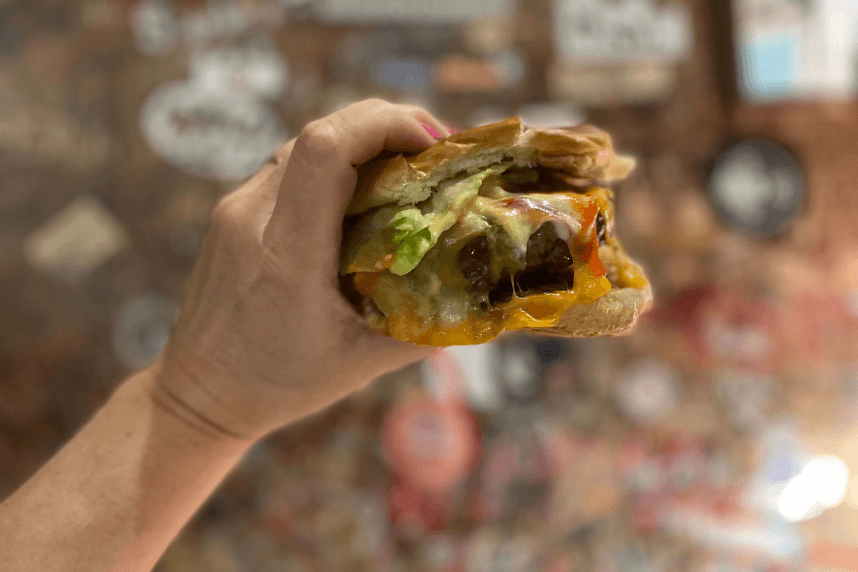 The recently re-opened Burger Joint has the same grungy feel and the best burgers around. Photo: Meredith Craig de Pietro

This location of Burger Joint just recently reopened inside the Thompson Hotel, and everything, including the hidden location behind a red curtain, the delectable burgers, the graffitied walls, and the cramped seating is exactly the same. The only thing that’s different is that there’s no more scrambling for cash; they finally accept cards and Apple pay. Otherwise, be prepared to fight to the death for a table to enjoy one of the best burgers in the city. (If you’re in Brooklyn, stop by the Industry City location for a more low-key experience.) 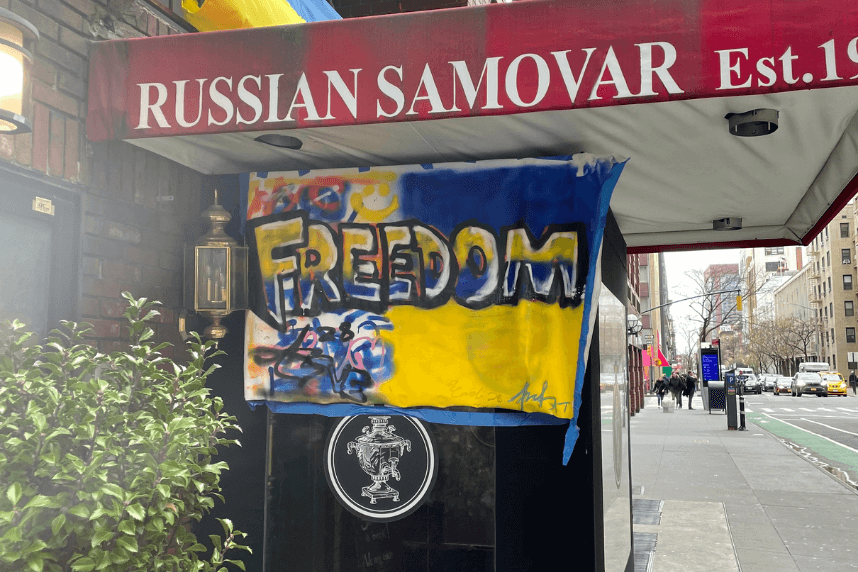 After being unfairly targeted and boycotted, Russian Samovar wants you to know they stand by Ukraine. Stop by for a song on the piano or a stiff vodka. Photo: Meredith Craig de Pietro

Russian Samovar, a restaurant and piano bar since 1986, has been recently rediscovered by a younger clientele looking for a classic experience. But since the war in Ukraine, this restaurant (and many similar restaurants in the city) have been unfairly targeted and boycotted based on its name alone. In reality, the husband and wife owners hail from Ukraine and Russia, respectively, and the staff is predominantly Ukrainian. A recent New York Times article noted that reservations are down 60 percent; now’s the time to support them. 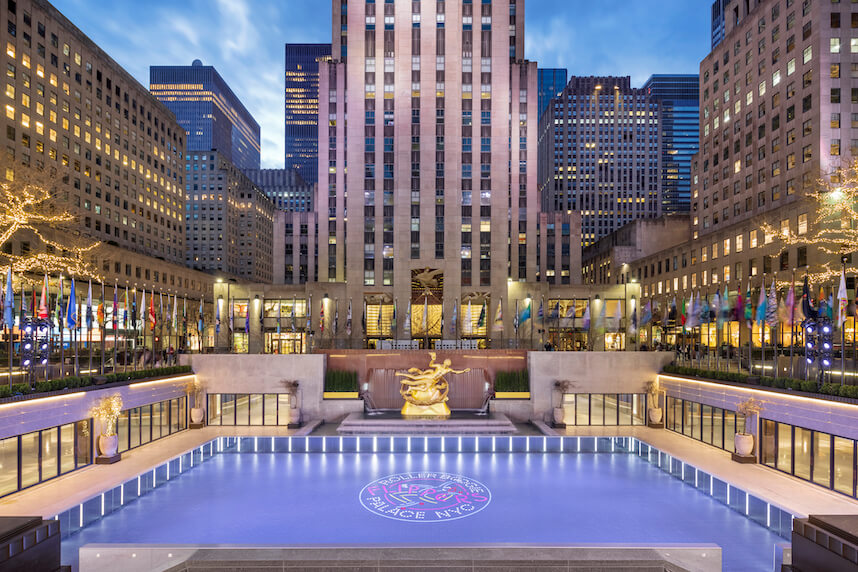 If you’ve always dreamed of ice skating at Rockefeller Center but would prefer the weather warmer and the blades to be replaced with wheels, then you are in luck. On Friday, April 15th, the infamous ice skating rink became Flipper’s Roller Boogie Palace, owned and operated by a historic Los Angeles-based family. Roller skating became hot during the pandemic as a fun way to get outside, but it’s not just trendy. NYC has a history of supporting roller skating and still has popular rinks around the city, but this will be the first one in Rockefeller Center since 1940. Cue the disco and tighten your laces!

Other Half Brewing, 600 Fifth Avenue

For those that believe that the craft brewery vibes can only be found Upstate or in Brooklyn, the opening of Other Half Brewing in Rockefeller Center will be a shock to the system. The owners still brew their beer in Brooklyn, but their taprooms are expanding. (They also have locations in the Finger Lakes, Philly and D.C.) The brand of Brooklyn has always been scaleable, so why not to Midtown?