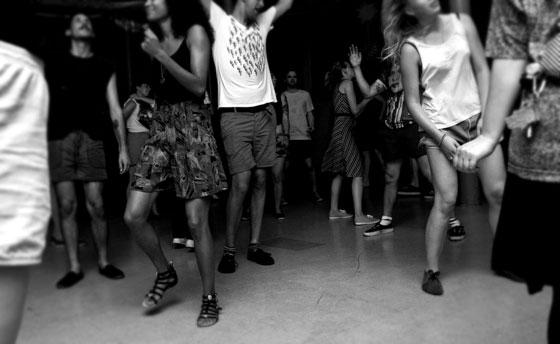 Dancing in the dark at No Lights No Lycra.

A wallflower scene, reminiscent of many a middle school dance, played out at Greenpoint’s Church of the Messiah Hall on a recent Tuesday night. Dancers sat aloof in folding chairs against the walls of an otherwise empty space, as two Australians untangled chords for an amp and set of speakers on the opposite side of the dance floor. Until the lights went out, that was. Seconds after being plunged into utter darkness, save for a starburst of laser light casting a constellation of green dots around the room, outlines of a few dozen dancers came into focus as they took to the floor. This 90-minute, inhibitions-be-damned dance party in the dark is an international phenomenon known as No Lights No Lycra.

The concept, created in Melbourne, Australia by dance students Alice Glenn and Heidi Barrett in June 2009, is simple: Create an environment where people can dance without inhibition. “It made perfect sense to leave the lights turned off,” Barrett explained via email from Amsterdam, where she’s currently scouting spaces for a new No Lights chapter.

Since turning the lights out for the first time almost two years ago, Glenn and Barrett’s vision has spread around the globe. There are now No Lights chapters in Melbourne, Sydney and Horsham, Victoria, San Francisco, Atlanta, Glasgow and Greenpoint, with new outposts opening soon in Amsterdam, London and Berlin. Glenn and Barrett keep in close contact with all current chapters to keep No Lights from “landing in the wrong hands and losing its purpose and meaning,” Glenn said. Laura O’Neill, who started the Brooklyn No Lights last April, also happens to be Glenn’s best friend.

After attending a handful of No Lights events while on holiday in Australia, O’Neill knew it was something she wanted to continue when she came back stateside. “New York is not the easiest place to live, especially with how long and cold the winter is,” she said. “I think something like this is pretty amazing for seasonal depression.” It also offers an antithesis to the seen-and-be-seen nature of New York City nightlife.

“I think some people who are real scenesters, they either come here and they totally get it or they feel uncomfortable,” O’Neill said. “They’re not so much in to this kind of thing.”

“This thing” is a drug- and alcohol-free dance jam in the dark that starts every Tuesday night (though not this week) around 8:15 p.m. in Greenpoint. For $5 revelers lose themselves in a 90-minute mélange of music ranging from Queen to Vampire Weekend.

“We have this word in Australia–daggy–which means like dorky,” O’Neill says. “No Lights No Lycra’s playlist should be kind of daggy. It shouldn’t be taken too seriously.”

With its heart-palpitating beats, No Lights lies somewhere between a workout and a night out. Think scenes from Flashdance sans spandex leotards. Barrett sums it up best saying, “In our society, dance has become something that is either studied formally, saved for the stage or for the dance floors of crowded and alcohol fueled nightclubs. With No Lights No Lycra, we hope to provide an alternative, a place where dance is no longer something to be scared of, but a space where dance becomes the everyday language.”