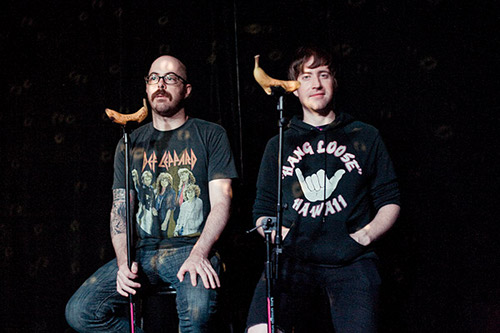 Every last Sunday of the month, two local comedians, Jim VanBlaricum and Jim Crocamo, host a free show called the Crappy Cinema Council at Coco66 in Greenpoint. The concept takes the typical New York variety show to new heights: The two Jims stream clips of really shitty movies and offer hilarious running commentary in between sets of comedians who aren’t at all crappy. (A few of the “name” comedians who’ve appeared in the past include Hannibal Buress and Dan St. Germain.)

At the January show, I was lucky enough to hear the hilarious Sean O’Connor, just one of many awesome comedians there that night, and to revisit the days when I had “You on Kazoo” on VHS. While those may have not been my most proud moments, I realized how funny the clip is two decades later (and how thankful I am that I have not seen a kazoo since).

This week’s theme is “Action Movies,” and features the superbly funny comedians Greg Barris, Jamie Lee, Morgan Venticinque, Robert Dean, and Kurt Braunohler (who just won Best Male Stand-Up Comedian at the 2011 ECNY Awards). I interviewed one of the hosts and awful movie enthusiast, Jim VanBlaricum, for a little insight into his crappy comedy show.

How do you and Jim C. draw inspiration for themes and clips?
We’ve both been into shitty movies since we were kids–it’s actually what we first bonded over when we met 5 years ago–so we each have our own collections of crap to draw from. We’ll use stuff we remember seeing on late night cable TV back in the 80s/90s, VHS tapes we find at junk stores, stuff we run across on YouTube, stuff people have suggested to us, whatever. Also a few months ago Jim spent a couple of days going on Netflix, looking in the children’s section (our theme that month was kids’ movies), sorting by “lowest rated” and then he watched whatever was rated worst. Or sometimes I’ll rate a really shitty movie 5 stars and see what Netflix suggests based on that recommendation and then watch that. “You liked Air Bud: Seventh Inning Fetch? Here, check out Karate Dog”. Also, we both work corporate desk jobs so we’re on gchat a lot during the day, so as we get a few weeks out from a show we’ll IM each other about what the theme should be, what clips we could show, etc. It’s a pretty haphazard process and usually thrown together kind of last-minute, because we are both very, very lazy.

How long has the show been running for?
We started last April. Our one-year anniversary show is next month! Our first show was sort of a disaster-still a fun show and had a good crowd, the comics had fun (I think), but we had all sorts of technical problems. We ended up having to show the clips on my laptop, sitting on top of a stool on the stage, hooked into the sound system. The comics did their sets from the floor rather than on the stage. The skylight in the room wasn’t covered and our start time back then was 5pm, so we basically did the show in super bright sunlight. We’re bringing back the same lineup of comics from our first show for the 4/24 Anniversary Show as a kind of, “Hey check it out, we have, like, a real show now!” gesture.

What makes your show WAY better than others?
I don’t know about “way better” than other shows, haha, but I do think it’s a pretty good show. The crappy movie clips are funny and take some of the burden off of us as hosts, and it keeps the audience engaged and laughing and stuff between the comedians’ sets. The comics like it because they’ve all heard everyone’s jokes a million times just from going to so many shows, so the crappy clips help keep them interested in the show…rather than just kind of hanging out in the back, being bored and waiting for their set, they can watch the clips. And our crowd isn’t made up of typical comedy fans, meaning they’re not people who go to shows every week and have seen the comics a bunch of times before, so they’re always really enthusiastic about the show and stoked to see the comics and clips. The response from the comedy community has been really positive, it’s been great to hear people who we respect and think are very funny say nice things about our dumb little show.

Leave a Reply to Kate