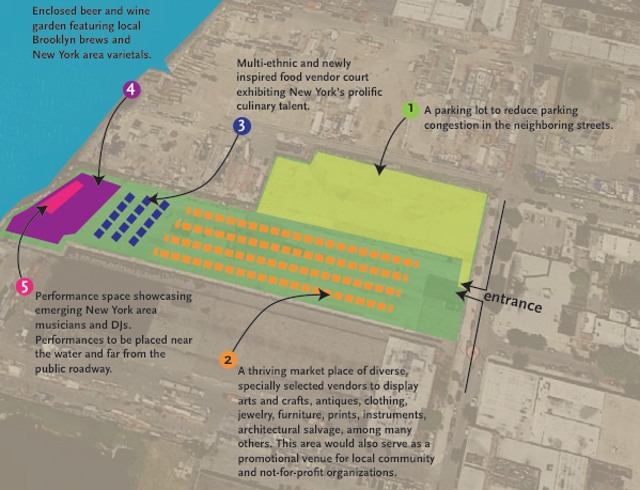 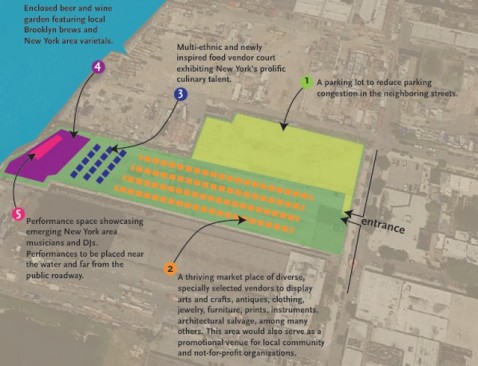 Update: Well, it looks like we’ve made a moot argument here, Greenpointers is reporting that the bazaar is not going to open this summer in light of all the sturm and drang. We’re bummed on behalf of the organizers and all the small businesses that were planning on participating. Maybe a couple of one-off events to test the waters for 2012?

A few weeks ago we wrote about the Night Bazaar, a proposed market, beer and wine garden and venue that is planning to set up shop along the Greenpoint waterfront the summer. A groundswell of anti-bazaar sentiment has been growing, and neighbors are complaining about potential noise, drunken rowdiness and general mayhem. Two public meeting to discuss the market have been held this week (New York Shitty posted video and a recap from last night’s meeting at Red Star, which was put together by the Greenpoint Business Alliance) and both featured very vocal opponents. According to The Brooklyn Paper, the Bazaar hasn’t yet gotten liquor permits or a sound permit from the 94th Precinct, and as veteran event organizers, we can tell you, that with so much uproar and so little time before the proposed opening date, things are not looking good.

We have to wonder though, how much marketing and al fresco boozing can New Yorkers possibly do?

The Flea opens in Williamsburg this Sunday at the Edge condo development, and a dedicated foodie Flea will start on Saturdays later this spring. There’s the DeKalb Market, the shipping container extravaganza coming to Downtown Brooklyn and the new Downtown Flea Market at Flatbush and Hanson Place. On the venue and drinking tip, the concerts at East River Park, are in between the new Flea location and the proposed Bazaar at 27 West Street. Last summer the ticketed shows were generally on Friday and Saturday nights, many of which sold out, but Jelly NYC offered free shows on Sunday afternoons, which were not particularly well attended.

We love outdoor activities, creative event planning and weird markets probably more than most people, but we’re a little dubious about the logistics for the continued success of these weekly summer blowouts. It’s one thing for the Flea, which is by nature, a passing through sort of situation–you go, you browse, you eat, you move on to air-conditioned pastures–but when you’re talking about trying to get several hundred people to show up and hang out for several hours, you have to also make them comfortable. Unless you have Faith No More on stage, then comfort is of no importance.

West Street is a 10 minute walk from the Nassau G train. In 90-degree weather that’s a pretty sticky proposition for a place you’ll show up then need to buy water and use a portapotty. Of course, there’s the Manhattan skyline and breeze off the East River, and the new ferry from Manhattan dock just a few blocks away–those are strong factors supporting the market’s success. But, then again, what about bike parking? What happens when a crazy New York summer thunderstorm rolls in? Where do all those people go? We ended up huddled under an awning on Kent Street with several thousand teenagers from New Jersey last summer when a tornado watch went into effect and a massive thunderstorm interrupted the Modest Mouse show at East River Park–it was actually really scary from a crowd control perspective.

The Night Bazaar sounds cool, it just seems like a logistical nightmare, and something we’d check out a couple times over the summer, not attend weekly. Are these thousands of people that opponents of the market are so afraid of really going to show up and, crucially, continue showing up? We’re big fans of outdoor drinking, but we gotta say, we strongly favor indoor plumbing.