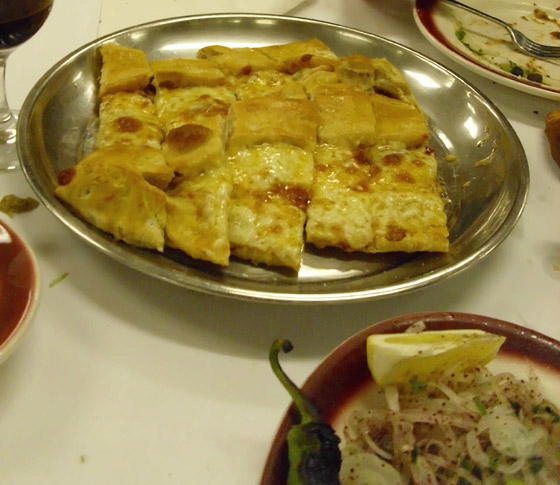 Turkish cuisine is a little bit nomadic, a little bit Mediterranean and a whole lot of yogurt. In fact, the very word for said cultured dairystuff is Turkish, just like baklava and dolma–which comes from the Turkish verb meaning “to stuff.” Much of the cuisine became familiar to American palates by way of Greek, Arab and Armenian immigrants (Colombo yogurt was started by Armenians Sarkis and Rose Colombosian).

Brooklyn’s Turkish community is located in the southern reaches of the borough. There are Turkish restaurants and shops in Brighton Beach and Sheepshead Bay but you’re most likely to hear Turkish spoken on the street in Midwood. Home to Brooklyn College and painted Victorian houses, the neighborhood is easily accessible via the B, Q and F trains. Kings Highway and Coney Island Avenue are among its main thoroughfares; the Kings Highway B/Q stop is a good starting point to explore the Turkish community.

The Turks, for their part, use yogurt as liberally as mustard or ketchup—atop pasta, roast meats and vegetables alike. Casual fans of Turkish cuisine may be well acquainted with savory, spicy shish kebabs–another Turkish word. But these skewered treats hardly scratch the surface of the country’s cuisine. Turkey, straddling two continents and 81 provinces, is a hodgepodge of flavors.

Piquant grilled meats rule the scene in the country’s southeast, while the Aegean coastal region is heavy on the cold meze featuring fresh produce soaked in olive oil. Even less well known to fans of Turkish food are the Black Sea’s fish dishes and long, cheese-topped flatbread pizzas known as pide, and central Anatolian fare, such as kaymak–clotted cream made from the milk of water buffaloes fed on poppies. 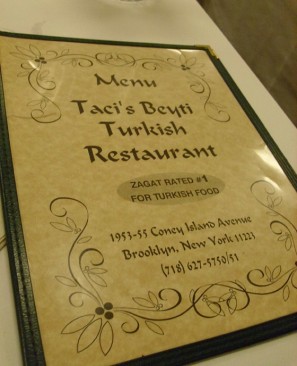 The beginning of your Turkish feast...

Just don’t go to a Turkish restaurant and eat falafel, which is not a Turkish dish at all—it’s actually nigh impossible to find in the country outside of snooty Istanbul restaurants catering to expats and moneyed Turks who often developed a taste for it while studying abroad in the U.S. or U.K.

A typical Turkish meal in a restaurant will start off with a platter of mezes (appetizers) brought to the table, if not preceded by soup, salad and copious amounts of bread; an entrée, such as kebab or pide; dessert and plenty of tea. Contrary to Western belief, Turkish coffee is not typically consumed until mid-afternoon. “Kahvaltı,” the Turkish word for breakfast, literally means “before coffee.”

Beyaz peynir, white sheep’s milk cheese paired with honeydew melon, is a traditional summertime refreshment and is often served with the national tipple, rakı, an anisette drink. On a recent steamy weekend day, that exact spread was the choice for two Turkish gentlemen dining at Taci’s. Seated elsewhere in the dining room was a Russian family with a bottle of Smirnoff at their table, as well as a rowdy group of  twentysomethings chucking back Sam Adams as they feted a friend’s birthday.

Move from the beyaz peynir on to a salad course. Start with the eggplant spread, shepherd’s salad, consisting of chopped tomatoes and cucumbers, and don’t neglect the taze fasulye–steamed green beans with tomato, served cold with olive oil. Part of the elegance of Turkish cuisine is to embrace the flavor of the ingredients themselves, unadorned. Salad dressings are foreign, the typical veggie topper is olive oil with a trace of lemon. To go with all those veggies, try a warm, herb-and-cheese-filled pastry called sigara böreği.

For your next course there are a host of kebabs available: the spicy Adana kebab, named for a southeastern town; the classic shish kebab; and mixed grill platters featuring grilled lamb chops. Lamb is the red meat of choice in Turkey, but chicken versions are also widely available. Pescatarians can tuck into traditional Mediterranean fish selections like levrek (sea bass) or çupra, a plump variety of sea bream.

If meat is in your diet go for the restaurant’s signature dish, the beyti kebab. Traditionally, this dish is mildly spiced and comes wrapped in lavaş bread. Taci’s Beyti takes the dish further, spicing the ground meat more heavily and adding chopped green chiles. The spicy meat is served atop grilled pita bread and garnished with tomatoes grilled just to the point of their skins cracking.

Taci’s Beyti also has a range of pide, oblong-shaped pizzas topped with kaşar cheese, similar to mozzarella, and and toppings like ground lamb or kuşbaşı–chunks of lamb. For full-on Turkish flavor, go for the sucuklu pide, topped with sucuk, a type of lamb sausage often served with breakfast. If you really want to impress the staff, ask your server to have your pide topped with an egg. 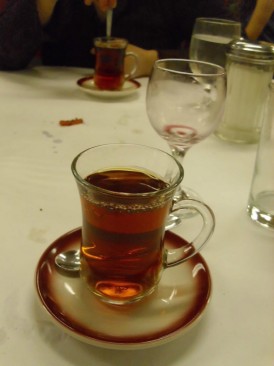 Taci’s Beyti serves an array of desserts, but consider topping off your meal with Turkish tea and heading a few doors down to Güllüoğlu Bakery (1985 Coney Island Avenue, 718-645-1822). It’s the first U.S. outpost of a Turkish chain that’s been around since 1871. The standard pistachio and phyllo dough concoction is available but try another variety like a creamy sütlü Nuriye, baklava steeped in milk and hazelnut. Güllüoğlu sources its pistachios from Gaziantep Province, the country’s center of production for baklava and that famous green nut. Brooklyn-phobic friends can indulge at the chain’s locations in Midtown East and Astoria.

For a quick bite on the run, you’d be hard pressed to find a closer approximation of a traditional Istanbul workday lunch (or dinner) in Midwood than Memo Shish Kebab (1821 King’s Highway, 718-339-8001). Go for some authentically crusty döner kebap, sliced just off the spit. Go another step further and opt for İskender kebab, döner slathered in butter, tomato paste and yogurt. A lighter option is the döner sandwich, served inside a pita with a small side of cacık–Turkey’s slightly more liquid version of Greek condiment tzatziki. Memo also has chicken döner on hand, a Turkish street treat that’s harder to find in New York than the standard lamb variety.

Out and about in the wee hours—and feeling it? Do like the Turks do and stave off your hangover with işkembe, or tripe soup, at the Turkish Café (1618 East 16th Street, 718-375-9237), open 24 hours for your offal needs. Turkish folklore holds that the tripe absorbs the alcohol, but it’s more likely that the garlic and lemon-laden broth perks up the drunken palate. The less intrepid can opt for mercimek–lentil soup.

Nerdy Turkish fact: Turkey is the world’s largest producer of hazelnuts—accounting for some 70 percent of the world’s annual harvest. Most of that bounty gets shipped to Europe but you can claim your share at King’s Gourmet Foods (1508 King’s Highway, 718-376-1585). Come for the olive samples and stay for the panoply of Turkish branded lentil soup packets, dessert, olive oil, dried apricots and gallons of ayran–a salted yogurt drink that’s surprisingly refreshing on a hot day.