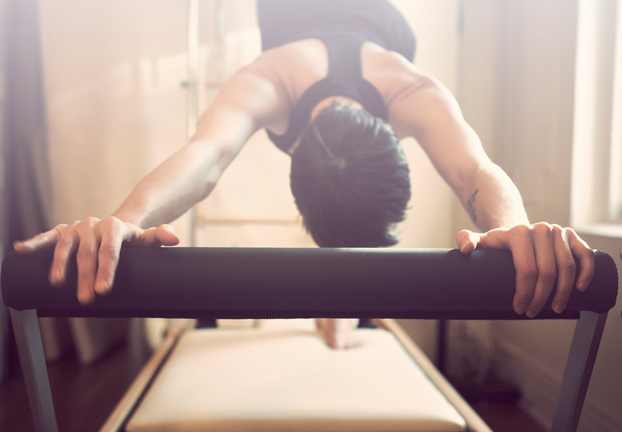 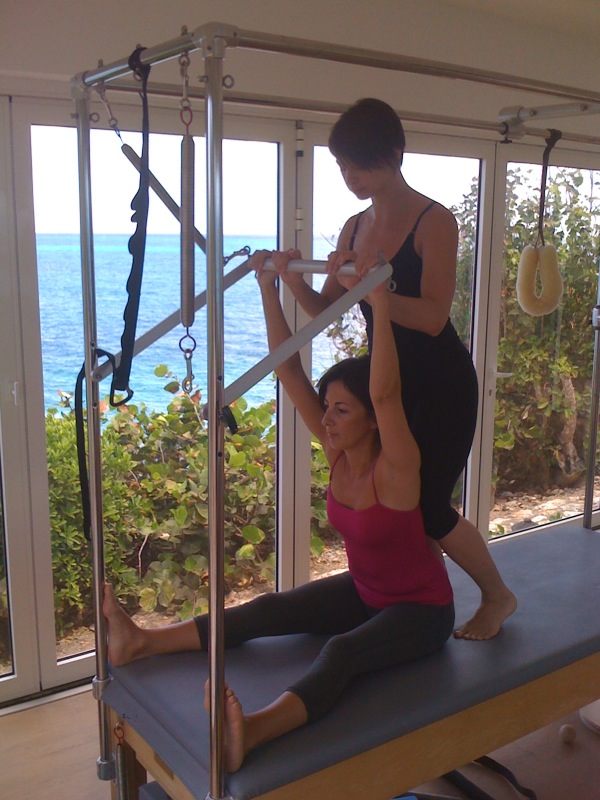 Brynne Billingsley at a PIlates retreat in St. Martin.

We’ve all heard it–getting enough exercise to stay energetic and healthy is all about finding the activity that’s right for you. But what if the thought of boot camp terrifies you and running sounds like a full-on body assault? Maybe yoga is too flaky and team sports conjure up old gym class nightmares. Pilates offers a kinder, gentler path toward activity enlightenment.

Once a niche fitness routine reserved for dancers and celebrities, Pilates has become as ubiquitous in Brooklyn as thick-rimmed glasses and vintage tattoos. Originally designed by former gymnast Joseph Pilates in the early 20th century and adopted by professional dancers and athletes as a way to train and rehabilitate themselves from injuries, Pilates is now the go-to fitness regime for anyone looking to tone up, improve their posture, and impress friends with their lithe, limber appendages. Added bonus: with a few exceptions, it doesn’t even feel like exercise until your sore muscles emerge the next day.

Whether you’re a Pilates novice or a practiced student, longtime Brooklyn resident Brynne Billingsley, a classically trained dancer and Pilates guru, can help you achieve your health and fitness goals. In March, Billingsley, 31, joined up with healing arts collective Be Well (a conglomerate of holistic health practitioners which includes a nutritionist, acupuncturist, massage therapist and an aesthetician) to open up her very own studio, Progressive Pilates, in order to offer private, one-on-one Pilates instruction, as well as Thai massage.

Billingsley taught at local gyms Absolute Power and Maxim before landing a regular gig offering (now) hugely popular–and uber-affordable–mat-classes at Williamsburg’s Greenhouse Holistic yoga studio. As any one of her devoted students (this writer included) can tell you, Billingsley is tireless about changing up her routine, customizing each one to her class’s specific requests and incorporating new methods and techniques as she discovers them.

The body issues she works with are, she says, very specific to the Brooklyn population. “I see a lot of tight neck and shoulders and a lot of lower back and hip tightness and wrist pain from people who write or lift heavy objects or wait tables,” she says. “The service industry brings in a typical pattern.”

Billingsley is equally in tune with the financial constraints of her target demographic. “I felt that because I do have such a strong connection with the Williamsburg community and had that loyal following, I wanted to really extend the one on one personal sessions to the community,” she says. That’s why she’s offering an Artist Special, which consists of an introductory three-session package of private sessions for $150, intended for “people who need a sliding scale service, who may have injuries, or artists who are working in the service industry who want to take care of their body and don’t necessarily know how.”

Erin Hewgley, a sculptor-cum-waitress who’s been taking Billingsley’s classes for a year, recently signed up for a passel of private sessions in Billingsley’s new space. “I always felt great leaving [Brynne’s] class — there are things that she can tell that I need, exercises that work for me,” says Hewgley. “So once she had opened up her own studio, I knew I needed help crafting a personalized routine. I realize how special the one-on-one sessions are. It’s not just having a work out. It’s like the chiropractor, massage therapist, doctor and strength trainer all at once.”

If you’re looking for an even more cost effective way to work your core, check out the YMCA–yes, the YMCA. Max Vogler, who trained at the famed Kane School before starting up his open-level classes at the Greenpoint YMCA, has won a devoted following, as a recent Friday morning class in the cavernous gym space revealed. Employing an imprinted-spine technique and utilizing the basic “stomach series”–a five-movement exercise repertoire that includes the muffin-top-banishing “criss cross”–Vogler keeps his routine fairly static, so that beginners can master the progression while the more practiced among them can refine and tweak. 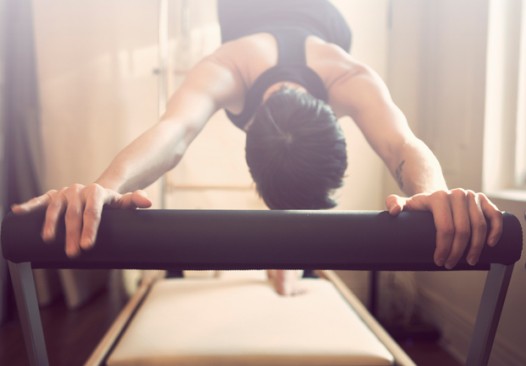 Brynne Bilingsley on The Reformer.

“Because of the precision required in really mastering an exercise, Pilates never gets easier. If you’re doing it right, it only gets harder, more challenging,” says Vogler, who also teaches equipment-based classes and private sessions at Maxim and Soma gyms. If you can’t make it to one of Max’s classes–he’s only there twice a week–check out Mimi’s Core Conditioning class, a more contemporary spin on classical Pilates that incorporates yoga and other isometric exercises. Later this month the Y will also be introducing TRX Suspension Training, a fitness technique developed by the U.S. Navy Seals that uses the body’s own weight (and a series of straps suspended from the ceiling) as resistance training. For around $60 a month for a membership, the tummy-toning options at the Y are pretty impressive. TRX classes are an additional fee, which is lower for members.

North Brooklyn too much of a schlep? Visit Downtown Brooklyn’s gorgeous Physiologic studio for a gut-busting group class on the famed Reformer (yes it looks like a medieval torture device and no, it won’t cause lasting damage). Owner Lynda Gehrman, a STOTT-trained instructor whose technique can best be described as classical with some adaptations, began offering private Pilates instruction five years ago in collaboration with her husband, a chiropractor with a storefront practice below the studio.

Last summer, Gehrman started adding group classes to the lineup as a way to provide more affordable options to practitioners seeking personalized attention. A recent class with instructor Shannon Green, who’s been with Physiologic for three years, left me energized, aligned, and a good two inches taller. $15 buys a group class with a student-teacher, but Gehrman’s rigorous standards ensure that even teachers-in-training will give you a work-over that’s as nurturing as it is challenging. With all the money you save, you’ll be able to afford that designer swimsuit cut to show off your newly toned bod–or a few dozen Rockaway Tacos.