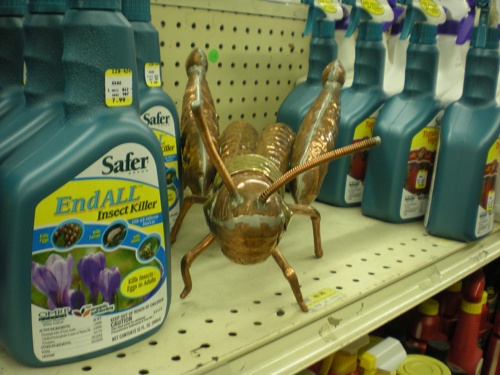 On Saturday, June 18, the folks at Crest Hardware will be celebrating a day of tool-inspired art called Crest Fest.

Crest Hardware has kept North Brooklyn stocked with hammers, paint and nails since 1962. Crest Fest began in 1994 after artist Gene Pool pestered then-owner Manny Franquinha for “one window to display his art.” One window turned into two, and before long, Gene Pool and his friends had covered the store in art. They held the festival from 94 to 95, and then Manny’s son Joe, the current owner, restarted it in 2008. 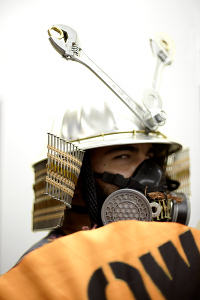 Today Crest Fest draws an estimated 4,000 people and features works that complement the merchandise: a copper grasshopper by Jude Ferencz among the bug repellents, plant speakers by Kayrock & Mikal Hameed, full samurai body armor made of hardware by Jeremiah Jenkins. Others are less bound by the theme, like Ted Stanke’s giant penny made of pennies or Eric Hayes’ renowned street art. All will be on view for the next six weeks.

Joe, who is dedicated to fostering community between longtime residents and artsy transients, sees helping complete projects as part of the store’s creative thread. He likens the back tool counter to a trusted bar: “People have employees they like.”

This Saturday’s program will feature work by 120 artists, including two local teenagers, upbeat live music (Joe is excited for the afro-funk band EMEFE), food vendors, face-painting and popcorn for the kids, and handmade artisanal goods and libations for the adults. Proceeds support City Reliquary, the non-profit museum dedicated to preserving Brooklyn history.

The interpretation of hardware art is broad. “It can be just nuts and bolts,” said Joe, “or some people play with the retail aspect—art is retail, retail is art—and reverse shoplifting: Hiding art in the shelves.”