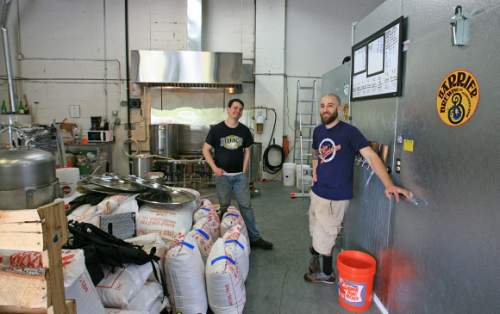 Does 3 beers from an award-winning brewery for $9 sound appealing? If so, purchase tickets from Beer Menus. Then head to 61 Local this Saturday for Barrier Brewing’s first anniversary party.

61’s proprietor, Dave Liatti, who helped Sixpoint perfect its brewing system, has a deep understanding and respect for small brewers who put care, attention, and effort into their beer, and Barrier is a new brewery that he’s championed since 61 Local’s opening.

Evan Klein opened the single-barrel brewhouse in June 2010. He singlehandedly brewed, sold, and delivered his beer until January, when Craig Frymark joined him. Both men are veterans of Sixpoint Craft Ales and avid homebrewers. They work from a little garage in Oceanside, New York. (See Nona Brooklyn for an in-depth interview with them.)

They produce 17 beers—without a flagship brand because they prize variety—and hope someday to increase to 30 or 40. In April they won New York State’s “Best Brewery” award at the TAP NY Craft Beer & Fine Food Festival.

The success is hard-earned. The pair has suffered heat stroke, 13-hour brewing days, and the uncertainties of a start-up. But they’ve had help. “Our beers have been perfected over multiple batches and the implementation of highly trained tasting panels (friends who like to drink beer),” they explain o their site.

Saturday’s event is free and open to the public, but a Beer Menus ticket will save you on the cost per pint. You can choose from the 13 different Barrier beers that will be poured, from Antagonist ESB to Beech St. Wheat to the Mare Undarum Belgian IPA. Joining these two typically opposing styles–the agressive, hoppy American IPA, with the more malt- and yeast-driven Belgian ale–is a sign of Barrier’s creative spirit.

With this event, Evan and Craig can achieve one of their goals of Barrier Brewing: To spread the world of great beer through the creation of great beer!