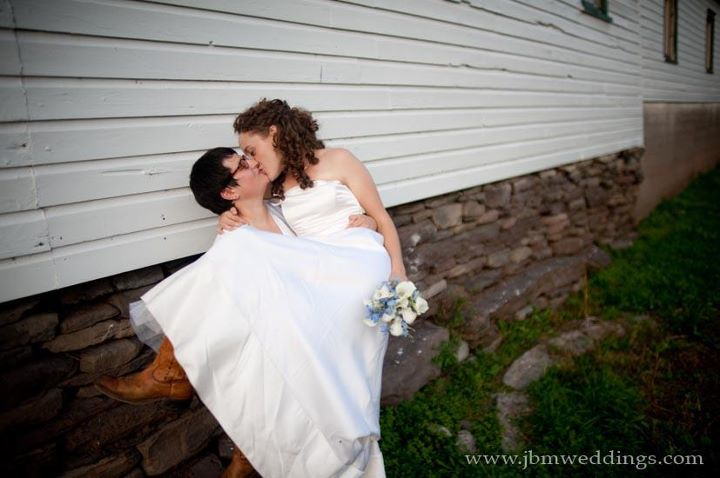 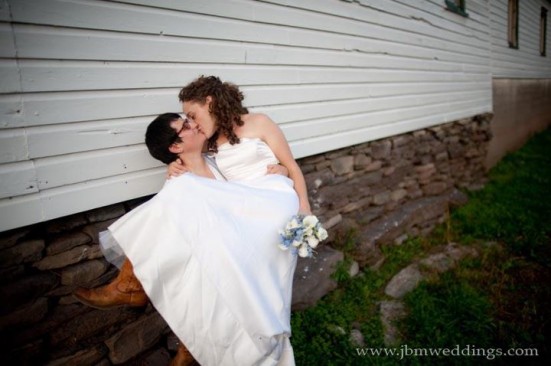 Gina Pensiero and Anika Solveig Habermas-Scher first met while in college at the University of Michigan, Ann Arbor. But it took a fateful night at Bar Matchless in Greenpoint for the pair to fall in love. “A mutual friend was playing in my band and Anika had stopped by to see the show,” Gina explains. “Whiskey was involved.”

Two years later, they were engaged. Gina and Anika married on September 3, 2011, at Stone Tavern Farm in at Roxbury, New York. “The Marriage Equality Act was passed just in time for our wedding, which was the best wedding present we could have ever received,” says Gina.

Gina, 28 is a freelance writer, editor and musician. She runs the Bloggie-nominated music blog, One Sweet Song, as well as having written for The New York Times Local Blog for Fort Greene/Clinton Hill and Nerve.com, and plays guitar, sings and writes songs in the Brooklyn-based band, Palmyra.

Anika, 28, is currently in an MFA program in theatre at the University of California in Irvine. She is a member of New York City’s Barefoot Theatre Company. She has also performed at The Guthrie with Frank Theatre Company and The Public with The Internationalists.

Though their hearts are still in Brooklyn, they currently reside in Costa Mesa, California while Anika finishes her studies.

Hurricane Irene, which passed through upstate New York the weekend before the wedding, nearly derailed the festivities, but as with the Marriage Equality Act timing, Gina and Anika got lucky. “Our flight was canceled,” Gina says, “We were supposed to land on Saturday evening, so that was obviously out. We ended up flying to Houston, then to Pittsburgh, then driving seven hours from there. It took two days instead of six hours, but we got there!”

When they arrived in Roxbury, roads were closed, and evidence of the storm’s destruction was everywhere. They learned that the power was still out at the farm. But, everything worked out in the end. The power…came on at the exact moment our car pulled up to the property,” says Gina. They were also concerned that some guests wouldn’t be able to make it because of travel delays, but in the end everyone showed. “There was not a dry eye in the house for our ceremony,” says Gina, “And, we had a raucous party.”

Anika’s wedding party consisted of Beth Hoyt, Amanda Webster and Isabel Rousmanier. Katherine Kornas, who also printed the save the dates and invites with her letterpress company, Wild West Letterpress, Kenneth Roebuck and Madeline Pensiero, Gina’s sister, made up her party. Their first dance as wives was to Ingrid Bergman by Wilco and Billy Bragg.

They spent the week following the wedding in New York visiting friends and relieving their intense homesickness. Next year the pair plan on taking a proper honeymoon in Greece.

As for marriage? Anika described the couple’s new bond saying, “Mainly, we feel more united. If we were furniture, we went from being plastic lawn chairs to an oak table.”