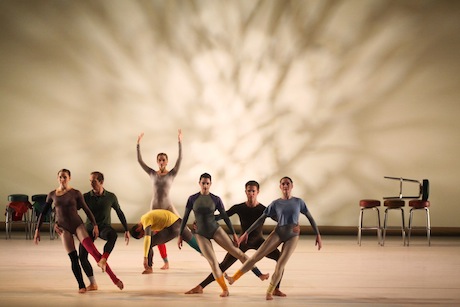 Merce Cunningham’s Legacy Tour is coming to a close. The company will perform for the final time on New Year’s Eve at the Armory before they disband. BAM, a significant venue for Cunningham’s work since the company’s beginnings in the 1950s, is hosting the tour’s penultimate American performance over the course of four, sold-out performances through Saturday, December 10th.

After the choreographer’s death in 2009, his company began touring internationally with 18 of his groundbreaking works as a part of his Legacy Plan. The tour is a celebration of Cunningham’s work and a final opportunity for audiences to watch his choreography on the company that he trained.

When the tour is over, the Cunningham Dance Foundation will transfer its resources to the Merce Cunningham Trust, a foundation committed to preserving his work for future generations through “Dance Capsules,” digital archives that store performance videos of his choreography, as well as sound recordings, lighting notes, and images of costume and set designs created by some of the most impressive artists of the twentieth century.

Over the course of four nights, BAM is showing six of the 18 pieces cycling through The Legacy Tour, and among them, audience members will spot costumes by Jaspers Johns, décor by Roy Lichtenstein, and Andy Warhol’s installation, Sliver Clouds.

BAM’s segment of The Legacy Tour opened on Wednesday, December 7th with Roaratorio (1983), a collaboration between Cunningham and his life partner, John Cage, inspired by James Joyce’s Finnigan’s Wake.

The set, a blaring white backdrop that merged with a white marley floor, was bare except for seven soda-shop bar stools. Dancers appeared on the side, wearing warm-up outfits–unitards with brightly colored shirts and legwarmers. Occasionally, a dancer would peel off a piece of clothing and tie it to a stool.

For most of the hour, the movement recalled a jaunty Irish jig. The dancers, with their quick steps and clean pointed toes, were so light on their feet that they seemed to be both human and sprite.

Full ensemble sections focused on circle dancing or the weaving beauty of lines. The movement was highly repetitive in the style of a social dance. The dancers smiled and broke into pairs, assuming traditionally gendered roles. Women paired with men, often holding hands.

Men lifted women in simple gliding lifts, and the piece returned to a modern tone when the dancers slowed. A quartet of perfect curves emerged, arms or backs bent like archer’s bows. These slower sections, interspersed throughout, embodied the gentle of rock of a boat on the ocean.

Cage’s score contrasted with the movement, layering discordant sounds into a collage of a man chanting, cars roaring, water falling, and birds chirping interspersed with drumming, crying, gurgling, scraping, and crowing–just to name a few of the sounds. An Irish fiddle echoed beneath the noise with an occasional flute, existing on a different plane of consciousness. The score only broke for one extended moment, and the theater was silent except for the rhythm of the dancers’ feet and their panting breaths.

The piece’s final image was a shadowy projection, like light shining through shattered glass, perhaps reminiscent of an Irish rose–a perfect, ephemeral image to show near the end of a legacy tour.

And in honor of Cunningham and all his accomplishments, the audience gave a standing ovation.