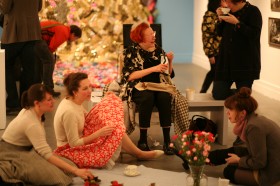 It’s too bad we’ve misplaced our pearls. They would have come in handy at A Feminist Tea Party last Saturday in DUMBO.

Fortunately, its hosts Suzanne Stroebe and Caitlin Rueter were wearing enough for all of us to feel a bit like ladies (and the occasional gentleman) who lunch. The duo have been co-hosting conversation hours in cinch-waist skirts, shrunken sweaters, kitten heels (and of course strings of pearls) for two years now. “We’ve also done pre-suffragette-era and late-sixties [costumes]– more like swinging sixties cocktail party,” Stroebe said. You could say Sarah Palin had something to do with it.

“It started a little bit as a tongue-and-cheek response to the Tea Party movement in January 2010, which is when we began,” Rueter said. “And shortly there after, Sarah Palin said she was a feminist. (The idea of which incites laughter in both ladies.) We decided we had to make fun of this in some way.” And while elements of A Feminist Tea Party are intended as a joke, including to an extent Stroebe and Rueter’s vintage attire, the larger purpose of the project is rooted in something deeper than a cup of oolong.

A Feminist Tea Party combines the conscious-raising groups of the 1970s and a historical reenactment of a mid-century tea party. As Stroebe and Rueter see it, their collaboration lies somewhere between a participatory event, a performance, an installation and a joke.

The two met in graduate school at Parsons– both women were getting the MFAs. “We were friends, but we really became close while working on this project,” Stroebe said. Their first tea party was at Winkleman Gallery in Chelsea. It lasted an afternoon, though a typical tea party lasts five hours or so at a time, and it’s not uncommon for Stroebe and Rueter to host parties that last a few days.

They’ve hosted 11 tea parties in total, and the art world seems to embrace their project. They’ve held tea time at art fairs on Governors Island and in Miami as well as at the Santa Cruz Museum of Art and History. Last November, the two packed up their pots to conduct a tea-party tour of California– Stroebe lives in San Francisco where she recently relocated from Greenpoint.

Tea for two...or many more.

It was tea for 2pm last Saturday where A Feminist Tea Party was part of the Illegitimate and Herstorical exhibition at Artists In Residence Gallery curated by Emily Roysdon as an examination of alternative economies. Fittingly, once tea was served in a covetable collection of tea cups Rueter inherited from her grandmother plus the occasional “replacements from dollar stores because we always break a few,” the conversation centered around the economy and gender with Occupy Wall Street, as well as class mobility, being discussed. Both tea and conversation were flowing before a rogue fire alarm threatened to put a kibosh on things. 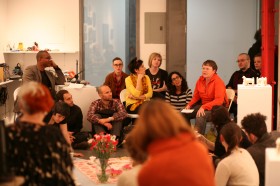 “I think this is a good time to grab a cupcake,” said Rueter, ever the consummate host. She and Stroebe had laid out quite a spread. It was more of a tea-party picnic with a gingham cloth and pink carnation scarf serving as the centerpiece. Tiny tea cupcakes–organic with beet icing–and bowls of strawberries complemented two pots of black and green tea and a vase of carnations. But not even the bundt cake could make us forget the droning of the fire alarm. Just as we were sure its strobing light would induce seizures, it stopped.

It’s not unusual for things other than water to get heated at A Feminist Tea Party Stroebe and Rueter say. One tea party turned into “a blood bath” when the topic turned to calling women sluts who wear provocative Halloween costumes at a college in California; however, Saturday’s installment was rather tame with clashes limited to the occasional eye roll.

After two hours of talking, the crowd had swelled to the point where it no longer fit inside the space, and partygoers began debating from the doorway. In total upwards of 40 people attended the event. The crowd ranged from tattooed hipsters to silver-haired septuagenarians. It was a mix of art-world members and people who’d stumbled in off the street. Julie Lohnes, A.I.R.’s gallery director, eventually had to put an end to the party as Illegitimate and Herstorical’s closing reception was slated to begin.

In an effort to get up and see guests off and on their way, Rueter sadly shattered a clover-printed tea cup she’d been sipping out of all afternoon. (She’d break another five cups while cleaning up).

“It always happens,” she said, shaking her head and collecting the shards.