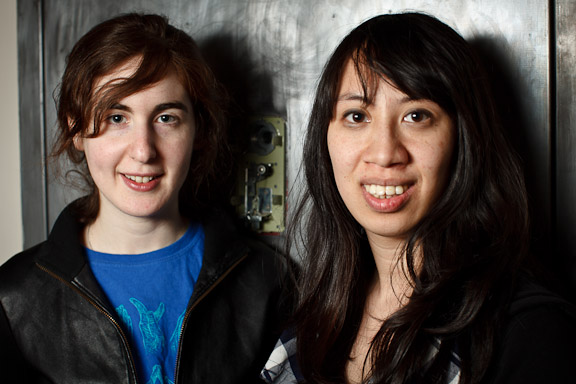 Every month or so, Brooklyn Based unveils an exclusive song by a Brooklyn band, recorded at Nadim Issa’s state-of-the-art recording studio in Gowanus, Let ‘Em In Music. Then, Laura Leebove of the music-inspired food blog Eating the Beats creates a recipe with—or inspired by—the featured artist. This month’s mp3 is the brand-new track, “Robbie’s Song” by Hilly Eye, and the recipe is Lemon blueberry pie with blueberry sauce, cooked with the band.

Guitarist/vocalist Amy Klein and drummer Catherine Tung want to make a big sound out of relatively few parts. As Hilly Eye, the Brooklyn duo writes songs that have elements of melody interlaced with noisy, abstract backgrounds and often-shouted vocals, taking influence from other like-minded two-piece acts like Lightning Bolt, Shellshagg and particularly Afrirampo, a pair of women from Japan with music founded on manic drums and gutteral shouts. When Klein saw the latter perform live, she thought, “OK, I want to be doing what those girls are doing.” For Klein, who used to play guitar and violin in the rowdy New Jersey punk band Titus Andronicus, noise music is easy to get lost in. “You have the sense of connecting to something foreign or outside yourself when you listen to it,” she says. Tung says she loves it because it’s visceral and there’s room to experiment.

Klein and Tung have been steadily progressing since recording a few demos in late 2010: Now they’re getting ready to release a 7-inch in May via Don Giovanni Records, and they’ve begun recording their first full-length album, which will include new songs and reimagined, more complex versions of some of their earlier tracks. Klein says the combination of extensive time in the studio and the intimacy of being a duo has helped tighten their live show. “Because it’s two people, you have to be really together—otherwise it’s very obvious [if you mess up],” she says. “It only comes with practice, just learning how to really listen to each other, and [when you’re in a studio] you can actually hear what you’re doing. That really helps the live stuff.”

In the meantime, they’ve recorded a brand-new track called “Robbie’s Song“–so new that they just finished writing it earlier this month, in between their two recording sessions for BB Songs. It’s a perfect balance of melody and chaos: You won’t hear a second of clean-cut guitar in its four minutes, but there’s plenty of room for the vocals, which switch between delicate and layered, and steady and half-spoken. When I first asked Klein about the song—which, at the time, had no lyrics or title—she said it had a lot of “triumphant” guitar parts, which wasn’t surprising after learning that she likes to write lyrics that are motivational. “I think most of our lyrics are more impressionistic than they are describing a specific situation,” says Tung. “Robbie’s Song” came from an experience Klein had with a friend, but Tung says in a more general sense she finds it to be about pushing against obstacles, fear and hopelessness in particular. “I think about Weakerthans’ Reconstruction Site, Amy Hempel’s Reasons to Live and Macbeth’s soliloquy, all of which explore the feelings we experience when faced with tremendous difficulty,” she says. “I hope to take the word ‘tomorrow’ in a more optimistic light than Macbeth did.”