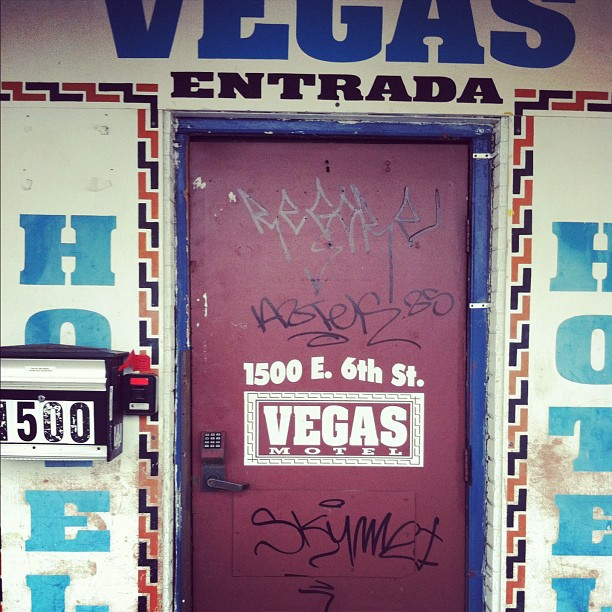 When one of our writers, Jay Honstetter, told us he was heading down to SXSW to play guitar in a band called Freshkills (their 3rd album, “Raise up the Sheets“, was released this week, and their latest video is here), we got a little jealous. Since March 10 he’s been road tripping and touring, playing shows in Ohio, Tennessee, and Georgia, eating bad food, and sending instagrams and posts from his phone. Check out the slideshow and his reports from the road. He’ll fill us in next week about Austin.

We started the tour yesterday with a nine-hour drive from Brooklyn to Athens, Ohio. The guys showed up ten minutes early to pick me up, being more punctual than punk rock but that’s a good thing I think. The hours driving were spent making moves in about 10 different games of Words With Friends, nodding in and out of sleep and listening to anything from Lynyrd Skynyrd to The Modern Lovers.

On arriving in Athens we were greeted by a surprising number of hot dog joints (to me even 2 within four blocks is surprising) and mobs of jersey-wearing frat packs (many of them hammered as early as 9 o’clock) roaming the streets and littering every bar and restaurant with slurred words and conversations about sandwiches, TV, and just about anything you can possibly imagine a bunch of drunk kids yapping about.

The Union, the club we played at, was great. It had two floors, which unfortunately meant carrying my 80-pound amp up the steps but I guess that’s part of owning a stupid 80-pound amp. The room and stage we played in were a pretty good size and the bartenders were really nice and served up cheap booze–it also happened to be “Jameson Week” at the bar which meant I was drinking Jameson for the night.

We had a pretty big crowd at the show, partly owing to Bad Seed Jim Sclavanos (who’s played with Nick Cave and The Bad Seeds/ Grinderman/ Teenage Jesus and The Jerks) filling in on drums for the tour, and Mishka (bassist) having been there tons of times and having lots of friends there. The show went really well and people seemed to really dig what we were doing. It was a nice start to the tour.

Afterwards we checked into a Days Inn and I slept from about 4-8. We got some Mexican food for breakfast and are now on out way to Knoxville, Tennessee. It’s a six-hour drive, not nearly as bad as 9 hours.

Dinner- hotdog with bacon and coleslaw

Jim,Tim and Zack in Athens

Drawing by Chris Monday from The Union in Athens, Ohio

Rest stop on our way from Athens to Knoxville

And the wrist band collection begins!

The statue of liberty in Austin has a gun

On the road now from Atlanta to Austin–our goal is to do 14 hours today and the last hour or two in the morning. We have a show at noon tomorrow so we’ll have to be up pretty early.  I’ve slept for 3-4 hours a night so far since leaving so I’m feeling pretty awesome! I’m a light sleeper…

Anyway Knoxville was a good time. When we go to our hotel we walked over to a place called Asia Cafe for a bite. This place was amazing. The bar and tables all glowed green, red, blue–the colors just kept changing. They had NASCAR on the tv and a band in the back who shamelessly covered John Mellencamp’s “Hurts So Good,” a request apparently. The Chop Suey was good and supplied me with my vegetables for the day.

The club we played at was called the Pilot Light. It sat next to a music equipment/record/vintage shop. The club was pretty small but filled up quite nicely by the time we played. The rest of the neighborhood was pretty dull, there were a few bars that were all empty and one that was blasting nu metal. To be fair, it was a Sunday night so I couldn’t really expect the town to be hopping. But fuck any place that blasts nu metal, I’d avoid that place like the plague if I lived there, there’s no excuse for that.

After the show we went back to the hotel where it was my turn to sleep in the van (we do this thing where we all alternate sleeping in the van each night to be sure no one steals our stuff). After Tim and I shared a few swigs of bourbon from my flask it was time for me to see what goes on outside of a Quality Inn between the hours of 2 and 4 am in the middle of Knoxville.

Lucky for me it was fairly warm outside so the sleeping bag we have in the van was perfect. I was worried about being woken up early in the morning by people leaving the hotel but that wasn’t really the case. During the night there must’ve been 10 or 11 cars coming in and out of the lot. I don’t really know what was happening but people kept coming in and out of each others rooms and moving their cars from spot to spot but they were all pretty quiet about it. I’m not so sure I want to know what they were up to but none of them tried to get in the van. I fell asleep by about 4-430 and woke up around 8 or so and had a cup of coffee with powdered creamer. It was gross.

After we left we hit up our first, of what I’m sure will be many, Waffle Houses. Then we drove to Atlanta.

In Atlanta our hotel was more like a residence. There seemed to be more people living there than just staying there. One lady asked me if we were Mormons. I still don’t know why she asked but I told her yes, of course we’re Mormons.

When we  got to the club we loaded in and did a sound check. The place was called The Earl and they hooked us up with a ton of drink tickets and a free meal. I has a burger w/ provolone cheese and an iceberg salad. The front room of the club where we ate had a good punk rock juke box and was super crowded.

So in Atlanta after eating I went for a walk around town and saw that every other bar and club was empty. Really not much going on. I passed a place called The Graveyard Tavern and it looked pretty grim (sorry had to go there). I looked it up and found some yelp reviews. In the “quick tips” “Original J” describes the place as “white girls dancing” and “Darrell Dudley d” describes it as “Eastside….  doing it big.” I don’t know, I went back to The Earl.

I had a few whiskeys and watched the other bands play. The Liverhearts were great and brought a pretty huge crowd. And they were so nice, they gave us the money they made from merch since we’re touring and could really use it.

We played to a small crowd, mingled a little bit, then went back to the hotel and slept. This morning we hit up our second Waffle House where I got cheese eggs and hash browns and are now on our huge drive to Austin. We have two shows tomorrow and one is at noon. It’ll be a long day but well worth it.

It’s been 4 days and I miss my girlfriend, my bed and my cat. But we’re having a great time and playing some great shows. I haven’t been to SXSW in years and I’m looking forward to seeing a lot of people I haven’t seen in forever.