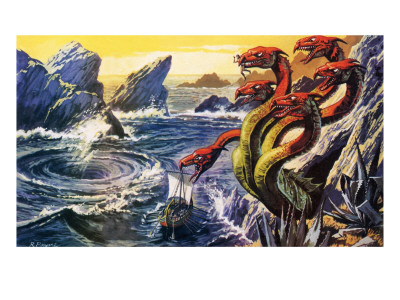 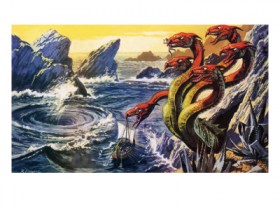 Scylla is the multi-headed monster, Charybdis the whirlpool abyss. You are the ship in between.

Last time on The Freelance Life we attempted to suss out the intricacies of douchery on the social network Scylla that is Facebook.  This week we battle our way through the dos and don’ts for freelancers within the online Charybdis known as Twitter. Twitter is probably most marked by people’s tendency to not understand it fully.  If you’re like me, you’ve had at least one awkward moment with a friend or colleague in which they broke it to you that you were not making the most out of your Twitter account.  Furthermore, you’ve probably had at least one social savvy friend try to explain to you how and why Twitter is so much more powerful that you could ever imagine.

Indeed, Twitter is very powerful, its ability to create a viral sensation far outpaces Facebook. On Twitter, information has the power to move faster and further than anywhere else on the Internet.  The trick is that you need to know the tricks.

DOs
Tweet often:  Twitter is unlike Facebook in that it’s more deliberate.  Many tweeters will tweet nine times in a day and then not at all. Twitter is a news feed and if you want people to stay curious about your content, you need to get it out there regularly. Space out your tweets too, don’t pile them up into one 10-minute period. Many services like Tweet Deck will let you schedule tweets (and tweet from multiple accounts).

Interact: This is the key to Twitter.  If there’s a magic bullet in the tweeting world it’s interaction. Liking something on Facebook is nice, but it’s a small gesture.  Retweeting on the other hand has major implications, especially if you’ve got a lot of followers.  @messaging people, is an even bigger deal.  If you have a heated debate with Kanye West, all your followers and his followers see it and it’s likely to become the topic of other conversations.

Know the language: Proper hashtag usage itself is a complete game changer for freelance writers on Twitter.  Every time you don’t use a # and could have, you’re doing yourself a major disservice. Follow @trendingtopics for an easy way to stay abreast of the chatter. The same goes for @s.  Any time you mention a person or a place, look for their Twitter account and @ them so that they can see that you’re talking about them and, perhaps, follow you back.  Furthermore, putting a period before the @ (.@) shoots your tweet to all the followers of the person you’ve mentioned.  This is a trick, use it sparingly.

Leave room for re-tweeting: You pretty much always want your tweets to be re-tweeted, and so you must leave enough room for that to be possible.  For instance, I’m @JonReiss.  Therefore, there must be enough characters free for @jonreiss to fit in a re-tweet. A good rule of thumb is to only use 120 characters for a given tweet.

Shorten your links:  This is purely a logistical consideration.  Shorter links are more alluring, more likely to be clicked, you can also see how many people clicked on those links with many shortening sites.  For this, I recommend su.pr from Stumble Upon, which not only shortens your links, but helps you track your stats and draw extra traffic from Stumble Upon. If you use a twitter app, like Hoot Suite or Seesmic, the link shortener and click tracker is built in.

Follow the outlets you write for: It’s a symbiotic relationship, and it will function as such on Twitter.  Always put the @ in front of their name when you mention them.

Use lists: Twitter can be a window, or several windows, onto the flow of information around the web. If you set up themed lists (like food, Brooklyn news, music or literary tweeps) you can keep better track of what’s going on and use Twitter as an RSS feed. You can also follow lists made by other users, like this list of New York Times reporters or the BB NYC Food News list.

Tweet your work…appropriately:  For a writer on Twitter, sharing links to your work is the most important piece of the puzzle and it must be done deliberately. Think about the way you look at your Twitter feed and keep it in mind as you share your work. It is okay to share the same link, twice, maybe three times in one day, just space it out.  In fact, if you write only one article in a week, tweeting it once a day for that week is okay, that’s what you are there for and nobody will fault you for sharing your work.  There’s just one important thing to keep in mind…

DON’T
Don’t only tweet your work: While links to your articles may be the lynchpin of your account, they cannot be the only thing you tweet about.  As writers, we’re in the somewhat difficult position of having to really think about what we say on our social networks.  We are expected to keep our feeds clear of the categorically dumb, which isn’t always easy. So, share your thoughts, but edit them, like you would your own work. Make sure any jokes you attempt read okay in text-based environment without your timing and inflection.

Don’t RT just for the sake of it: It’s important to re-tweet, but if you RT about your favorite soap star’s favorite soup, hoping to get in their good graces, you’re likely to annoy your followers

Don’t follow people for no reason:  It just gums up the works.  The point of Twitter, of Social Networking is for people with like-interests to share and interact.  If you start following people just hoping to get more followers yourself, you defeat the purpose. But, just finding their stream funny or interesting is reason enough to follow. Twitter can be like eavesdropping on million party conversations at once, if you like.

If you’ve just joined, followed all your friends, and want more people to follow, look for the agents, publishers, writers and outlets you’d most like to follow you, and follow them. Also, follow the people who have some connection to the topics you write about most often.

Send your tweets to Facebook: You should be tweeting a lot more often than updating your Facebook status, so if your tweets autopost, it gets really annoying to your Facebook friends. This goes for Fan pages, too.

Don’t follow your agent: This goes for Facebook also.  It was a question I recently found myself asking and checked with a few other agents.  It’s not a professional move.

Next week on The Freelance Life,  Dos and Don’ts from two writers with successful Twitter accounts.

Leave a Reply to Martin Lake