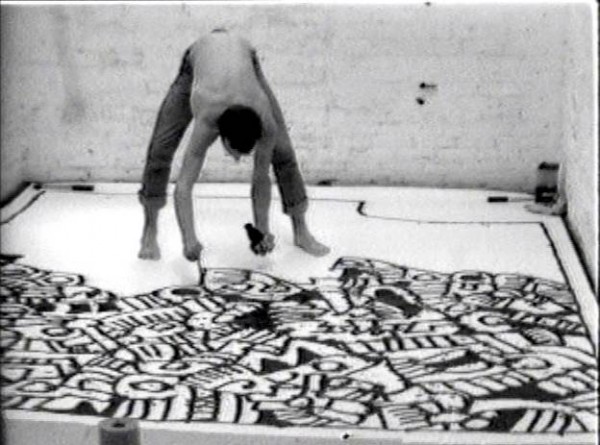 Keith Haring in a still from Painting Myself into a Corner (1979), © Keith Haring Foundatio

Should we be thankful for yet another Keith Haring show? After two gallery shows in New York last year, and multiple international retrospectives in the past decade, the short answer, believe it or not, is yes. Because what the Brooklyn Museum has to offer in “Keith Haring: 1978-1982” is much like the current dazzle of weather: magnetic and rejuvenating.

The artist, whose influence has rarely waned since his untimely death in 1990, was part of the young, rebellious crowd that reoriented New York art in the 1980s. Long paired with Jean-Michel Basquiat, Haring and his fellow street artists combined a punk attitude with a graffiti aesthetic, favoring the backdrop of dirty brick walls and subway tiles over the austerity of uptown galleries.

Part of what makes Keith Haring’s art so attractive is the appearance of ease: the thick, graphic lines that define his style seem to flow so naturally from his hand. But before such composure came much experimentation, four years of which curator Raphaela Platow wishes to bring to our attention in the first large-scale exhibition to explore Haring’s early career. The crossbreeding between studio and street that would come to define his legacy—as well as influence street artists today such as Barry McGee and Shepard Fairey—germinates within these years.

The show begins with largely unseen video works, a particularly fantastic example being Painting Myself Into A Corner (1979). Painting quickly and confidently to a punk rock beat, a shirtless Haring works on the floor until his mural has, quite literally, pushed him up against a wall. The work documents a transition from his Ab-Ex foundations (the movement of Haring’s agile body echoes the gesture of Pollock), to a push beyond the confines of studio walls.

Haring is unabashedly an artist of the city, and Matrix (1983), a mural that unfurls to nearly 50 feet in length, is the primary evidence. The dynamic force that radiates from every line could only come from the chaos and possibilities of a metropolitan life. Light bulbs threaten to burst, clocks rush towards midnight, bodies erupt in jubilation and crawl through each other.

Such visual zeal is echoed in an adjacent gallery where paintings are hung salon-style—stacked high and in varying registers. The boldness of each work emanates from the walls, and the pyramids, dogs, humans and aliens fluently converse beyond their frames. Since many of the paintings were originally hung together in one of Haring’s first New York installations at P.S. 122, it is a conversation resumed after 30 years.

The prolific output of Haring’s early years is rather astonishing, so much so that choosing favorites amongst the many collages, poems, videos, drawings, polaroids and paintings on display isn’t easy. (If forced, though, I’d lean towards “8 Sided Poem” from a September page of his 1979 journal.) Each work has its own charm, and one walks away with an intimate understanding of the personality that flowed beneath his trademark iconography.

The last is a room full of his subway drawings—white chalk figures that once lived underground next to Marlborough advertisements—and one is reminded what a loss Haring’s early death was to the vibrant New York community he helped create. The natural question seems to be: can the next subway artist please pick up the chalk?