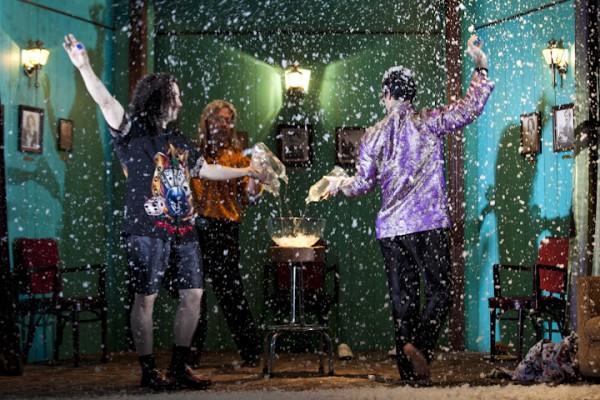 “This is our actual room…our basement rec room of magic…” they insist, and it is true that you can all but smell the mildew in the garishly painted wood-paneled New Jersey basement where Cuiffo, Lyford, and Sobelle’s alter egos Louie Magic, Daryl Hannah, and Dennis Diamond drink and show off their tricks.

Desperate to entertain, these three seasoned magic men sing, dance, spray glitter, sand, and streamers from every possible orifice, and generally transfix and transmute anything they can get their hands on in seventy-five minutes. Backing them up is Nick Kourtides’ faultless and hilarious sound design, which makes equally excellent use of power ballads and of the lonely beeping of a phone off the hook (a sound nearly as nostalgic as the couch upholstery).

Part satire, part homage to the hard-working little guy on the Atlantic City circuit, and part honest gee-whiz magic show, Elephant Room strikes a gentle, off-center note, leaving some in the audience unsure just how gleeful or hipster their reactions should skew. It’s easiest to just give in to Louie Magic’s suggestive winks and Harpo Marxian grin, and go where we’re invited to go.

It’s worth the trip. Under the buckteeth and the goofy suits, Magic, Hannah, and Diamond are serious sleight of hand artists, and their talents are presented in a manic, layered, subtly absurd frame that never calls attention to their finest achievements, letting them shine as understatement. While gloves are being milked and women sawed in half, the most arresting moments come from the simple mime-like attempt to lift a cinderblock, or a casually executed flick of the ankle that becomes a perfect dance routine.

And, unlike many things in this life, “Elephant Room” delivers on its promises. If they promise a tiger, expect that tiger. If they say there’s an elephant in the room…well, I won’t spoil it for you.

Louie Magic, Daryl Hannah, and Dennis Diamond may be down, but they’re not out. In their generous hands, we all have access to a kind of shopworn dignity (dignity, always dignity). They’re tacky, and terribly uncool, but they’re trying (and succeeding) to entertain us, and that hits somewhere deeper than simple satire. How do they do it? They’ll never tell.