UPDATE: Cat had to cancel last minute. Lady Lamb the Beekeeper is playing in her stead tonight at Union Hall! 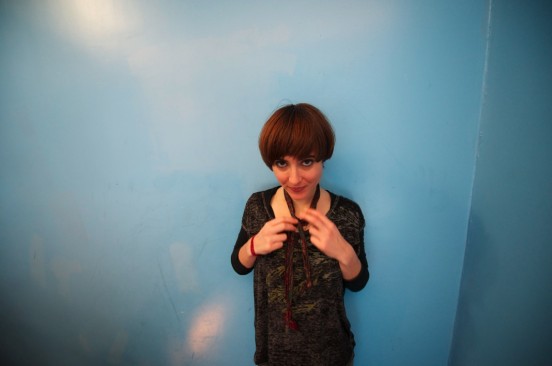 If you’ve followed the local indie music scene in the last few years, there’s a good chance you may have seen and heard Brooklyn’s own Cat Martino. For one thing, the singer has appeared as a backing player on the albums of fellow Brooklyn artists Sufjan Stevens and Sharon Van Etten and has toured with them. And throughout her career, she’s also performed at Brooklyn venues such as Glasslands, Union Hall, and Prospect Park. Most recently, Cat, who hails from Rockville Center, Long Island, has recorded her latest album, the gorgeous and atmospheric-sounding Yr Not Alone, which features Sufjan Stevens on the title song.

Hear songs by Cat at http://soundcloud.com/cat-martino

I caught Cat’s show at Manhattan’s Mercury Lounge back in September and it was literally a solo performance. With no backing players on stage with her, Cat was a one-woman band who played keyboards and guitar and used a looping machine. Like her album, Cat’s live show at the Mercury consisted of soulful and lush music. Aside from performing her own material at that gig, Cat did an a capella interpretation of the Cure’s “Love Song.”

Martino’s use of looping to repeat certain sounds could be traced back to her boyfriend’s pedal board. “It was really cool,” Cat told me in an interview for Spinner last year, “because all of a sudden, there was just this choir sound around me. I could make my voice sound like a bass, and I could make rhythms. It was really just a fun thing to do.”

Her album Yr Not Alone represents an advancement from her previous folk sound to something more electronic and ambient-influenced in her music. “I had changed and grown as a musician,” Cat said. “The way that I was playing was changing, and the way that I was singing was changing. So it was organic for [Yr Not Alone] to be very different. I was exploring new sound palettes and new instruments, so time had passed, and I was doing different things.”

Given her amazing talent as an artist, along with her impressive credentials as a supporting player (she recently sang backup for the Shins on Saturday Night Live), Cat appears ready to take her career to the next level. And in the perfect and intimate setting of Union Hall for her upcoming show, there’s a good chance you’ll experience a warm glow exuding from her music like I did a few months ago at the Mercury Lounge.