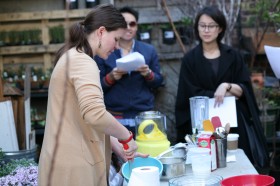 My nose was too stuffed up to stop and smell much of anything last Saturday morning at Rose Red & Lavender, the floral design studio and garden center in Williamsburg, but from what I could tell through watery eyes, owner Kimberly Sevilla’s floral offerings looked good enough to eat. Which was fitting, as I’d made the trek to her Metropolitan Avenue space  for a workshop on incorporating edible flowers into ice cream.

Since opening Rose Red & Lavender with her husband Enrique in 2008, following the birth of their daughter–the store name is a combination of Sevilla’s childhood nickname (Rose Red) and her daughter’s first name (Lavender)–Sevilla has offered weekly classes on a revolving list of topics covering everything from gardening basics to trickier topics like getting fruit trees to flourish in an urban backyard. For a nominal fee, the shop offers crash courses in areas as diverse as fungi and floral ice cream , last Saturday’s lesson.

A little after 10 o’clock, in the alley behind the shop amongst the rows of potted plants taking in a little sun, students formed a semicircle around our instructor for the day: Claire Goget, an employee at Rose Red & Lavender who’s currently in culinary school and somewhat of a savant when its comes to floral-infused ice cream. Classes are typically limited to six people, but the allure of eating ice cream for breakfast drew a crowd twice that size, so I tucked in between the branches of a Bartlett Pear tree and began to take notes. 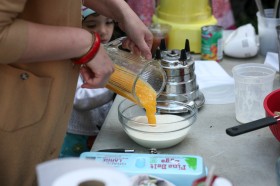 Giving Rachel Ray a run for her money, Claire started her cooking segment by giving us a list of edible flowers that could be used to elevate homemade ice cream from everyday to artisanal. Violets, chamomile and jasmine were among the more accessible ingredients I was confident I could find locally; others on the list I wasn’t so sure about, even in Brooklyn– Johnny Jump Up? Iceland Poppy? Bee Balm?

Luckily, the day’s ice cream recipes–Peach Chamomile, Honey Lavender, Chamomile Chardonnay and Lavender Sorbet–required only familiar flowers, which you could grow at home if you’ve got a green thumb. The dried lavender Claire used actually came from the Sevilla’s farm in West Virginia. For a an hour or so, we were taught techniques to keep air bubbles in our ice cream for texture and how to avoid ice crystals by not over churning our ingredients. In true cooking segment style, Claire had prepared batches of ice cream ahead of time, which she conjured from a cooler for us to try while we waited for a fresh batch to finish churning in her yellow Cuisinart ice cream maker. 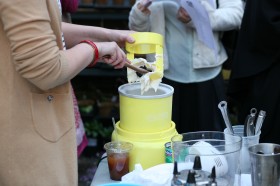 In truth, the day had dawned a little chilly for eating ice cream, but that didn’t stop any of us from passing the scoop around through shivering hands to take seconds, at times thirds, and Claire’s final advice did little to dissuade anyone’s sweet tooth.

“It’s doing your research and finding recipes you trust,” she said. “There are a lot of edible flowers. You really just have to test it out to know what works.”