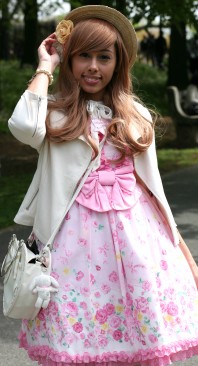 To say Yanise Cabrera loves Lolita Fashion, a popular subculture of Japanese street-style, is an understatement. She has an entire Tumblr devoted to the trend and frequently dresses in Lolita looks like frilly dresses, full skirts, petticoats and a fair amount of ruffles finished off with ribbons and bows, as well as the occasional stuffed animal accessory like a keychain, purse or hair pieces. I happened to see her in a head-to-toe Lolita look over the weekend as she was on her way to meet other members of the Brooklyn Botanic Garden Parasol Society for a fashion show at the annual Sakura Matsuri Festival. Her personality was as sweet as her outfit, and when I asked her–what’d you do this weekend?–she was happy to take a few minutes and tell me what she’d been up to.

FRIDAY: I hung out with my boyfriend. We actually watched Legend of Korra, and then we watched Community on DVD at my apartment.

SATURDAY: I got dressed. I took my time today, so it took about an hour and a half. My dress is from Japan. It’s a brand called Angelic Pretty. My purse is another Japanese brand–Baby, The Stars Shine Bright. I’m a big fan of Japanese culture, but I’ve never been. I’m trying to go this summer. I have friends–there’s a lot of us–we just hang out and dress up. It’s a mutual hobby kind of thing, so I meet a lot of people through our similar interest. We enjoyed the rest of the day walking around the park and see all of the flowers! After the festival was over we went to St. Marks to get frozen yogurt at 16 Handles and did some thrift shopping at Buffalo Exchange and a Japanese clothing store called Tokyo Rebel. Then I went home.

SUNDAY: I went back to the festival with some friends. This time we had a picnic under the trees. We took A LOT of photos if front of some flowers. Then we drove over to Bay Ridge, to Chinatown in Brooklyn, and went to this restaurant that had 1$ skewers, and 2$ beers. The name of the place is in Chinese but its spelled like this: 蜜思特烤吧

It was magical. And that was it! It was a lot of fun. I hung out with old friends and made some new ones, and that’s always cool.