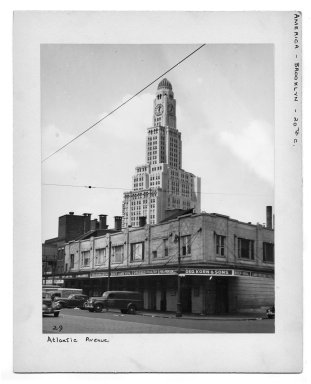 The Williamsburgh Savings Bank Tower, not long after it was built in 1929.

And from another angle, many years later.

Like a cathedral for money–a window in detail at the Williamsburgh Savings Bank Tower.

Squirrels, always saving. This one can be found on the Williamsburgh Savings Bank Tower.

An owl, ever a symbol of wisdom, financial and otherwise, carved into the Williamsburgh Savings Bank Tower.

The Williamsburgh Savings Bank used the dome on its original bank (at 175 Broadway in Williamsburg) as a logo, carved into marble as seen here in the Bank Tower.

The dome from the logo–now an HSBC.

The Dime Savings Bank on Dekalb.

Though now a Chase, it still looks much the same today.

The Dime Savings Bank and the Brooklyn Bridge, pictured on the bank’s front doors.

The god Mercury was an important symbol to the Dime Savings Bank.

Before it was home to Trader Joe’s this building was the South Brooklyn Savings Bank.

It’s still a pretty majestic setting for stocking up on green chile and cheese tamales.

These birds in the railings outside of Trader Joe’s were once symbols of savings, come to fruition–arguably their symbolism has changed now that they adorn a grocery store.

Brooklyn Trust Company on Montague Street is now a Chase.

Even though electric streetlights have made it unneccesary, this torch still (symbolically) carries a flame at Brooklyn Trust Company.

The Greenpoint Savings bank (now a Capitol One) was built in 1908.

Banks used to be built with more than just utility in mind–they were designed as cathedrals to commerce, conveying strength and security through their stately architecture. It wasn’t just soaring pillars and massive cast bronze doors that made Brooklyn’s banks of yesteryear distinctive. Tiny finishing touches carved into columns and exteriors depicting the savers of the natural world (think squirrels storing nuts for winter) and  human world alike adorned many of these structures. The somber, beige-and-glass-walled, drop ceiling-ed banks of today bear little resemblance to the regal, early 20th century buildings that our pennies used to call home. Though Brooklyn is filled with historic banks, walking from the handful we’ve chosen to profile, from the Williamsburgh Savings Bank Tower on the edge of Fort Greene to the former Brooklyn Trust Company in Brooklyn Heights, makes for a nice little stroll through borough, and financial history. 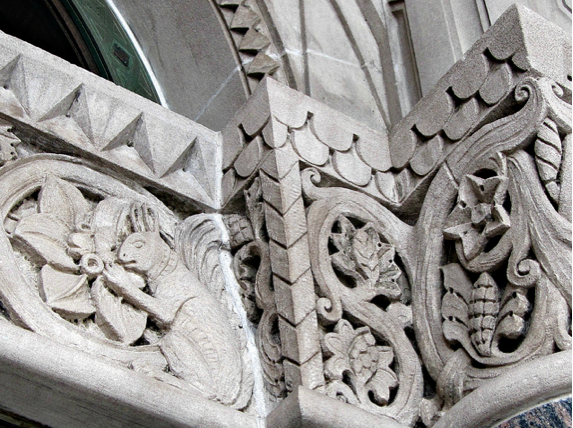 Squirrels, always saving. This one can be found on the Williamsburgh Savings Bank Tower.

The Williamsburgh Savings Bank Tower at 1 Hanson Place long stood as the  tallest building in the borough until it was recently surpassed by the Brooklyner, and it’s the most visible of the old bank guard. At 512 feet tall, the 1929 Byzantine-inspired design by Halsey, McCormack & Helmer towers over the intersection of Atlantic and Flatbush. In 2006, the building was converted into luxury apartments, but the public is still welcomed inside on a regular basis, most notably for the winter months of the Brooklyn Flea, which is held in the former banking hall. The hall is 128 feet long, 72 feet wide, and 63 feet tall, with limestone walls rising up to a mosaic ceiling of zodiac signs by Angelo Magnanti. Bank teller windows with red marble counters, one of the over 20 different types of marble used in the building,  line the hall below.

The pillars inside the bank bear reasons to save, carved into the capitals atop each pillar, including the future, old age, retirement and education. A mosaic aerial view of Brooklyn (spelled in its original Breukelen) by Ravenna Mosaics of Berlin crowns the end of the hall. Lions flank the main door outside, protecting a padlocked box with their claws, and other symbols of thrift abound in the ornamentation of the exterior, including beehives and squirrels hoarding nuts.
Click through for more historic Brooklyn banks, and a slideshow.

Ironwork doors by Rene Chambellan depict different laborers, including a mechanic and a carpenter, who would have deposited their savings in the institution. An observation deck on the 19th floor was once open to the public for sprawling views of the city, but it is now incorporated into one of the private residences, and 60-ton doors secure the basement vault. The clock at the top of the setback tower, at 27 feet in diameter, was once the largest in the world and sits just below a dome designed to refer to the Williamsburgh Savings Bank’s first branch, built in 1906, at 175 Broadway in Williamsburg (hence the bank’s name). The Broadway location, also a magnificent building, is still a bank, although now an HSBC. 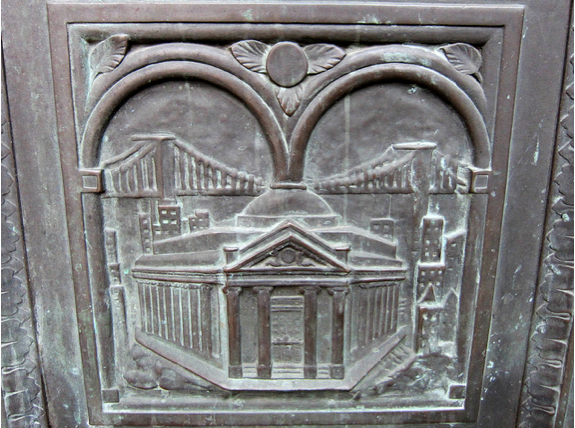 The Dime Savings Bank and the Brooklyn Bridge, pictured on the bank's front doors.

A few blocks from the Williamsburgh Savings Tower is another of Brooklyn’s most majestic banks–the Dime Savings Bank of New York at 9 Dekalb Avenue. Now a Chase bank, the 1908 building still maintains its original gorgeous lobby, where monolithic red marble columns circle the main hall, which you enter through bronze doors that include a relief of the bank in front of the Brooklyn Bridge and Mercury, the god of industry and thrift. Ionic columns line the exterior and a pediment at the front is decorated with sculptures of two men symbolizing agriculture and industry.

Designed by Mowbray & Uffinger, the firm that created many of the grand banks of the early 1900s in New York, the building incorporates into every place possible the dime with the head of Mercury that was the bank’s symbol. Once upon a time, savings banks aimed to help laborers to save money through regular deposits, and the first savings bank was sponsored by the Society for the Prevention of Pauperism. The Dime Savings Bank was established in 1859, early on in this movement, and several of its buildings still stand, including another at 1101 Avenue J that is now a Chase.

Most Brooklynites have noticed that an unusually glamorous building houses the Trader Joe’s at Atlantic Avenue and Court Street, and it’s worth paying extra attention to the details that can easily be missed. Formerly the headquarters of the Independence Savings Bank, known until 1975 as the South Brooklyn Savings Bank, the building still retains its symbols of thrift, including squirrels holding a planter out of which a wealth of corn grows for the birds above, on the exterior railing. There is also a commemorative plaque to George Washington and the 1776 Battle of Brooklyn on the façade. 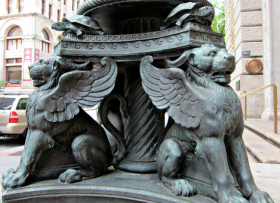 A short walk away in Brooklyn Heights at 177 Montague Street is the former Brooklyn Trust Company, which now contains a Chase bank branch. The design by York & Sawyer was meant to mimic the Palazzo della Gran Guardia in Verona on the exterior and the Baths of Caracalla on the interior, and the 1915 building still impresses with massive bronze lamps springing out from its sides and torchieres decorated with winged lions and turtles guarding the entrance.

While the era of glorious architecture for Brooklyn’s local savings banks and trusts, as well as their reputation for multiplying workers’ hard earned cash, ended with the Great Depression, the buildings remain a part of the cityscape. Others include the former Kings County Savings Bank at 135 Broadway which was built in 1868 and now contains the Williamsburg Art & Historical Center, and the old Greenpoint Savings Bank at 807 Manhattan Avenue which was completed in 1908 and boasts a Pantheon dome–now a Capital One. A keen eye for columns and money management symbols (look for stone squirrels) on the streets of Brooklyn can turn up reminders of the days when a bank’s architecture reflected the wealth within its walls.