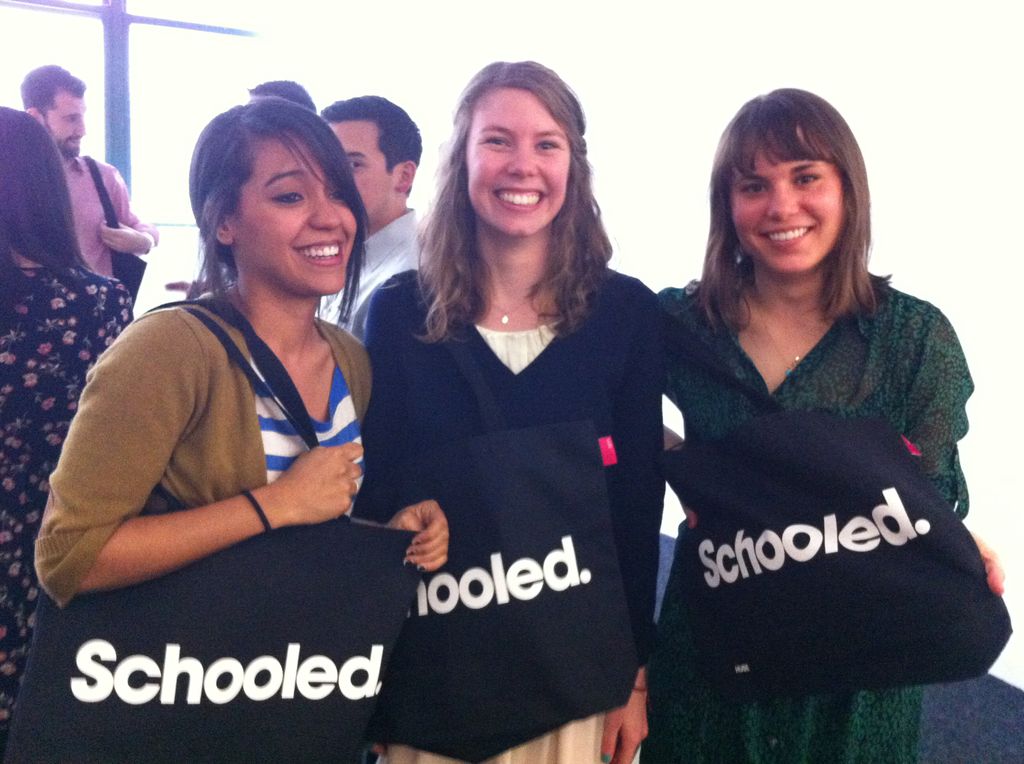 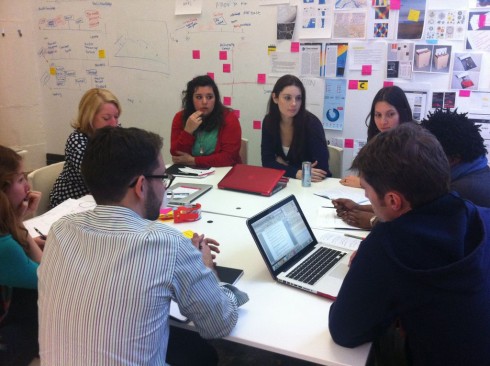 Students at work at Huge School.

Sara Chipps’ tech education started early. She learned to code when she was still in high school. She studied computer science in college. When she left school, she landed a job at a tech company in New Jersey, where she learned that despite all her training and efforts, her tech skills still weren’t up to snuff.

“Everything I know about software development, I did not learn in college,” she says. “There’s really no university out there that teaches web development. They hired me knowing that I’d never done this before and that they’d need to train me. That’s how I got started. I found people who believed in my skill set, and they taught me.”

Fast forward six years to the present. It’s currently Internet Week in New York, and more than 45,000 people from around the world (wide web) are here celebrating the advancements of the city’s digital culture and tech scene, one of the fastest growing economic sectors in the city.

Yet Chipps on-the-job training is still common because there is a huge talent gap within web companies. By some estimates, there are four jobs in New York for every developer, a shortage that has lead to the creation of new initiatives intended to train the next generation of web developers and entrepreneurs–many of them in Brooklyn. 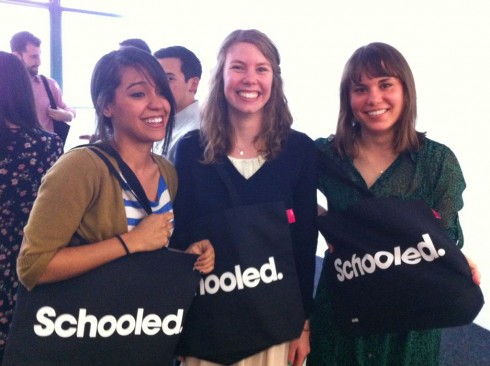 These ladies got schooled, by Huge.

“One of the biggest challenges with our business is that there’s just a shortage of really great digital talent,” says Shirley Au, President of Huge Inc., a digital advertising agency in Dumbo that started as a web design shop in the neighborhood in 1999. As one of the earliest digital companies to establish itself in Brooklyn, Huge is ahead of the curve in many ways when it comes to implementing training initiatives to attract new talent.

“Only in the past few years are there even schools and curriculums dedicated to the space, and as a result, there were just too few people that we could recruit,” says Au. So last summer Huge launched its own digital training program. “It’s basically a half-million-dollar investment for us each year to run the school in the summer and in the winter.”

Huge isn’t the only tech titan in Brooklyn trying to close the talent gap. Etsy is also attempting to attract more developers beyond the typical applicant pool (there’s a lot of testosterone in the tech industry). The irony of having few female developers on its payroll, despite being one of the most popular e-commerce websites in the world for women was not lost on Etsy’s executives. Earlier this spring, the company announced plans to offer 10 female programmers each $5,000 grants to receive training at Hacker School–a three-month-long programmer training session intended to help students develop stronger coding skills (the next session starts June 4 at Etsy’s headquarters in Dumbo). Hacker School,  which is open to all–the Etsy grants are intended for women–is free but a full-time commitment; the grant money is intended to offset expenses for grant winners while they attend.

The labor-and cost-intensive measures to find employees at Huge and Etsy are indicative of the fact that New York’s tech community has bounced back from the bubble burst of 2001 to become one of the city’s most lucrative economic sectors. One of the brightest stars in Silicon Alley is Gilt Groupe, the designer flash sale site founded by Alexis Maybank and Alexandra Wilkis Wilson, part of which operates out of the Brooklyn Navy Yard. Gilt is currently valued at a billion dollars after only three and a half years in operation, and now its founders, who recently published the book, By Invitation Only: How We Built Gilt and Changed the Way Millions Shop, are wielding their considerable influence to help other start-ups.

“Alexandra and I actively mentor many emerging entrepreneurs in New York, advise startup businesses and have even invested in some as well,” Maybank says. “Along with Gilt, we host a women in digital media gathering and participate in conferences, and organizations like TechStars”–which provides start-ups with access to seed money and mentors from some of the industry’s brightest entrepreneurs.

As two of the most prominent women working in what is still primarily a boys club, they recognize their role as mentors. “I hope that we can encourage more women to start big, disruptive businesses,” Wilson says. “In general, it would be wonderful to see more women study sciences and computer engineering so that companies can have more female engineers and developers. That is something that both Alexis and I hope to see change in the future.”

The two support a skills-building organization for high school students called Girls Who Code, but there are other tech-ed initiatives for adults now coming to the forefront, such as Girl Develop It, Codeacademy and the soon-to-launch website Skillcrush. 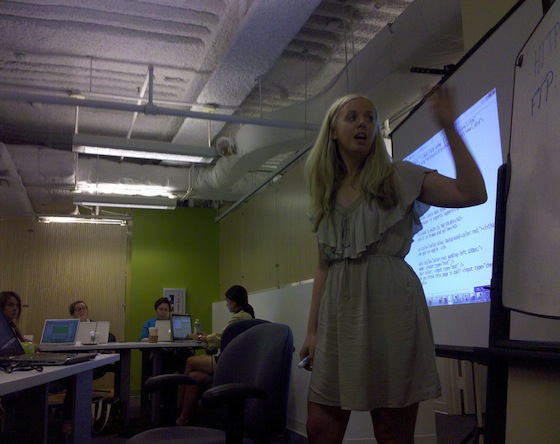 Sara Chipps leading a tech workshop for Girl Develop It

Since her first tech job in New Jersey, Sara Chipps has parlayed her programming skills into a new position as chief technology officer at Levo League, an online social network for young professional women headquartered in Manhattan. In her spare time, she encourages other women to attain a tech education through Girl Develop It, an organization she helped found in 2010 to teach women web development through technical workshops.

“Web development has changed my life,” she says. “I really enjoy being part of a community that’s really passionate about what they do. Tech is not just some guy in a basement with a computer. It’s super fun and you get to do all kinds of stuff you’d have never predicted.”

Adda Birnir and Kate Reyes co-founded Skillcrush with the intent to add a layer of transparency to technology and make skills like coding more accessible to everyone through a series of explanatory web tutorials. When it officially launches in August, the site, which is not just for women but definitely female friendly, will help users learn to talk tech–it offers a weekly vocabulary lesson to assist in deciphering tech jargon–and also teach them how learning programming and web development skills are important stepping stones for them to achieve their ultimate goals, whether they’re starting a blog or web-product company or becoming more attractive candidates for potential employers.

“Skillcrush started as a side passion project aimed at getting more women involved in tech then it kind of just snowballed from there,” Birnir says. “There are so many points of entry into tech and so many ways in which women can contribute, but on top of that, every technical skill you get makes you better at contributing. Learning a little bit of code is going to make you so much more valuable in your job and give you more insight into the products that you’re building.”

The learn to code it yourself scene is not all girl-centric, either. Zach Sims and Ryan Bubinski started Code Academy last summer as a way to coax more people into programming by making learning to code free and fun not frustrating. Their interactive website teaches visitors the foundational tools for programming and developing digital content. Users can learn basic coding, take courses in Javascript and learn programming languages like Ruby and Python among other skills.

Up until now initiatives aimed at offering advanced tech training have been privately funded for the most part. However, the New York City Council has taken a more active role in supporting the city’s tech scene by addressing the need for digital training programs. Recently, they announced plans for a tech certification program through CUNY expected to launch this fall, the curriculum for which was developed with the help of digital companies like Huge to ensure its graduates acquire the necessary skills for employment in New York’s tech industry.

“One of the dual priorities of the City Council is to create more good paying jobs for New Yorkers and ensure that our residents are qualified for these jobs,” says Christine C. Quinn, City Council Speaker. “Right now, we are witnessing solid growth in our tech industry that will lead to increased employment opportunities at these firms. To ensure that New Yorkers get these jobs, we are working to increase access to tech education for our workforce that will prepare more New Yorkers for employment in this sector and help to keep these good jobs in our city.”

Tech education was still a road less traveled when web developers like Chipps started out, but she says these new initiatives are paving the way for today’s generation of programmers and developers.

“I’ve been doing web development for 10 years now,” Chipps says. “If these programs had been around when I was learning, it would have been a lot easier.”