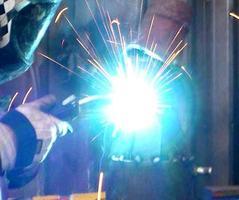 There is a building on Butler Street with decaying bay doors and not much else.  There isn’t even a sign if you’re trying to find out whether you’re in the right spot for a class.  But to the trained eye the railing up the front steps, with all of its random parts welded together to create a functioning art piece, would tell you all you need to know.  Because through those bay doors, covered in peeling blue paint, is the metal shop for the Madagascar Institute.

The haphazard nature of the shop makes you think of your grandfather’s ancient garage that has never been properly cleaned and holds innumerable treasures of tools.  Or at least you think there are tools somewhere in there. This cluttered den of creation is home to a ragtag group of artists, professionals, and amateurs who spend their time piecing together things like giant rebar sculptures, chariots, and some sort of jet engine.  There’s even a mechanical bull in the middle of the room that’s slowly being brought to life.  It’s around this half built metallic beast that the classes are instructed, and it’s where, on a Saturday afternoon, I went to learn about MIG welding.

At two in the afternoon we were met by our instructor Gaylen, frantically trying to make a bunch of equipment work, while frantically looking for a bunch of things, while frantically drinking a SixPoint tallboy.  The beginning of class was a little bumpy, with a lot of starts and stops due to equipment ill temper and what seemed to be Gaylen’s forgetful nature and need to break the ice by cursing incessantly.  But after a short time, and a somewhat spinning in place half-tour of the shop, the class began to take shape.  There was a simple objective: get people comfortable with the tools in the shop and teach the basic skills needed to actually weld.

In this manner, we each cut a foot long piece of square metal piping on the chop saw to use as our personal test piece.  From here we took it over to the grinder to smooth out any jagged edges and soon  found ourselves around the metal table where we would begin to actually weld.  Gaylen took us through the basic mechanics of the process by explaining all of the different pieces of equipment that are involved and then handed out safety masks and warnings.  We all decided on a safety word to be said whenever anyone was about to weld, producing an extremely bright and “harmful to the eyes” spark, giving others enough warning to flip down their masks and save their retinas.  And so we welded.  First basic straight lines.  Then joining two pieces of metal together.  And finally, each taking a turn to weld our pieces to one another to create a sizable community art piece.  The finale came when Gaylen took the piece and threw it straight up in the air and out of the bay doors where it collided with significant force with the sidewalk below.  Resting on the sidewalk after the impact, the class was surprised to see no piece out of place.  We had all made welds that would hold, even under that type of punishment.

Downside: Even though the skills we came to the Madagascar Institute to learn were taught in the class, it was hard to sustain that thrill and empowerment when I went home afterward.  A simple solution would be to create a project that focused on the skill, in this case welding, that could be taken home in order to showcase your mastery of the art of welding.  Physical mementos of accomplishments make classes 10x better.  Plus it’s free advertising.  Wink, wink.

Bottomline:  If you can get past their chaotic sense of order and operations and see the great characters that end up being great teachers, then there’s no reason why you should pass this up.  Plus at only $60 for both TIG and MIG welding, you won’t break the bank familiarizing yourself with a skill that this city was built on. Other than rock and roll, of course. Pass!

Madagascar Institute  is located at 217 Butler Street, between Nevins and Bond in Gowanus, Brooklyn.  A class schedule, filled with all sorts of flying sparks and metals liquifying can be found at their website www.madagascarinstitute.com.

Keith Holser is the author of nothing.  His writing has appeared on the screen above this blurb. He is currently unemployed and lives somewhere between his parents house in the suburbs and his girlfriend’s place in Bed Stuy.  We’ll let you know how things transpire.