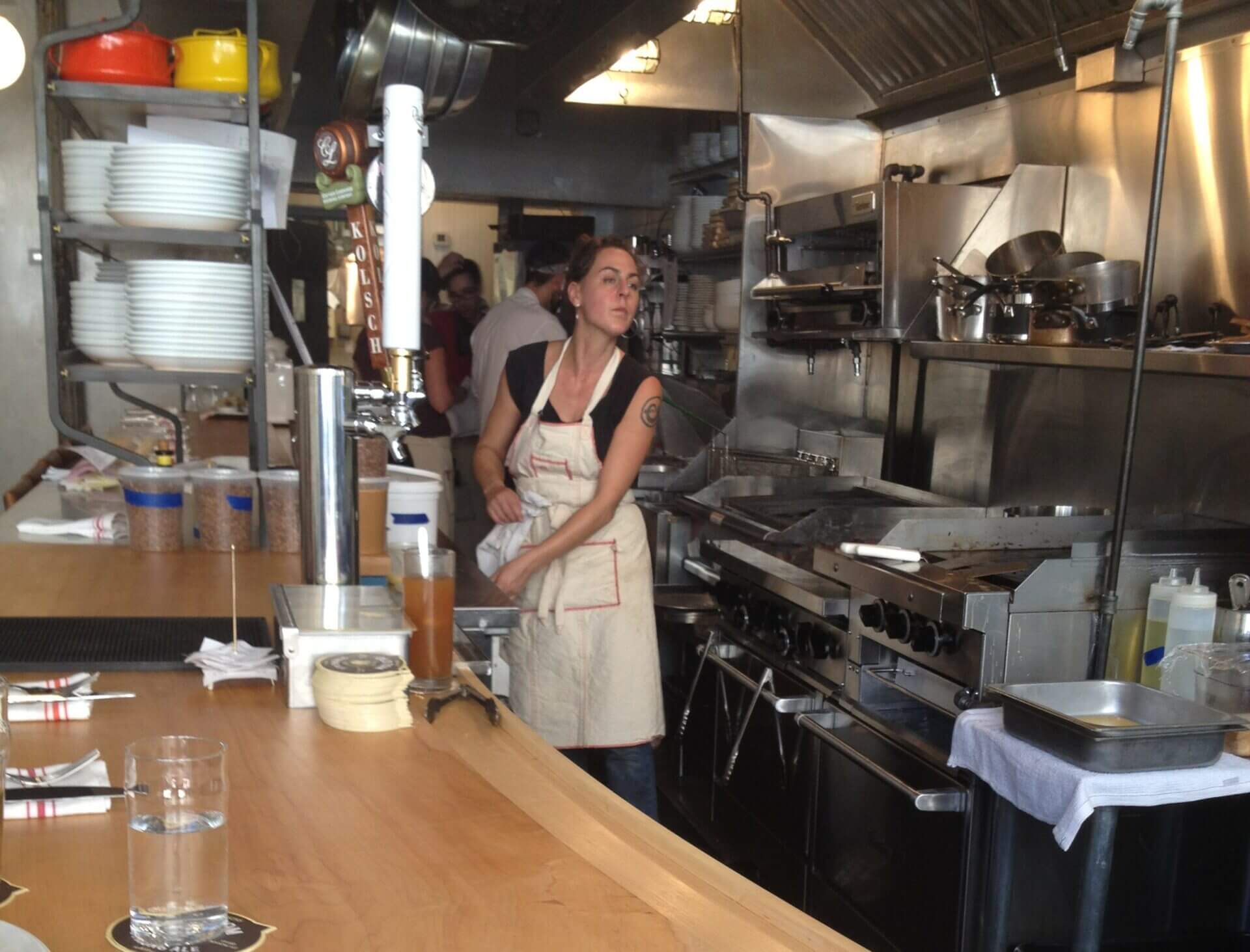 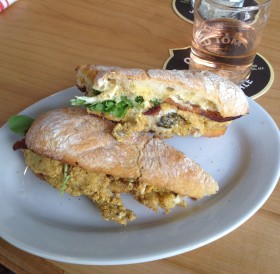 Fried oysters, Meyer lemon marmalade, greens and bacon. With a side of rosé.

Potlikker, a new restaurant with chef Liza Queen at the helm, opened quietly last Friday, serving a daytime menu, with a night menu to come soon. In a the era of frenzied food buzz about new restaurants, this stands out as the place that chefs, rather than bloggers, have been waiting for and gossiping about over beers since word hit the street last winter that Queen had taken on a 14-year lease in the Bedford Avenue space that was once occupied by Bonita.

It’s hard to find an article about Queen that doesn’t describe her, or her food as “quirky” or “eclectic,” as though she employs Zooey Deschanel and Juliana Hatfield to hand-embroider aprons for the staff and pipe ketchup designs onto meatloaf cupcakes. There’s nothing twee or dear about Queen or her food. Rather, it feels personal–it’s all ingredients and techniques that she loves and has continually added to her repertoire over years of moving around the country as a cook. “Along the way I pick up foods I can’t do without–you’ll always see them on my menus,” she says. 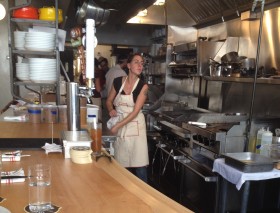 Liza Queen, scanning the room from the kitchen.

One of the newer additions to Queen’s go-to ingredient list (which right now also includes asparagus and English peas, as well as shellfish) is sticky rice, which she learned to love, and consider comfort food while working in restaurants in Vietnam.

Though you won’t find evidence of her time in Asia on the day menu, the night menu, which she plans on starting to serve in a week or so, includes a seafood hot pot. “It’s party food,” Queen explains. “It’s the most convivial, gracious dish around. In Vietnam it was served at any kind of special occasion, usually at the end of an epic meal.” Though her original hot pot idea had diners cooking their own seafood and greens at the table, Queen says that logistics–including how to make the combination of open flame and raw seafood at a small restaurant table legal and safe–changed the dish.

The Potlikker hot pot will be served family style, for the table in brightly-colored enameled Dutch ovens that Queen’s general manager found on eBay. Though the dish will change seasonally, adding in tomatoes once they’re ripe and ready, it will start with a lobster stock, with chorizo, shellfish, and grilled fish for a bit of firey smoke, served with crostini. Queen says that she’ll lighten some elements as the summer grows warmer.

Queen spent two years working in restaurants in Vietnam after closing her first Brooklyn restaurant, The Queen’s Hideaway, which is where her fan base of chefs, and diners with a will to get weird, first developed. At The Hideaway, Queen, with the help of sous chef and pastry maven, Millicent Souris (Souris went on to cook at Egg and Roebling Tea Room, and has a book coming out on June 1 called, How to Build  a Better Pie, which Queen predicts “will be the most entertaining read with smart, fun interesting recipes”) served an ever-changing menu of Southern-inflected dishes. But we’re not talking fried chicken and pulled pork sandwiches. On a given night you might have found hasenpfeffer–a vinegary rabbit stew on the menu, alongside some variant of a savory Dutch pancake, layered with greens and perhaps studded with pork that had been smoked in the restaurant’s backyard. Greenpoint just wasn’t ready for a $20 plate of surprises (and perhaps it still isn’t), but now that Williamsburg has an overabundance of completely unsurprising $20 plates of food, Brooklyn seems primed for Queen’s cuisine.

Other dinner dishes that she has planned include a brick chicken with a fiddlehead, snap pea, asparagus ragout and sticky rice; and a fried oyster, asparagus, pancetta dish, served over a potato base that is one of her oldest and most favorite recipes, which she learned while working in Portland at a long-gone restaurant called La Catalana, under chef Richard Recandone.

“I was a dishwasher and did day-time prep,” says Queen. “He was just my hero–he’d kill me for not being precise and detail oriented and caring and I just wanted to do a good job for him be worthy of the food I was making. I’m pretty sure I was working at night too, just to eat for free.” From Recandone, she learned to slice potatoes thin, layer them with garlicky aioli, and then put them in the oven, under wax paper, low and slow, pulling them out a few hours later to add more aioli and then back in under the broiler to brown. “I have not changed that recipe since I learned it,” she says.

And what’s on the day menu? “These are things I’m always wishing were on the menu when I go out to eat during the day, which is rare,” says Queen. Eggs dishes, with savory rye French toast. Sandwiches like fried oyster po’boys, a rueben with corned beef tongue and buttermilk dressing and meatloaf on a Parker House roll. Queen’s favorite element though are the ploughman’s platters–plates like sunflower bread with house-made gravlax spread, Landaff cheese, celeriac homefries and half-sour pickles. And that makes sense–they’re delicious, and slightly surprising combinations that incorporate the kitchen and the diner in the final product. “I just like that, it’s how I want to eat,” says Queen. “Where you get to pick and choose and make different perfect bites.”