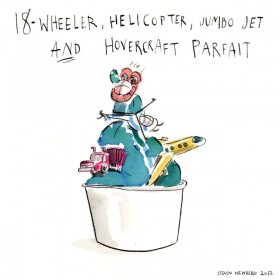 Where in Brooklyn do cows, dinosaurs and hovercrafts collide?

Steven Weinberg, illustrator and Brooklynite extraordinaire, has the answer.  His upcoming show Dairy Cow Dream at Culture: An American Yogurt Company (331 5th Ave. in Park Slope) opens Saturday July 15 (5-7pm) and features his quirky collection of soft serve-centric cartoons.  We caught up with Steven to learn more about his dairy-infused endeavor.

So how did this whole thing get started?

I’ve been doing a weekly cartoon for Fucked in Park Slope for about three months now.  We’ve been getting interest from readers who wanted us to do more current things, and the latest controversy in Prospect Park is parents who don’t want the ice cream guys in the parks.  They want only organic, no corn syrup.  I didn’t want to be snarky or anything like that, so I got the idea to do something more light-hearted with just a full on cow, where you pay $5 a minute for milk.  I guess that spoke to the people at Culture.  I’ve never met them, but I really like their yogurt. 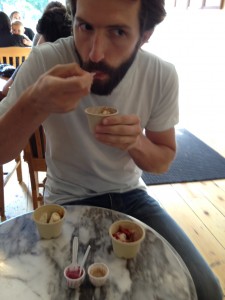 Is displaying artwork something they do regularly?

This is really unusual.  When they opened up a year ago, they had a photographer take some nice pictures of their process, but they haven’t shown any artwork.  When they approached me, they said they wanted to feature my work all summer and into the fall.  It was very flattering.

Are you going to add new pieces to the exhibit as time goes on?

There are 15 pieces, and I figure that’s a good number.  I thought about adding more because I definitely have more ideas, but my girlfriend said they were too disgusting.

What were some of the ideas that she vetoed?

One was just a giant big gulp jammed into frozen yogurt.  Another one was “the chicken option,” where I fashioned bathtubs out of the cones.  Then the cones were going to be a beak.  And then I added hot wings… that one was just disgusting. 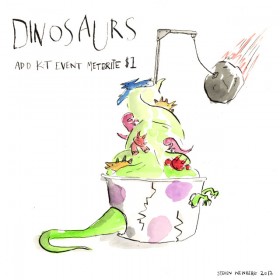 So cows, I get it.  Tattoos in Brooklyn, obviously.  But dinosaurs?

This yogurt place moved in a year ago, across from a big park that just opened up this summer.  It is just packed with kids, so Culture is like the Good Humor Man that’s better for you.  I do a lot of work that’s kid-oriented anyway, so I wanted to have stuff in the yogurt shop that made kids freak out and say, “ahhh no way!”

Which is your favorite cartoon?

The cow one.  I just love the scale of it, the improbability of a 12-meter tall vat of soft serve.  But I would actually eat the Sunday morning one, with a little bagel, lox capers and cream cheese-flavored yogurt. 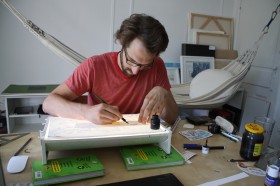 What’s next on the horizon for you?

I have a bunch of different things that I’m working on.  Picture books, lots of stuff for kids and I have a middle-grade graphic novel that’s in development.  I also made some connections at Brooklyn Boulders and wrote up a whole picture book about kids climbing.

How does Brooklyn inspire your work?

Living in Park Slope, kids are on my mind because they’re everywhere.  You see them all the time and think, that kid needs and ice cream cone with some dinosaurs.  And there are so many fun characters.  I need to do something with Marty Markowitz.