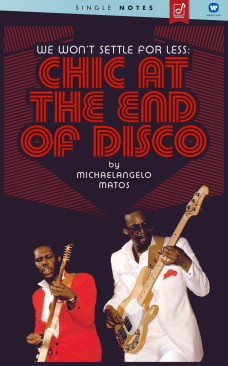 Guitarist Nile Rodgers and the late bassist Bernard Edwards don’t often get the credit they deserve for their influence on pop music. They were the driving force behind the great ‘70s New York City funk rock band Chic, best known for hits like “Le Freak,” “Good Times” and “Dance, Dance, Dance (Yowsah, Yowsah, Yowsah).” When disco faded and the hits dried up for Chic in the early ‘80s, Rodgers and Edwards became the preeminent producers and songwriters for other artists both together and individually. Collectively, their credits include songs by David Bowie, Diana Ross Madonna, Duran Duran, the Power Station, Sister Sledge, the Vaughan Brothers and the B-52s.

Kensington-based music writer Michaelangelo Matos puts Rodgers and Edwards’ importance in perspective in a recently-published e-book, We Won’t Settle For Less: Chic at the End of Disco. The critically astute, thoughtful book is part of the Rhino’s Single Notes series, a publishing venture by reissue label Rhino Records.

Fans of music journalism will most likely recognize Matos’ name–his work has appeared in Rolling Stone, New York Post, and The Village Voice; he is also the author of the 33 1/3 book Sign O’ The Times, about the Prince album of the same name. He uses the Chic song, “Good Times” as the framing device for his most recent book. “‘Good Times’ fits with what I think of as a post-standard,” Matos told me, “something where the recording as source material is plundered a lot–the actual song itself or the actual composition itself is being covered or transmuted by others a lot. So I thought it would be an easy record to write about and it was. I knew there was a lot to unravel or unpack or talk about—it was mostly a matter of just sitting down and writing out all of the stuff.”

Described by Matos as the archetypal New York band, Chic emerged during the heyday of the disco period but they were different from the other disco groups. As Matos points out, disco seemed like a footnote in the context of rock.

“You know the John, Paul, George and Ringo shirts that everybody wears, or the Michael, Jackie, Marlon, Tito and Jermaine [Jackson] one? I always wanted to custom make one that was [of Chic members] Nile, Bernard, Luci [Wright], Alfa [Anderson] and Tony [Thompson],” he said. “I remember telling somebody this and they were like, ‘Who’s that? That’s really obscure.’ It’s like, ‘They sold more records than almost everybody in their fucking era! What do you mean obscure?’ It’s ridiculous.

“Chic probably in the end have had maybe not the full impact of a Bob Dylan,” Matos later said,  “but they had comparable impact. You cannot get away from what they did. Those records were probably as sonically important as Zeppelin…”

“The one thing about Chic was they were a live band,” said Matos. “They were a live band that cooked; they were probably the greatest rhythm section ever. Tony, Bernard and Nile were a complete powerhouse unit. They could play anything and they play it harder and better and more accurately and still leave in that human feel…”

“Good Times” may sound like a celebratory anthem, but Matos said that Chic, despite being aspirational, was also making fun of the high life. “The singers don’t sound like they’re having a good time singing that song at all. They want to live the nice life, they want to live the high life. But at the same time, they’re sort of criticizing it from the inside. They don’t totally buy into it. You can tell it’s a beautiful illusion but they’re not completely convinced of it. At the same time they’re not turning away from it either.”

Rodgers and Edwards’ run as behind the scenes superstar producers began as Chic’s career faded into the ‘80s. But “Good Times,” particularly Edwards’ bass groove, would strongly influence, and then live on through two tremendous hits that came after: Queen’s “Another One Bites the Dust” and “Rappers Delight” by the Sugar Hill Gang. “It’s like try to get it out of your head,’” Matos said of “Good Times.”  “Nobody could. It’s the tune you go around humming, except in this case it was the bass line.” 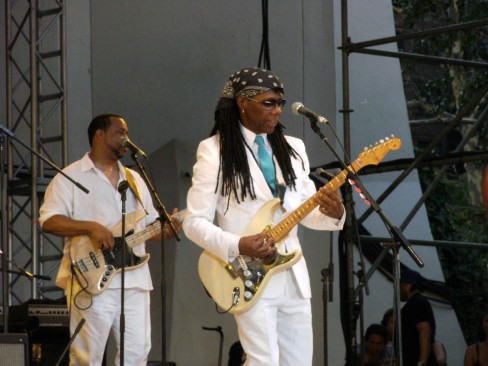 Nile Rodgers and the CHIC Organization at Lincoln Center, July 25, 2012 (by David Chiu)

Rodgers currently leads a latter-day version of Chic. Meanwhile, Chic has been nominated several times for induction into the Rock and Roll Hall of Fame—an acknowledgment of their important contributions to music.   “[Bernard Edwards is] probably the greatest bass player who ever lived,” Matos said. “ He probably came up with more great bass lines than anybody aside from James Jamerson or Paul McCartney. He’s in that league.”

As for Nile Rodgers, Matos pointed out his instrumental talents in a song he performed on called “I Like Love” by former Chic singer Norma Jean Wright. “It’s a rhythm lick,” he says.  “[Nile] kind of goes to town on it. Instead of a Bernard Edwards solo, you get a Nile Rodgers rhythm guitar solo, and it’s just breathtaking. That was the track that just made me go, ‘Oh my God,’ just incredible, a great piece of music.”

Michaelangelo Matos’ ebook, We Won’t Settle For Less: Chic at the End of Disco, is available now. For information, visit www.rhino.com/article/single-notes.