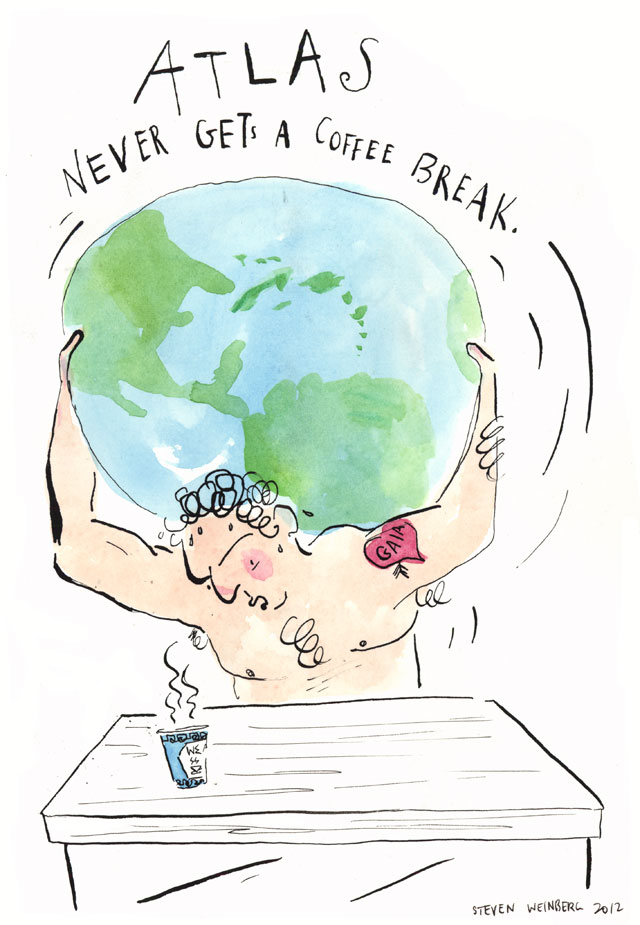 For Park Slope artist Steven Weinberg, inspiration can strike anywhere–on a two-year adventure around the world, which he illustrated in the memoir To Timbuktu, written by his girlfriend/collaborator Casey Sciezka. At Mission Dolores bar, where he’s been known to throw drinking and drawing sessions called  Shitty Kitty. Or at Café Grumpy, while drinking coffee.

“I could talk about coffee and cafes all day long,” he told BB. “It’s just the perfect way to start a day, and give you a break in the middle of one to recharge. There’s something about working largely alone as an illustrator and artist where I need those kinds of breaks. In another life I’d be a nonstop smoker.”

His local caffeinating spot is the Park Slope outpost of Café Grumpy. Last year, with a show at the cafe slated for August and a trip to Columbia booked for July, he decided to visit one of the farms where Grumpy sources some of its beans. Co-owner Caroline Bell loved the idea, and the farmers and their vistas became the first collection of Weinberg’s coffee-inspired watercolors.

His frequent cups of Joe have fueled another body of work at Grumpy’s original Greenpoint café, on view now through the end of October. Georgia O’Keefe, Frosty the Snowman, even Jesus Christ are among the historic and pop cultural figures in his series, “Important People Drinking Coffee.”

“My inspiration was the universality of coffee. People drink it everywhere, and have been drinking it for a long time, and all in their own ways. So I figured I couldn’t really run short of material in that vein.”

So far, Yuri Gagarin, the Russian Cosmonaut and first human in outer space, and Cookie Monster have sold. The remaining 11 watercolors are available for $80 apiece, aside from the one of JC, which is $120.

Check out a few here, and see the full show at Café Grumpy in Greenpoint, 193 Meserole Avenue at Diamond Street, G to Nassau Ave.